If You Haven’t Read The Book…

Indeed. As I wrote this morning in a comment thread, 1970 was the year of the Big Shiftover and the Big Comedown — the first full annum after the gloom-and-crash realization that the hippie social-ferment years of the ‘mid to late ’60s (when some were convinced that some kind of Millenial flowering or spiritual revolution would profoundly change everything) had failed to take root or manifest. A time of things starting to break loose and fall apart. Post-euphoria, post-Woodstock, post-Altamont, the year of the Manson murder trial. “The dream is over…what can I say?” The drug deaths of Jimi Hendrix and Janis Joplin. “Love the one you’re with”= the dawn of one of the greatest eras for nookie in human history, particularly among the middle-class. But still a sense of depression and transition.

The final breakup of the Beatles & the surging of the Blues and the Stones. A year before “Sticky Fingers,” two years before “Exile on Main Street.” The second year of the Nixon administration & a dawning sense that things were drifting toward glumness and paranoia. The galvanizing of the anti-war movement with Vietnam raging on. Two years after the January ’68 Tet offensive, two years before the snapping of that awful photo of that little nine-year-old naked girl burned by napalm. But also a year in which the beginning of the most fertile and exciting period in Hollywood history was just starting to be felt. The Easy Rider effect was spreading and yet Martin Scorsese‘s Boxcar Bertha (not a great or even an interesting film but the beginnings of one of the greatest mainstream-cinema careers of all time) was two years off. Patton opened in early April, in some situations in Dimension 150. 1970 also witnessed the first cultural stirrings of the Me Generation, an early manifestation being Werner Erhard’s EST (Erhard Seminar Training), which first began in ’71. All in all 1970 brought about a gradual sinking feeling, a sense of “oh, okay…well, that didn’t work,” that others would fail you, that you needed to be extra-careful and fortify yourself…that you had to grim up and get down to it.

To what extent PTA’s Inherent Vice will reflect or express aspects of this cultural comedown feeling is anyone’s guess. My guess is that it will steer clear of it for the most part (PTA is not a documentarian) in favor of the mood-atmosphere stuff — the banal trimmings, the ephemera, pickings from Gilligan’s Island or Herb Alpert or Glen Campbell records or whatever, Joaquin Pheonix’s unmanicured peds, head shops, beads and tie-dyed T-shirts, etc. 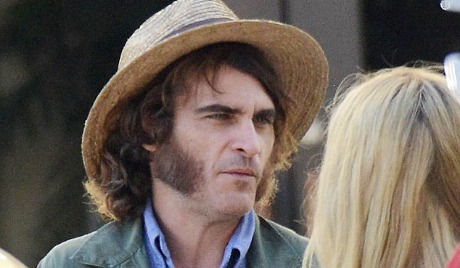