Gold Derby‘s Tom O’Neil is reporting that while Focus World, the nickel-and-dime, straight-to-VOD division of Focus Features, will not launch an Oscar campaign for David Cronenberg‘s Maps to the Stars or its Cannes-honored star Julianne Moore, the producers “are in the running for Golden Globes, BAFTA, film critics’ trophies, and SAG and other guild awards. In fact, discussions are currently underway with the film’s handlers and all of those awards, which are much easier to win without hefty campaign investment required at the Oscars.

“Many of the guilds like SAG have screening committees that decide nominations and are easy to access for a reasonable investment,” O’Neil explains, “and so voters in the film-critics groups can be targeted efficiently. In fact, many of them are seeing Maps today at the Toronto International Film Festival. By contrast, to launch Maps effectively into the Oscars derby could cost up to $20 million, which is what many frontrunners have spent in recent years. Technically, a film may qualify after unspooling just one week in a L.A theater just like the Globes, but it needs a fullblown campaign to bring it to the attention of lazy Academy members who insist upon private screenings, personal copies of the DVD and more.

Here’s to the late, great, fearless Joan Rivers and the beautiful idea of working, striving and turning it on until you drop. And if working really hard means you leave the earth a little sooner, fine! Quality, not quantity. “What a fighter she is…God!,” I wrote on 4.18.10 after seeing Ricki Stern and Annie Sundberg‘s Joan Rivers: A Piece of Work. “Frank and blunt, nothing off the table, takes no guff, lets hecklers have it in the neck, never stops performing, tough as nails.

“I’m a late convert to Joan Rivers: A Piece of Work, having missed it at Sundance and only just seen it a couple of days ago. I had relegated Rivers in recent years to an ‘uh-huh, whatever’ status, partly because of her irksome red-carpet chatter and partly because of her 21st Century facial work, which suggests she may have been hurt in a terrible car crash (worse than Montgomery Clift) but was lucky enough to find a gifted plastic surgeon who was able to make her look as normal as possible.

Which of the two Al Pacino films currently screening at the Toronto Film Festival is the better ride? David Gordon Green‘s Manglehorn, apparently, as it has a slightly higher Rotten Tomatoes rating (67%) compared to Barry Levinson‘s The Humbling (57%). Worrisome quote #1: “The Humbling could also be called The Bewildering” — Nicholas Barber, BBC. Worrisome quote #2: “An apter title might have been The Bumbling” — Robbie Collin, The Telegraph.

I’m all set to attend a demonstration next Thursday of Douglas Trumbull‘s MAGI process, which aims to be the most dazzling and fluid high-frame-rate process yet at 120 frames per second. On top of it being a 3D process projected at 4K. The mid-day demo will happen in Toronto, and has been relatively difficult to get into. My interest was sparked by Scott Feinberg‘s 9.2 piece about MAGI in The Hollywood Reporter. I know, I know…the rejection of high-frame-rate photography in Peter Jackson‘s The Hobbit (which used a 48 frame process) means nobody wants to go there again…right? Trumbull claims otherwise in his conversation with Feinberg. I’ve been told since the early days of the 60 f.p.s. Showscan process, which was first unveiled in the early to mid ’80s, that the human eye can’t differentiate between 60 f.p.s. and 120 f.p.s. I saw a demo of differing high-frame-rate test reels at a Los Angeles SIGGRAPH conference in 2012, and I couldn’t really tell. There’s an easy-to-spot difference betwewen 24 f.p.s. and 48 f.p.s., but not so much between 48 and 60 or 120.

In his 8.30 Telluride review of The Imitation Game, Variety‘s Scott Foundas was initally none too charmed: “Nothing is too heavily encrypted in The Imitation Game, a veddy British biopic of prodigal mathematician and WWII codebreaker Alan Turing, rendered in such unerringly tasteful, Masterpiece Theatre-ish fashion that every one of Turing’s professional triumphs and personal tragedies arrives right on schedule and with nary a hair out of place.” Then it got worse: “More than once during the accomplished (but not particularly distinctive) English-language debut for Norwegian director Morten Tyldum (Headhunters), you can catch the ghost of the late Richard Attenborough nodding approvingly over the decorous proceedings.” Aiyeeeee!…worse than Banquo!

Then he relents and warms up: “And yet so innately compelling is Turing’s story — to say nothing of Benedict Cumberbatch’s masterful performance — it’s hard not to get caught up in this well-told tale and its skillful manipulations. Likely to prove more popular with general audiences than highbrow critics, this unapologetically old-fashioned prestige picture (the first of the season’s dueling studies of brilliant but tragic English academics, to be followed soon by The Theory of Everything) looks and feels like another awards-season thoroughbred for U.S. distrib Harvey Weinstein.” 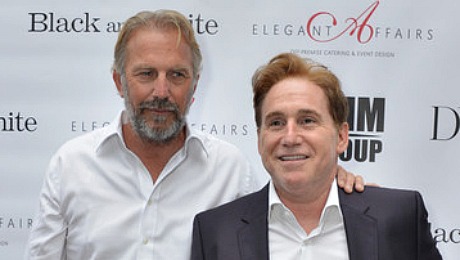