I didn’t attend this Deadline-sponsored q & a between Dominic Patten and Humbling star Al Pacino, but I attend a similar session last night at the Sherman Oaks Arclight between Pacino and Deadline‘s Pete Hammond. And it was almost all fun. I loved the stories Pacino told about being cast in The Godfather (he originally wanted to play Sonny) and how Paramount executives wanted to fire him because he was playing Michael in what they felt was an overly submerged and muffled way, but then he saved himself when he performed the Italian restaurant assassination scene. “They just wanted to me shoot somebody,” Pacino recalled. Here, again, is my own recent discussion with Pacino.

The pigs, of course, are the Walmart executives who fund this systematic torture, primarily because of the life-long confinement of squealers in gestation crates. Eff this vile industry. Forget about the taste of dead pigs altogether. Who eats pork anyway? I do but very guiltily. On rare occasions I’ll eat a couple of sausage links with a plate of scrambled eggs, and every now and then at a diner I’ll order blast-furnace, volcanic-ash bacon. And I feel like an idiot every time. Okay, I’m giving it up. Never again. Joaquin Phoenix was kind of bad in Inherent Vice but standing up for pigs is the right thing. Seriously. 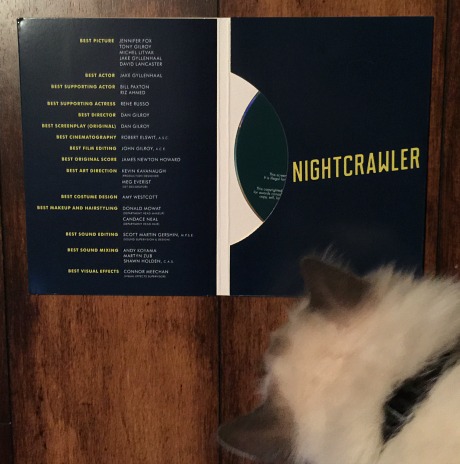 Nobody wants to listen or acknowledge, but Kevin Costner gives the finest, most layered and deep-downiest performance of the autumnal phase of his career in Mike Binder‘s Black or White (Relativity, 12.3). Why haven’t I been pushing his performance more or putting him on my lists? Because almost nobody is with me and I’m not brave or defiant enough to stand up alone. Which means that to some degree I’m a coward. But I’m telling the serious truth here about the quality of Costner’s performance. Watch the film and tell me I’m wrong.

It finally hit me last weekend why Costner isn’t getting any award-season traction to speak of.

Black or White wears its emotions a little too plainly at times, but Costner has mainly been jettisoned because (I know this sounds simplistic but trust me) the film has been thrown under the bus by the politically correct left. This is because Binder’s script doesn’t slavishly follow the “sensitive” liberal line about the black-white chasm and the stereotypes that cling to that, and so kneejerk lefties and their industry brethren have deep-sixed the film and Costner with it.

Cue the politically correct, New York-centric ultra-liberals who’ve suggested I was a racist for saying Mike Brown was a sociopathic thug and that the wisest thing to do when being questioned or admonished by a cop is to mildly submit. The former basketball star clearly needs to rethink things as he’s obviously become a self-hating lackey of racist ruling circles.