“If Sony is worried about theaters being targeted, why not release The Interview day and date on demand?” — suggested a few minutes ago by Bill McCuddy, a regular panelist on NY1’s “Taking Pictures on Demand.” McCuddy is obviously invested in this idea to some degree, but it does make sense in this situation. If Sony suddenly announces a day-and-date VOD premiere of The Interview on 12.25, they’ll probably do fairly well. They might do very well. Presto, no bogus terror concerns!

Deadline‘s Jen Yamato is reporting that Sony has more or less folded in the face of a blustery, probably full-of-shit threat from the Sony hackers who have warned of 9/11-style attacks upon theatres that play Seth Rogen and Evan Goldberg‘s The Interview. “Sony isn’t yet cancelling the Christmas release of The Interview,” Yamato wrote, “but the embattled studio has given its blessing to concerned theater owners who choose to drop the controversial comedy.”

A Sony source has told Yamato that “we’re leaving it up to the discretion of the theater owners and chains, and we will support their decision.” Variety‘s Dave McNary is reporting that Carmike Cinemas had decided not to show The Interview in their theaters. 8:55 pm update: The Arclight Cinema chain has also bailed.

Some chains or theatres may choose to play The Interview all the same but others, I suspect, may follow Carmike’s lead.

I realized earlier this afternoon after speaking to a couple of publicists about the threat that fear had quickly taken hold. Would that Americans are made of sterner stuff. But even if only a fraction of U.S. theaters decide not to show The Interview, the bottom line is that a major corporation has blinked and basically surrendered by saying, in effect, “Okay, maybe we shouldn’t do this but we don’t feel tough enough…maybe the bad guys are tougher than we figured…so they win.”

This decision will make a big impression, trust me, on hackers the world over. A light bulb is turning on in thousands of hacker brains right now. Is there anyone who doubts that Sony’s surrender has established a precedent that will encourage other bad guys to go to town? 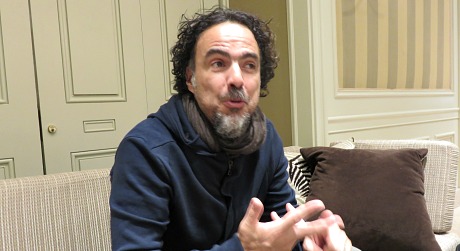 Variety‘s Scott Foundas beat me to the punch in posting about the parallel between Michael Mann‘s Blackhat (Universal, 1.16) and James Bridges‘ The China Syndrome (’79). Both films achieved notoriety because real-life events, occurring within days of their release, spiked public interest. The Bridges film, a thriller about a meltdown at a California nuclear power plant, benefitted from the notorious Three Mile Island meltdown happening less than two weeks after the film opened. Blackhat, a cyber thriller about hackers and counter-hackers opening on 12.25, will probably get a boost from interest in the ongoing Sony hack.

The difference is that after today’s almost certainly bogus threat of attacks upon theaters playing The Interview, Nervous Nellies are probably going to stay home or perhaps even avoid the megaplexes altogether. Fear is illogical. Once it sinks in it’s very difficult to turn it off. An MSNBC interviewer led off a chat today with L.A. Times reporter Joe Bel Bruno by asking “is Sony going to pull this movie?” It would be shameful if Sony does this, of course.

During his recently-popped interview with ABC’s George Stephanopoulos, The Interview star, co-director and co-producer Seth Rogen delivered the following about the level of humor that tends to be popular at the megaplex: “Although the public clearly has an appetite for garbage, how much of that garbage should you provide them with? And how much should you try to insert something that is a little bit above garbage in your garbage?”

The following paragraph concludes my 12.13 Interview review: “[The Interview] is basically saying to the guys it was made to please that they really are ball-scratching apes. It’s basically a huge insult greeting card, this film. Rogen’s film is saying, ‘You get that we made this film for you guys, right? And that we emphasized what we emphasized because we think you’re too stupid to be interested in anything more evolved or sophisticated? You’re cool with that, right?'”

What is the substantive difference between what Rogen said and what I wrote?

Variety‘s Brent Lang is reporting that Sony hackers out of Bangkok have released the promised “Christmas gift” of hacked files, which apparently focus on SPE CEO Michael Lynton. But their big play, which is almost certainly bullshit, has been to threaten some kind of terrorist havoc upon theaters that show The Interview, the object of North Korea’s ire. The goal, of course, is to scare American fraidy cats out into not seeing the film theatrically and therefore damaging Sony’s bottom line.

The latest message is comically ungrammatical but here it is: “We will clearly show it to you at the very time and places [that] The Interview be shown, including the premiere, how bitter [the] fate [of] those who seek fun in terror should be doomed to.” Wells insert: Haven’t the Interview premieres already happened? I was at the Los Angeles one and nobody blew anything up.

“Soon all the world will see what an awful movie Sony Pictures Entertainment has made,” the Bangkok goons have written. “The world will be full of fear. Remember the 11th of September 2001. We recommend you to keep yourself distant from the places at that time. If your house is nearby, you’d better leave.

Audiences the world over cheered when Kirk Douglas and fellow gladiators broke out of Peter Ustinov‘s gladiator school in Capua, Italy. They were heartened when Steve McQueen and dozens of other Allied soldiers escaped from that German P.O.W. camp. And every November we smile when President Obama saves a turkey from the axe. So naturally our hearts went out when a cow somehow escaped last Friday from Anderson Custom Pack in Pocatello, Idaho. And then we were appalled when the poor cow was shot to death. They shot a cow like a bad guy in a movie? And now everyone totally understands why four more cows slipped out Sunday through a suspiciously open gate. Somebody was stirred by the cop’s heartless response to Friday’s escape and decided to spread the feeling around, even if subsequent capture and death were sure to follow.