I’m staying, as noted, at the Casa Cody, which is right near downtown Palm Springs. Late this morning some drunk drove into a pole and knocked out the Time Warner wifi signal. Right after this I was asking the front-desk guy about alternate wifi sources, and during our discussion he called the place “Cassa Cody,” pronouncing the Spanish term for house — generally pronounced “casah” as in Casablanca — as rhyming with “pass” or “mass” or “crass” or “Cass Elliot” with an “a” attached. I didn’t say anything, of course…what would be the point?

The National Society of Film Critics completely dweebed out today by choosing Jean-Luc Godard‘s Goodbye To Language 3D as the best movie of 2014. They were basically saying, “This is a very weak year and we’re going to swan-dive into our own navels and do what we want…at the very least giving the top prize to a 3D Godard film that got a 72% rating on Metacritic and an 83% rating on Rotten Tomatoes and which Joe and Jane Popcorn wouldn’t see with a gun to their heads makes us feel good, and if it makes you scratch your head…too bad. Deal with it. But we can’t begin to feel any enthusiasm with the movies that the mainstreamers are championing, which are all ‘almost but no cigar’ films. At the end of the day we have to vote for a realm that we believe in.” Boyhood‘s Richard Linklater was named Best Director, Grand Budapest Hotel‘s Wes Anderson won for Best Screenplay nod, Mr. Turner‘s Timothy Spall won Best Actor for grunting, wheezing, murmuring and coughing, Marion Cotillard won Best Actress for her performances in The Immigrant and Two Days, One Night — that James Gray cabal won’t take no, will they? Whiplash‘s J.K. Simmons won the Best Supporting Actor prize, Patricia Arquette won Best Supporting Actress award for her work in Boyhood, and Citizenfour won the Best Nonfiction Film prize.

Some time ago Quentin Tarantino equated digital photography and projection with “the death of cinema.” Two days ago Mr. Turner director Mike Leigh, in a chat with Toronto Star critic Peter Howell, called this a “ludicrous statement because apart from anything else, it’s a backward-looking statement that is irresponsible. I remember a time in the late ’70s when people said, ‘Cinema is over.’ There are young filmmakers doing all sorts of fantastic things and part of the reason that’s possible is the democratization of the medium because of a new technology, so [Tarantino’s fight] is twaddle.” I don’t hate 35mm projection, but every time it feels like downgrade. I’ve ben spoiled by perfect digital upgrades and how great older films look on my 60-inch Samsung plasma. If God said to me, “35mm is completely finished…you’ll never see another film projected in 35mm ever again,” I would say “I’m sorry but okay, not a tragedy…I can handle it.”

The Interview has, of course, been making money online and in independent theatres, but obviously under special circumstances. Is it accurate to call the nearly $4 million earned so far decent or robust or something like that? It’s certainly less than earthshaking. It’s obviously going to end up with a whole lot less than it would have made if it had gone out wide theatrically. Would I like to see other mainstream fare released theatrically and VOD concurrently? Yes…to avoid mingling with the rabble. But if you were a financier or distributor of the next big dumb comedy, would you want it going out the way The Interview did? 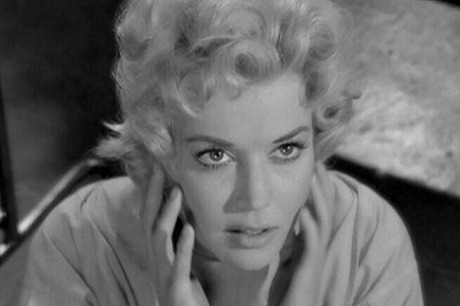 Donna Douglas as she appeared in the final minutes of the legendary Twilight Zone episode, “The Eye of the Beholder.”
January 3, 2015 12:06 pmby Jeffrey Wells
7 Comments
Kurt Vonnegut’s Ice Nine

I’m aware that complaining about temperatures in the 30s and 40s makes me sound like a real Southern California wimp, but Palm Springs feels really cold this year. And therefore I’m not feeling the festive aspects of the Palm Springs International Film Festival. Because everything is primarily about scarves and bundling up and turning up the heat. It’s like The Day The Earth Caught Fire in reverse here. Or like the Iceland Film Festival in Reykavik. Somehow desert cold gets to you much more than New York cold, and I know that sounds illogical. Whatever I do today, I’m doing it inside with a sweater — I know that much. I love the baking heat here in the spring and early summer. I love the way you can just air-dry when you climb out of the pool. During a late-summer visit 20 years ago I cracked open an egg and poured the yolk and egg white onto the pavement to see how long they would take to start sizzling. 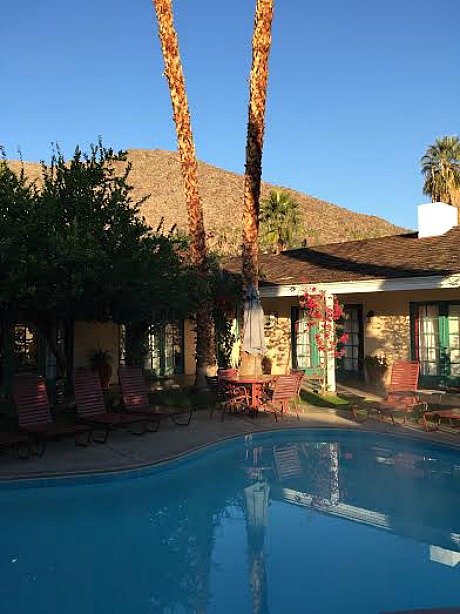 Two days ago I tried to face apparent reality but putting Boyhood ahead of Birdman and Linklater ahead of Inarritu out of a belief that I might have been wrong or obstinate, but I just couldn’t stick with it. It made me too uncomfortable. I’d much rather be loyal to movies I love and go down to the sea in ships than win some piddly Oscar pool. On top of which I had Unbroken and HE fave A Most Violent Year placed way too high. If you’re a Birdman believer then you know the value of audacity and high-reaching art and you’re at peace with that, but for many this is an incredibly soft and squishy year and nobody knows or cares about anything….they’re just floundering around and going “I dunno…I’m not sure…what do you think?” I was standing in the lobby of Hollywood’s Arclight the other night and looking at one-sheets for the all the supposed award-season hotties, and I was ticking them off one by by one…”not really…good film but doesn’t really get there…not as good as the hype…not bad but a B-minus at best,” etc. Nobody really knows or feels or believes anything with any conviction. It’s like the entire town is on sedatives. When was the last time a Best Actress contender was considered an absolute fait accompli without campaigning at all and with the movie in which she gives her award-calibre performance considered by one and all to be an absolute Lifetime stiff? Is Julianne Moore in hiding? Is she living in a cabin in the woods in northern Maine? 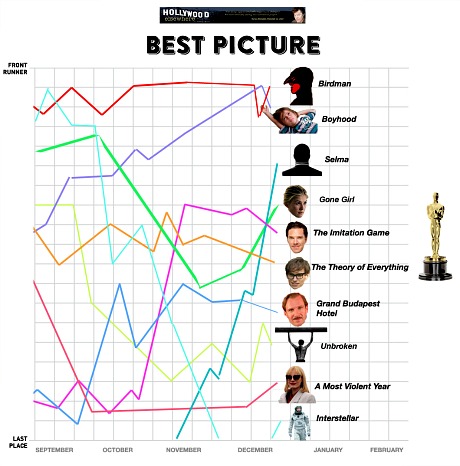 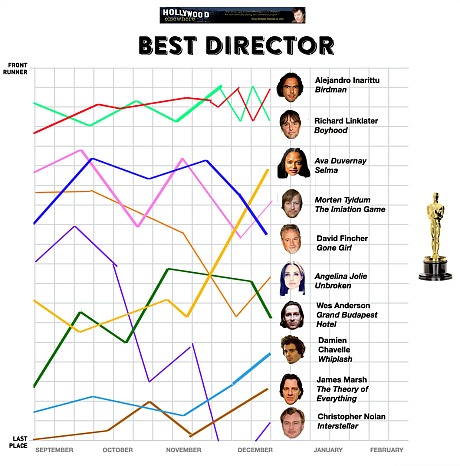 Two and a half days days ago The Washington Post‘s Karen Tumulty evaluated the accuracy of Selma‘s disparaging portrayal of President Lyndon Johnson, particularly its assertion that LBJ was initially reluctant if not hostile to supporting voting rights legislation (i.e., particularly during an argumentative meeting he had with Martin Luther King in December 1964). The film also clearly suggests that Johnson told FBI director J. Edgar Hoover to send audiotapes of MLK having it off with his motel girlfriends to wife Coretta Scott King. Tumulty’s piece, posted on 12.31, found the reluctant-to-support-legislation aspect highly disputable and the Hoover sex-tape flat-out wrong. King ally and confidante Andrew Young, in a three-way phone conversation with himself, Tumulty and Selma director Ava DuVernay, “lavished praise” on Selma but said its “depiction of the interaction between King and Johnson ‘was the only thing I would question in the movie…everything else, they got 100 percent right.’ (DuVernay declined to be interviewed on the record by Tumulty.) Tumulty also extracted an unequivocal denial from former Johnson special counsel Larry Temple about Johnson allegedly okaying the hassling of MLK with Hoover’s sex tapes. “I’m 100 percent sure that was not true,” Temple says. Another Selma fact-checking piece, posted today by Entertainment Weekly‘s Jeff Labrecque, concurs with Tumulty’s assessments in these two areas.

In a 1.2.15 follow-up article about the fact-checking “gotcha game”, Washington Post film critic Ann Hornaday (who contributed reporting to Tumulty’s piece) concludes with the following: “The correct question isn’t what Selma ‘gets wrong’ about Johnson or King or the civil rights movement, but whether we are sophisticated enough as viewers and thinkers to hold two ideas at once: that we’re not watching history, but a work of art that was inspired and animated by history. That we’re having an emotional and aesthetic experience, not a didactic one. That the literalistic critiques of historians and witnesses can co-exist — fractiously, but ultimately usefully — with the kind of inspiration, beauty and transformative power that the very best cinema such as Selma can provide.” Translation: Selma‘s slagging of LBJ isn’t such a bad thing because many of us found the film emotionally moving and that’s what counts in the end — mesmerizing art and passion transcends all. Particularly when the director is not only female but African-American, and in this context is currently making history on the awards circuit.