Last night on Real Time with Bill Maher Jay Leno told Democratic strategist Paul Begala that he’s feeling all kinds of fire and energy from Elizabeth Warren and almost none of that from Hillary Clinton. And then today chief Washington Post correspondent Dan Balz reported that when a small group of Democrats, Republicans and Independents discussed the political landscape last Thursday night in Aurora, Colorado, the only person they really liked across the board was Warren.

Balz writes that the focus group was “dismissive, sometimes harshly” in their assessments of former Florida governor Jeb Bush and was “chilly” about Clinton.

The group was basically uninterested and resistant, in short, to the idea of Bush vs. Clinton again and the general return of their dynasties.

“[But] when Warren was introduced into the conversation, however, many of those around the table, regardless of party affiliation, responded positively,” Balz reports. “To this group, who spoke in stark terms throughout the evening about the economic challenges of working Americans, Warren has struck a chord.

“Quick impressions voiced about [Warren] were highly positive: ‘Passionate.’ ‘Smart.’ ‘Sincere.’ ‘Knowledgeable.’ ‘Intelligent.’ ‘Capable.’ One person said ‘questionable.’ That was as close to a negative reaction as she got in that round.

“There were other signs that Warren, who has said repeatedly that she is not running for president in 2016, had caught the eyes and ears of people in the room. She was the popular choice as a next-door neighbor, seen as genuine and personable. Even one of the most conservative members of the group said this.

The general drift of David Ehrlich‘s 1.7 Slate article about Jennifer Aniston‘s Cake is that it’s a “terrible movie” and therefore the Best Actress conversation about Aniston is unwarranted. First of all it’s not terrible — it’s underwhelming. I know what “terrible” tends to feel and taste like and Cake doesn’t qualify. I think it’s roughly in the same realm as Still Alice, and nobody’s calling that one “terrible” so…you know, c’mon. Second of all Aniston’s performance as a wealthy, scarred-up woman dealing with constant pain delivers, I feel, roughly the same degree of conviction and finesse as Julianne Moore delivers in Still Alice. You can disagree with me and that’s fine, but I really don’t think there’s a great deal of difference. So why, boiled down, is Ehrlich beating up on Aniston? Partly because he didn’t like Cake but also — let’s be honest — because (a) he doesn’t like the general idea of Aniston being in the Best Actress conversation, probably because he regards her as a lightweight interloper plus (b) he resents the aggressively funded campaign that has put her within striking distance of a Best Actress nomination. A female performance can win a New York Film Critics Award for meritorious reasons alone but to win an Oscar you’ve got to play ball. We all realize that, don’t we? Aniston is just playing her cards according to house rules. My 11.23 opinion: “At least Aniston really gives it hell. She can be quite deft and subtle when she wants to be, always letting you know what’s happening inside with just the right amount of emphasis.”

Can you imagine the response to an opening credit sequence like this today? Can you imagine the sea of iPhone and Android screens that would start lighting up after the first minute or so? Absolutely no sound for two minutes and 43 seconds (an eternity by today’s standards) except for a single barking dog somewhere in the distance.

There isn’t a lot of wiggle room in predicting the winners of tomorrow night’s (or tomorrow afternoon’s if you’re attending a West Coast viewing party) Golden Globe awards. It’s gotta be Birdman for Best Picture, Comedy of Musical, and Michael Keaton for Best Actor, Comedy or Musical. The set-in-stone rigidity of Julianne Moore winning for Best Actress, Drama, for Still Alice…of course. Poor, sagging-against-the-ropes Selma hasn’t a chance of beating Boyhood for Best Picture, Drama. How can the Best Director award not be won by Boyhood‘s Richard Linklater or Birdman‘s Alejandro G. Inarritu? J.K. Simmons and Patricia Arquette for Best Supporting Actor and Actress…yaddah yaddah. The most welcome HFPA gesture would be to hand Birdman‘s Antonio Sanchez the Best Score award, which of course would dispute the Academy’s unfair decision to disqualify his all-percussion score because (ungracious, nickle-and-dime reasoning) the film uses a few classical music passages.

By the late spring of 1969, Gene Hackman was in a pretty good spot. He had recently delivered strong supporting performances as a tough Olympic ski coach in Downhill Racer, as an astronaut in Marooned and as a sky-diving barnstormer in The Gypsy Moths. Perhaps Hackman didn’t seem fated for stardom but he was certainly looking at steady employment as a character actor. And yet he “nearly accepted the role of Mike Brady for the upcoming TV series, The Brady Bunch,” it says in his Wiki bio, “but was advised by his agent to decline in exchange for a more promising role, which he did.” Good God…can you imagine? Correction #1: the Patton line that Hackman quoted in his 2003 Golden Globes speech actually reads as follows: “I love it…God help me, I do love it so.” Correction #2: James Cagney‘s final line in White Heat is “Made it, ma! Top of the world!

There are great movie finales, or ones that end on a sum-up note that is fair, concise, honest, eloquent. And there are finales that do all that but also reach inside and push that button that you yourself don’t know how to find, much less push, half the time. A kind of sinking-in sensation in your soul. A sense of sudden wisdom and sadness and being oddly at peace with everything, including your own miserable self. This is how I’ve felt time and again during the last 90 seconds of Franklin J. Schaffner‘s Patton (’70), and particularly upon hearing the words “all glory is fleeting.” 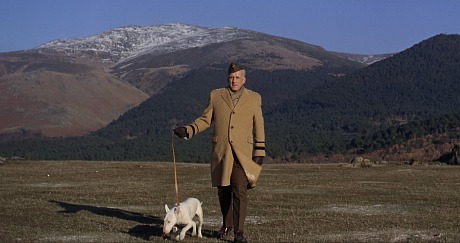 It sure as hell is along with everything else worth cherishing…romantic love, freshly-shined shoes, a perfectly tuned six-cylinder engine, purring cats on your lap, world-class wifi, general ecstasy, feelings of absolute security, exquisite guitar playing, momentary pride in a difficult achievement, warm sunshine, the balm of friendship and camaradarie, the sight of snow-capped mountain peaks against a sparkling blue sky, perfect glasses of pineapple juice, Everett Sloane‘s girl in a white dress on the Staten Island ferry…don’t get me started. All of it streaming past, leaves on a mountain stream, nothing to have or hold. Either you savor your passing delights as impermanent and all the more valuable for that, or you don’t.

Sometime during last night’s Real Time With Bill Maher they flashed a poster of While You Were Sleeping, a romantic drama costarring Bill Cosby and Sandra Bullock. Searching around for a screen-capture as we speak. If anyone’s already grabbed it, please forward. Update: The below image courtesy of HE reader “Jery October“…much obliged. 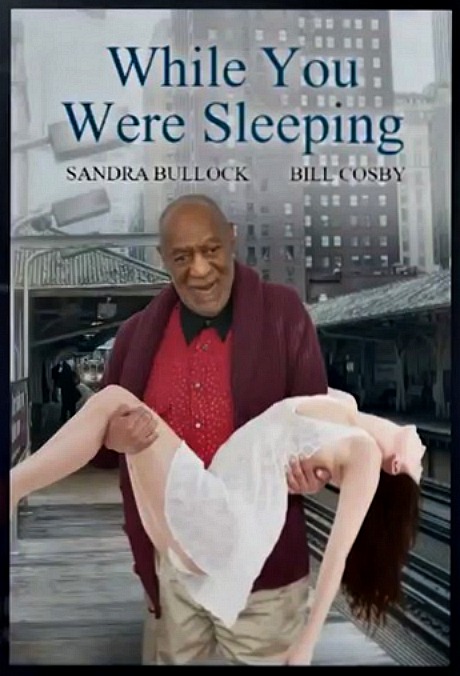