My respects to the 20th Annual Critics Choice Awards for getting a few things right that the Oscar nominations got wrong.

Instead of failing to nominate the widely-praised The LEGO Movie for Best Animated Feature, as the Academy did this morning, the Broadcast Film Critics Association stood up and gave it the big prize. Instead of ignoring Gillian Flynn‘s adaptation of her Gone Girl novel, as the Academy did this morning, the Critics Choice guys gave Flynn their Best Adapted Screenplay award. The Academy declined to nominate Steve James‘ Life Itself, an affectionate portrait of the late Roger Ebert, for Best Documentary Feature, and tonight the BFCA give it that very award. And Birdman‘s Antonio Sanchez, whose all-percussion score was churlishly disqualified by the Academy’s music branch, won the Critics Choice Award for Best Score.

And Obvious Child‘s Jenny Slate, who gave one of the most engaging, deep-down female performances of the year, won Best Actress in a Comedy. No one expected the Academy to nominate her for Best Actress — she wasn’t in the conversation, had no backing, had barely campaigned — but it was great to see her win tonight. This and more to come. 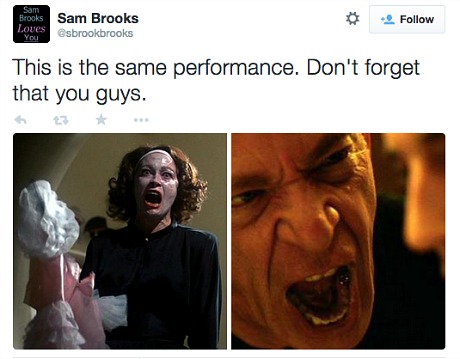 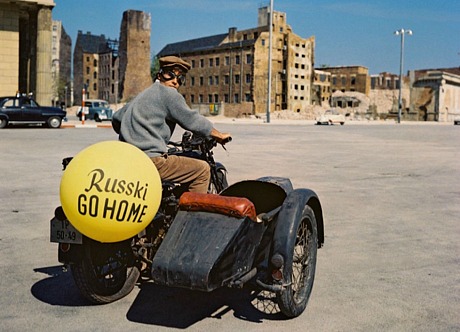 My craving for color photos of scenes or set-stills from renowned black-and-white films is undiminished. This is the only non-tinted, true-color shot I’ve ever seen from the set of Billy Wilder’s One, Two, Three (’61). 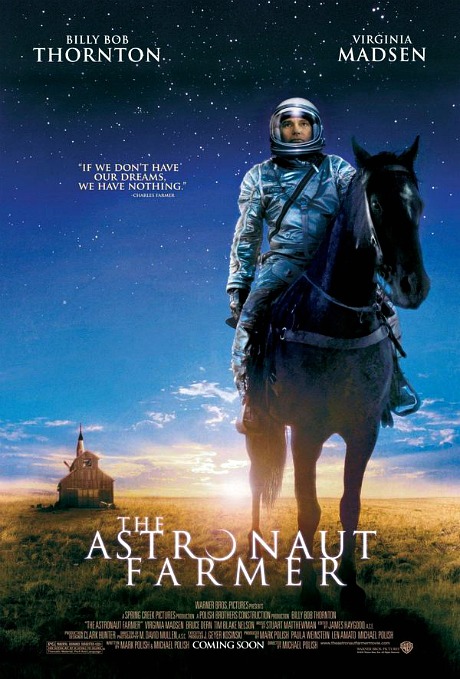 Someone declared on Twitter the other day that this is a legendary poster. It’s fairly startling. Can’t think of any reason to differ. Except I can’t even remember the story of this film, and I’m fairly sure I saw it.
(More…)
January 15, 2015 1:52 pmby Jeffrey Wells
6 Comments
Remove Cat Hair From Black Suit

I’m sorry but I’ve been up since 5 am with the Oscar noms and I feel…you know, kinda whipped. Deflated is a better term. Plus I need to start preparing for hitting the BFCA’s 20th Annual Critics Choice Movie Awards at the Hollywood Palladium. Fast nap, run three or four errands, wash the car, spiff myself up. I’m supposed to be there by 5 pm with the show starting at 6 pm Pacific. A & E is broadcasting live. The BFCA voters tend to reflect much of what the Academy likes, true, but at the same time they’re a tiny bit looser and a lot less geriatic. 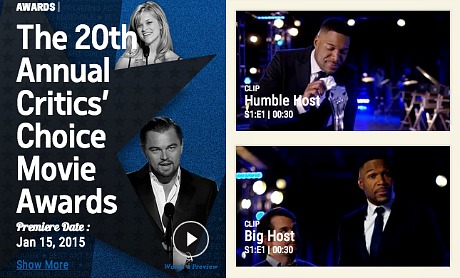 No Comments
Lads Given To Song

“A welcome return by The Red Violin director Francois Girard, this relatively by-the-numbers boarding-school drama distinguishes itself through song, thanks to the exceptional musical talents of the American Boychoir School, preteen sopranos whose otherworldly talent lasts for only a few years at most. The mystery of where that ability comes from, coupled with the urgency to share it, lends urgency to an otherwise generic coming-of-ager sure to delight those seeking spiritually grounded, emotionally uplifting entertainment. Boychoir may be soft, but it’s not run-of-the-mill TV-movie treacle, offering just enough edge to lend credibility while keeping it appropriate for all ages.” — from Peter Debruge‘s Toronto Film Festival Variety review. Dave Franco‘s cinematography is clearly first rate.

Sasha Stone is hopping mad about the Academy’s older-white-guy bias and particularly the preferential voting system, instituted in 2011, which has seemed to encourage the selecting of compassionate, positive-minded, safe-wheelhouse default films for Best Picture — films that are largely about making white guys look good, she claims. The Golden Globe Awards and Critics Choice Awards (which are happening this evening by the way) are arguably more reflective of the culture at large, she argues, while the Oscar nominations mostly reflect the tastes of an elite fraternity of old, priveleged fellows. Guys who think a certain way and who want to applaud a certain kind of uplifting film…a lament we’ve been hearing for years.

Maybe so, but I deduced a long time ago that the overwhelmingly gray-haired makeup of the Academy (an L.A. Times survey determined that only about 14% of Academy membership is under 50) means that a certain laziness and lack of stamina is coloring everything. And for this older women are just as much to blame as older men.

Last year I became friendly with a smart, sophisticated, once-happening actress who had recently served on a SAG committee of some kind. Her basic attitude about seeing films was to not see them for the first nine to ten months of the year, she once told me, and then start paying attention in late October or November. On her own she never sought out well-reviewed flicks playing at the Sundance Cinemas or the West L.A. Landmark or the Royal. She never seemed to go to the Aero to see an occasional special revival or preview of something new. She just wrote her stage plays (a pretty good playwright) and watched television and walked her dog and hung with her friends through the winter, spring, summer and early fall.

And then, when duty called in the mid to late fall, she would begin to attend screenings or watch screeners now and then. Movies were not her passion or a way of life or even a source of once-a-month diversion. She saw them over the last two or three months every year so she could remain an active voter and an honorable SAG member. But she mainly seemed to regard new films as an energy-draining chore.

This morning’s biggest Oscar Dawn surprise was the Best Actress nomination handed to Two Days, One Night‘s Marion Cottilard, which happened without any evident campaigning. Five weeks ago I posted a piece about what I was calling “the Cotillard surge,” as indicated by three then-recent critics group awards. Re-read it, Oscar handicappers, and weep: 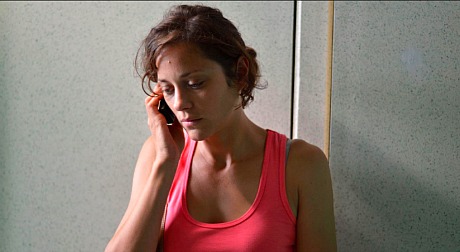 “After winning the New York Film Critics Circle award for Best Actress a week ago, Two Days, One Night‘s Marion Cotillard won the same award yesterday from the Boston Film Critics Society and the New York Film Critics Online. Today she was nominated for the same award by the Online Film Critics Society. A few hours ago I wrote some colleagues and asked why they were ignoring what I called “the Cotillard surge.” I also asked why none of the critics groups have even mentioned presumed Best Actress frontrunner Julianne Moore except the LAFCA lunch-breakers, who named her the Best Actress runner-up behind Boyhood‘s Patricia Arquette.

140 Comments
Oscar Noms Are a “Hot Mess,” or The Unexpected Virtues of “Yo, Whiplash!”

Birdman and The Grand Budapest Hotel have snagged nine nominations each. The first year in Oscar history with eight Best Picture nominations, and only four of these boast Best Director noms. Selma makes the Best Picture roster, but David Oyelowo doesn’t make the Best Actor cut and Selma helmer Ava DuVernay also denied. And Whiplash is Best Pic nominated! No Best Picture nom for Gone Girl but Rosamund Pike snags Best Actress nom. Foxcatcher is also blanked, but the film’s director, Bennett Miller is nominated, and Steve “by a nose” Carell has been nominated for Best Actor…okay, fine, figure it out.

Nightcrawler‘s Jake Gyllenhaal doesn’t make the Best Actor roster…c’mon! The James Gray cabal thrives and dominates among Academy members with Marion Cotillard nominated for Best Actress. And in so doing the hard-campaigning Jennifer Aniston has been bumped out of a nomination. That’s a big surprise. No Best Adapted Screenplay nom for Gone Girl? They didn’t even nominate The LEGO Movie in animated? And they blew off Steve James‘ Life Itself in the doc category? Troglodytes. HE’s own Leviathan and Wild Tales both nominated for Best Foreign Language film.