Support on Patreon Follow @wellshwood
5 Comments
Is it Conceivable That Joel and Ethan Could Disagree?

It was announced this evening that Joel and Ethan Coen will be co-presidents of the 68th Cannes Film Festival jury. They’ll each have their own vote, of course, but given their affinity and close creative collaborations over the decades, it makes you wonder if it’s possible that Joel and Ethan might disagree on a favorite for the Palme d’Or. The strong likelihood, I would imagine, is that they’ll be on the same page because they don’t know how to think any other way. But what if Ethan decides he likes Film A and Joel is more of a fan of Film B? Brother against brother, Cain vs. Abel, etc. The Cannes Film Festival runs from Wednesday, May 13th through Sunday, May 24th.

The final hours of Martin Luther King Day plus all the hand-wringing about Ava DuVernay‘s Selma having gotten short shrift from the Academy reminds me what a tragedy it is that Scott Rudin and Paul Greengrass‘s Memphis project, which allegedly had a brilliant script, stalled in mid-2013 and has since gone south. Memphis, I suspect, is the King project that the Academy would have really gotten hot and bothered about. And not, Sasha Stone, because of the gender or ancestry of the director, but because it might have been really damn good. I can only repeat what Greengrass told me at a Captain Phillips after-party at the Academy in early October 2013. Greengrass had cast an Atlanta-based preacher — apparently an eloquent speech-giver and sermonizer — to play King in Memphis, but the poor guy passed away during the summer of ’13. Greengrass was dispirited by this loss (he didn’t want to go into it during our chat but it was clearly a sore subject for him) and apparently lost his directorial mojo as a result. I’m also reminded of a paragraph that Deadline‘s Michael Fleming posted as part of an article about the Memphis project in November 2012: “I read the script when Greengrass tried to make the movie last time around [in April 2011], and felt it was Oscar-calibre stuff that was a powerful testament to King’s struggle and his sacrifice, even if he was portrayed as an imperfect human being. I must say it’s as good as any script I’ve read in years.” 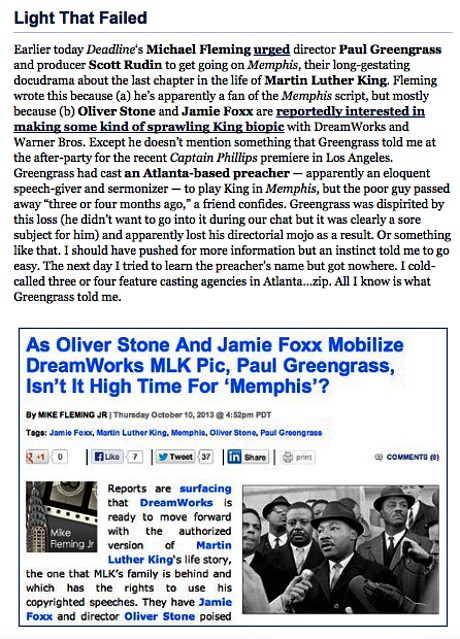 January 19, 2015 9:42 pmby Jeffrey Wells
37 Comments
This Reminds Me — Jennifer Kent’s The Babadook Should Have Been Nominated for Best Picture

Why? Because it was such a good horror film that the term “horror film” didn’t fit. It was the return of the young Roman Polanski who made Repulsion. It was one of the very few “horror films” (if we must use that term) to work in adult terms — truly sophisticated, psychologically layered and all of the spooky stuff done in-camera. I don’t care about the Gold Derby odds or the campaigning or any of that stuff. By the light of the Godz it deserved a Best Picture nomination. Period.

The Bad and The Beautiful‘s Jonathan Shields (Kirk Douglas) is routinely described as a world-class manipulator and abuser — a Hollywood shit. But every one of his bad traits is counter-balanced by positive or inspirational traits, and that’s why he’s such a great “bad guy”. Because he’s a maze of contradictions. Shields is tough, charming, imaginative, determined, and a Movie catholic who talks to the Godz. Okay, he sexually betrayed Georgia Lorrison (Lana Turner) but he also saved her from being a lush and molded her into a star. He abandoned — okay, jilted — his partner Fred Amiel (Barry Sullivan) but at the same time forced him to stand on his own and make his own career. He saved James Lee Bartlow (Dick Powell) from the endless distractions of his ditzy-brained, Southern belle wife (played by Gloria Grahame) by arranging for a Latin movie idol to take her to Acapulco. Okay, so she and the movie idol died in a plane crash. Okay, so Douglas lied to Powell about what really happened. Question is, when’s the last time you saw a bad guy in a film who also had a lot of good qualities? And about whom you couldn’t quite make up your mind?

All this time I’ve been thinking of N.Y. Times film reporter Brooks Barnes as a progressive-minded, go-getter, big-city journalist — raised in Montana, educated at Marquette, formerly with The Wall Street Journal — who subscribes to the usual liberal attitudes and coastal philosophies. And then yesterday, while tapping out a box-office story about the huge success of American Sniper, Barnes revealed himself to be some kind of secret hinterlander who regards elitist art films askance. I’ve read the following paragraph over and over, and it’s hilarious how Barnes suddenly stepped out of his dispassionate mode and said out of nowhere, “This is who I really am…fuck these elite, navel-gazing filmmakers who are out of touch with real Americans!” The key phrase, of course, is Barnes’ description of the admirers of Boyhood and Birdman as “coastal intelligentsia” who busy themselves “with chatter over little-seen art dramas”…hah!

January 19, 2015 3:18 pmby Jeffrey Wells
22 Comments
Who Led The Longest, Most Interesting and Most Willful Life? 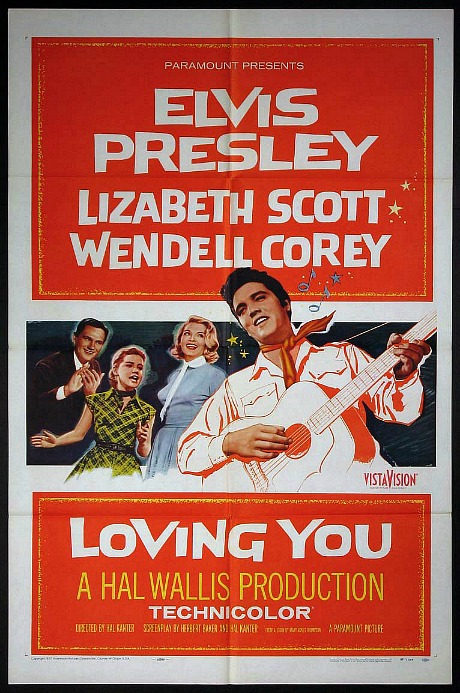 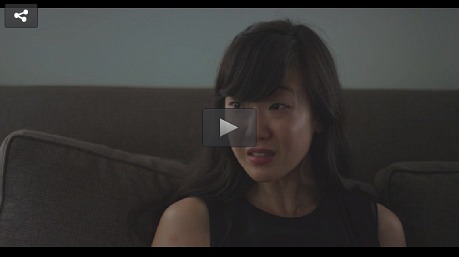 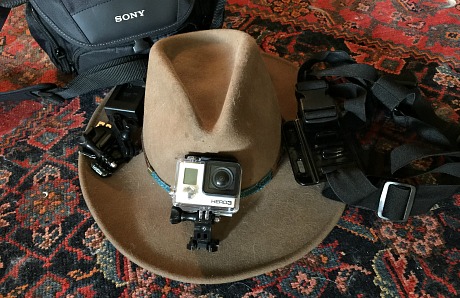 The anti-American Sniper piece that we all knew was coming was posted late Sunday afternoon by The Wrap‘s Steve Pond, and in so doing the first liberal shot across the bow of Clint Eastwood‘s hugely popular drama — a somber-minded but nonetheless conservative, generally pro-America, God-and-country war flick that has become the apple of the American hinterland — has been fired.

The idea isn’t to diminish Sniper‘s general popularity (which would be impossible at this stage) but to cut its rep down among Los Angeles and New York-centric Oscar voters. The basic thinking, apparently, is that hinterland values, which are generally thought to embrace characterizations of Middle Eastern heathens as insect-level life forms and a belief that they deserve to be exterminated en masse, have no business influencing a basically benign, liberal-minded, hooray-for-Hollywood event like the Oscars.

Pond’s piece, which will almost certainly be followed by others in a similar vein, contends that a moral argument against the late Chris Kyle, played by Bradley Cooper in the film, is gaining traction among Hollywood types. The basic beef is about Kyle having declared in his partly self-authored book that enemy combatants he fought against during the Iraq War are “savages and despicably evil” and that his “only regret is that I didn’t kill more.”