My favorite shot is of the Pterodactyl-type beast swooping down and grabbing a male tourist with his claws and carrying him aloft. I just wish the victim could have been a red-haired obese kid or a bent-over grandmother type. Or a fat guy in a wheelchair. To quote Michael Moriarty‘s character in Larry Cohen‘s Q — The Winged Serpent (’82), “Eat ’em, eat ’em, eat ’em!”

Nothing in this red-band trailer for Unfinished Business (20th Century Fox, 3.6.15) is even remotely amusing, much less “funny.” Why would a couple of seasoned (i.e., desperate) businessmen take a village-idiot type on a business trip to Berlin unless he they had decided he could probably help out? The obvious idea is to appeal to knuckle-draggers. Canadian director Ken Scott popped through with Starbuck, and then bonded with Vaughn when they made Delivery Man, the DreamWorks-financed Starbuck remake. Vince Vaughn, Tom Wilkinson as the older terrified guys, and Dave Franco as the monkey. Costarring Sienna Miller, June Diane Raphael, Ella Anderson, James Marsden.

I don’t know why I didn’t mention the Mark Wahlberg factor in my most recent post about director J.C. Chandor departing Deepwater Horizon and Peter Berg taking over, but after thinking it over (and getting a call from a friend) I’m thiking it was probably a central factor. The bottom line is that the generally muted response to A Most Violent Year probably convinced Lionsgate that they wanted a less character-driven, less political, more Paul Greengrass-y approach to the material, but I’m also convinced that Wahlberg indicated to Lionsgate that he was okay with Chandor getting deep-sixed. As a friend puts it, Chandor’s departure was probably “about Mark not connecting with J.C. on some level. Put it this way — if J.C. was Mark’s guy, if they had connected, Chandor would still be on the film. It hit me when Lionsgate immediately replaced Chandor with Peter Berg, who of course directed Wahlberg on Lone Survivor and got along with him pretty well. Maybe Wahlberg disagreed with where Chandor wanted to take the film. Or maybe Mark saw the Redford thing [i.e., All Is Lost] and liked it, and then saw A Most Violent Year and didn’t like it. Who knows? But you know that when push came to shove Wahlberg almost certainly said ‘call Berg’ to Lionsgate execs, because you know that Berg is going to do what Mark wants to do. This is about Mark Wahlberg having a say-so.”

My respect and admiration for Amy Adams is considerable, but I can’t see her inhabiting the deep-down aspects of Janis Joplin in the forthcoming Jean-Marc Vallee-directed biopic. Adams has been excellent at conveying quiet fortitude, determination and resolve (Margaret Keane in Big Eyes, con artist in American Hustle, wife of Phillip Seymour Hoffman in The Master, concerned nun in Doubt). But Joplin was about a combination of delicate vulnerabilty and scrappy, blues-wailing, whisky-drinking sass, and I just can’t imagine Adams really diving into that. Her speaking voice lacks that raspy, cackly-laugh quality, and she has a generally demure Southern-belle vibe that argues with the way Joplin behaved on-stage — that spunky but hurting soul-woman thing. I only know that when I heard Adams had been firmly cast as Joplin, a voice inside me said “really?” 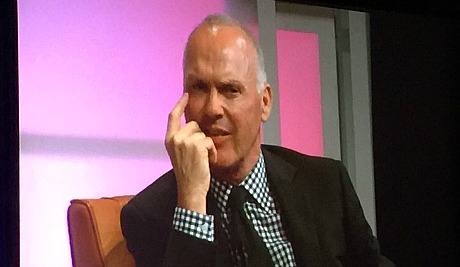 13 Comments
Only Now Can It Be Fully Acknowledged: The 2013 Oscar Telecast Was Mostly Terrible

The 2015 Oscar telecast happens three weeks from today. If producers Craig Zadan and Neil Meron are smart, they’ll try to make it play as well as last year’s show (which wasn’t too bad) and avoid the general awfulness of the 2013 Oscar telecast. That show was summed up by…well, you tell me. For some, I’m sure, it was Seth McFarlane‘s singing “We Saw Your Boobs.” Or the generally slick, shmaltzy, out-of-time Las Vegas vibe. For others it was the borderline absurd decision to hand Quentin Tarantino the Best Original Screenplay Oscar for Django Unchained (and in so doing ignore Mark Boal‘s infinitely superior Zero Dark Thirty screenplay). Or the show reminding everyone what a great film Chicago was. But for me it was the decision to have the hummingbird-sized Kristin Chenoweth (4’11”) do red-carpet interviews, and in so doing make 90% of the women she spoke to look like seven-foot-tall, 285-pound Amazons. How clueless did Zadan and Meron have to be to not realize this would happen?

A little less than five months ago, or more precisely between 9.8 and 9.13, I was in a levitational state over Paul Dano‘s performance as the young Brian Wilson in Bill Pohlad‘s Love & Mercy. I was certain I’d seen one of the best lead-actor performances of 2014 — hands down, no question — and was savoring the rough and tumble of an award-season campaign. I knew Dano could never win, but he had to at least be nominated, I was telling myself. He was too good, too “miraculous” (in the view of BBC.com’s Owen Gleiberman) to be shunted aside. And then it all came crashing down when I learned that Roadside Attractions had decided to open Love & Mercy in 2015, and not even give it a one-week qualifying run to attract year-end accolades. Pohlad reiterated during a phoner that discussions about the release strategy were “ongoing” but they weren’t — Roadside had decided on a release date of 6.5.15. 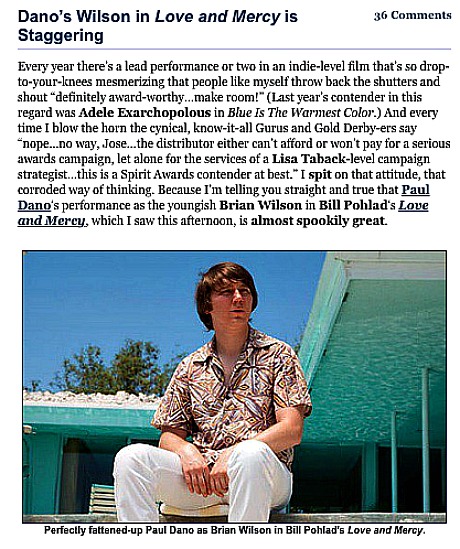 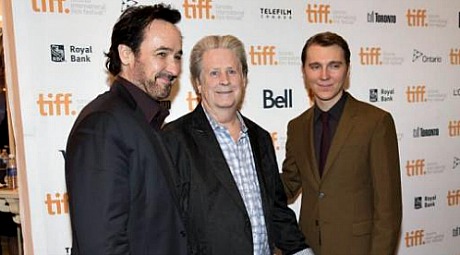