“In Cloud Atlas, the Wachowskis wildly overreached while tackling the notion of reincarnation via a daring, genre-spanning nonlinear narrative that challenged the very limits of conventional storytelling. Now, with Jupiter Ascending, the subject arises once again, albeit in the most banal, been-there-done-that way imaginable: as a garish, Phantom Menace-esque space opera in which a lowly Russian cleaning lady (Mila Kunis) is born with DNA identical to that of the most powerful woman in the universe. The movie refers to this statistical improbability as a ‘recurrence,’ which could also describe the painfully familiar feeling we get from watching the Wachowskis fail once again, this time on an unrecoverable $175 million budget. After this debacle, it will be a long time before the kind of recurrence where anyone trusts the duo with a budget anywhere near this scale again.” — from Peter Debruge‘s 2.2 Variety review.

Cameron Crowe‘s Hawaii-based romcom, frequently referred to within the archives of Hollywood Elsewhere as Son of Deep Tiki in lieu of having an official title, has finally been given a title — Aloha (Columbia, 5.29). My first reaction was that it has a resigned, downish sound as “Aloha” tends to mean goodbye more than hello. (It’s defined in Billy Wilder‘s One, Two, Three as “Hawaiian for ‘get lost.'”) So right away you’re assuming it’s a love story with a melancholy vibe. It sounds less calamitous to be called Aloha rather than Untitled Cameron Crowe Project, but I honestly prefer Son of Deep Tiki. At least that has something that makes you go “hmmm…fuck is that about?” At least it triggers a little curiosity while Aloha just sounds like some guy about to get on a plane and saying to himself “okay…fuck it, I’m gone.”

This is one of the most intelligent, engrossing, chapter-by-chapter “making of” docs I’ve ever seen. Absolutely necessary viewing if you love Rosemary’s Baby. It’s included in the Criterion Bluray of Rosemary’s Baby, which came out in October 2012.

45 Comments
When A Private Matter Is Okay For Discussion

One of my last Sundance viewings was I’ll See You In My Dreams, a mild-mannered septuagenarian love-affair drama with Blythe Danner and Sam Elliott. We’ve all accepted the everything-older-is-younger theology (i.e., 70 is the new 60) and so it doesn’t exactly feel like a head-turner when Danner’s Carol Peterson, a widower somewhere around 70, hooks up with the same-aged Bill (Elliott), a mellow, white-haired dude who owns a boat. The only unusual and frankly unbelievable aspect is hearing that the slim, good-looking Peterson hasn’t been intimate with anyone for 20 years, which is when her husband passed. 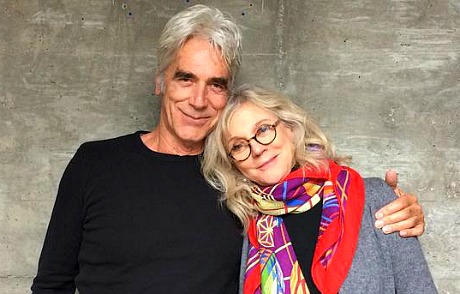 Everyone understands mourning and recovery, but pretty ladies in their 50s don’t become nuns because their husbands have died. Sooner or later they get back into it because sex is the nectar of life and the grand metaphor of appetite and engagement. Not schtupping means quitting on some level. It means you’re “too old”, and who wants to live a life that doesn’t include that intrigue? Not having sex is in the same boat as not enjoying good food, not hiking, not bike-riding, not petting your dog, not campaigning for a cause or a candidate, not laughing, not going to parties, not cooking, not visiting Italy, etc. It’s anti-life. Especially if you’re still slim and fetching, as Danner/Peterson clearly is.

Which is why it seems rather…well, surprising or curious that Danner has told Indiewire‘s Anne Thompson in a just-published interview that she was a little nervous about kissing Elliott because she’s out of practice. She says, in fact, that “I haven’t had a real kiss in 13 years,” or since her husband, Bruce Paltrow, passed on.

Scott Walker is the new Rick Perry — an under-prepared, shoot-from-the-hip, corporate-fellating rightwing loon. Mike Huckabee is an old, bloated, out-of-touch hinterland yokel. Jeb Bush is a moderate, practical-minded conservative but no way will the country stand for a third Bush in the White House. Ted Cruz is a mischief-making sociopath. Rick Santorum is yesterday’s news. Ben Carson is a distant outlier — the conservative neurosurgeon candidate. Which leaves Rand Paul as the only somewhat tolerable guy in the pack. He won’t win, but at least he warrants respect in some quarters. 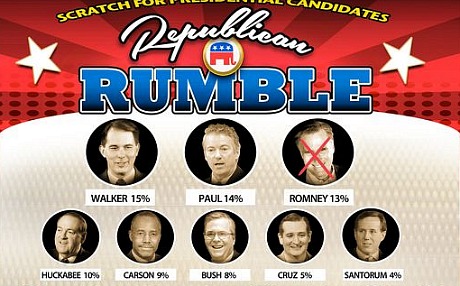 A sage but familiar observation was repeated during last night’s Virtuosos panel at the Santa Barbara Film Festival. Selma star David Oyelowo was asked by Fandango’s Dave Karger about his reactions when both he and director Ava DuVernay failed to snag nominations for Best Actor and Best Director, which many felt were due. The fact is that 2014 was a brutally competitive year in the Best Actor category, and the bottom line is that Oyelowo, who delivered a forceful and impassioned performance as Dr. Martin Luther King, was (a) simply out-flanked by the four locks (Birdman‘s Michael Leaton, Theory‘s Eddie Redmayne, American Sniper‘s Bradley Cooper, The Imitation Game‘s Benedict Cumberbatch) and (b) failed to elbow aside the weak wildebeest in the pack, Foxcatcher‘s Steve Carell, apparently because Carell’s prosthetic nose trumped Oyelowo’s oratorical panache. And also because of the hoo-hah that broke out in December when it became clear that DuVernay had mischaracterized the actions and initiatives of President Lyndon B. Johnson during the months leading to the passage of the 1965 Voting Rights Act.

But Oyelowo ignored all that and instead repeated a generic observation from the Hollywood Racism rulebook, which is that until recently the Academy has been more supportive of black performers who play kindly, acquiescent, put-upon characters rather than ones who’ve played forceful leaders and steely, stand-alone guys who don’t back off, like Denzel Washington‘s revolutionary in Spike Lee‘s Malcom X or Sidney Poitier‘s tough, principled detective in Norman Jewison‘s In The Heat of the Night. And yet among all of Morgan Freeman‘s Oscar nominated performances, his first was for playing the distinctly malevolent, non-kindly “Fast Black” in Street Smart (’87)