About two thirds of the way through From Here To Eternity (’53), Burt Lancaster‘s Sgt. Warden says to Montgomery Clift‘s Private Prewitt, “I hear you’ve gone dippy over some dame down at the New Congress Club.” Well, Oscar season is about 85% or 90% finished with about two and a half weeks to go, and I’ve gone dippy with all the interview opportunities and articles about who might win and all the rest of the razmatazz. Everyone who lives off the award-season racket (myself included) is hammering away…bang, bang, bang, bang, bang. I was going really dippy last night during the two-and-a-half-hour Directors Panel at the Santa Barbara Film Festival. Hollywood Reporter award-season columnist Scott Feinberg did an excellent job of moderating but it just went on and on and on and on and on…I was playing it cool and professional in my front-row seat but I felt like I was drowning in quicksand. During Feinberg’s chat with Boyhood‘s Richard Linklater I noticed that the Austin-based filmmaker was blinking his eyes and steeling himself and looking at Feinberg as if to say, “You’re not going to quit, are you? You’re just going to keep coming, keep digging into my soul.”

And then Linklater suddenly became Alec Guinness in The Bridge on the River Kwai, damp and pale-faced and weak but determined not to collapse, as he sat in Sessue Hayakawa‘s bamboo residence. “You will not break me,” Linklater was saying silently to Feinberg, wearing an expression of what can only be described as profound determination mixed with spirit-sapping fatigue. He seemed even more existentially depleted than myself, and I’m starting to really tire of this shit. My heart went out to him. Feinberg took a sip of Sake, narrowed his eyes and said, “And so Colonel, I have decided that your officers will not have to do manual labor.” Linklater stiffened, stood up and walked out to the center of the stage. Foxcatcher‘s Bennett Miller, standing at stage right, widened his eyes and whispered to fellow directors Morten Tyldum (Imitation Game), Laura Poitras (Citizenfour) and Damian Chazelle (Whiplash), “He’s done it!” They all ran out and cheered and picked up Linklater and carried him off-stage on their shoulders. I have to say that Miller exuded the coolest vibe of all the directors. He had a throughly non-anxious, completely Zen attitude about this charade. Whatever was said or asked or joked about, Miller was serenity itself. He was the Dalai Lama. 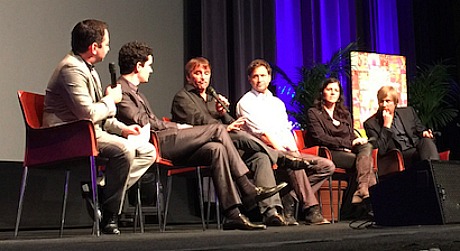 Towards the end of the 2014 Cannes Film Festival, which happened nine and a half months ago, I decided that Andrey Zvyagintsev‘s Leviathan or Damian Szifron‘s Wild Tales were easily among the two best films I had seen during that ten-day experience. Both were acquired by Sony Pictures Classics. But now, despite expectations, it’s starting to seem as if they’re not really in competition with each other for the Best Foreign Language Feature Oscar. The competition, rather, is between Wild Tales and Pawel Pawlikowksi‘s Ida (which, in my mind, is really a 2013 film). Something is telling me that Wild Tales, which has played to rousing receptions every time I’ve seen it, is going to win. It opens domestically on 2.20.

I enjoyed the company of the con artists in The Sting because…well, the story happened in fabled times (i.e., the Great Depression) and because Paul Newman, Robert Redford, Ray Walston, Harold Gould, Eileen Brennan and the other guys in the crew had that schwing and because they were looking to get revenge for the death of Luther Coleman. But I don’t like con artists as a rule, and certainly not in a 2015 context. Greedy sociopaths who create or build nothing…takers. How are they different from the serpents who are living high off the hog on the froth of today’s 1% economy? On top of which I haven’t liked Will Smith since his performance in Six Degrees of Separation (’93). He’s always struck me as aggressively hollow.

55 Comments
Darkness Falls Upon Wachowskis And All Of Their Creations

”Ready or not, Jupiter Ascending is being released, and it’s hardly the first time a studio has given reluctant birth to a theatrical feature that, in a rational universe, would never have been put in production, let alone seen the light of day. Heaping derision on such a woeful debut may be tantamount to shooting fossils in a tar pit. Yet this lumbering industrial enterprise, which was written and directed by the Wachowski siblings, Andy and Lana, is bad enough to be granted landmark status. Jupiter Ascending, in humdrum 3-D, may not be the last of its kind, but in the history of Hollywood’s decline it’s a monument to the decades-long folly of depending on grandiose visual effects to carry the day in the absence of coherent storytelling and simple humanity.” — from Joe Morgenstern‘s Wall Street Journal review.

“In a movie riddled with unintentional humor, Eddie Redmayne spurs the most uproarious laughs,” writes The Washington Post‘s Stephanie Merry. “With the exception of a goofy conversation featuring Sean Bean (‘Bees are genetically designed to recognize royalty,’ he explains with utter conviction), nearly all the awkward tittering comes at the expense of Redmayne’s portrayal of Balem Abrasax.

I’ve paid almost no attention to Sam Taylor Johnson, E.L. James and Kelly Marcel‘s Fifty Shades of Grey (Universal, 2.13), which I’ll be catching next Monday night. And I definitely don’t give a hoot about the chemistry (or lack of) between costars Jamie Dornan and Dakota Johnson. But Jezebel‘s Madeleine Davies and particularly Defamer‘s Kelly Conaboy have been paying attention, and apparently Dornan and Johnson were far from a match made in heaven. They couldn’t stand the sight or smell of each other during shooting, and apparently this attitude continued through the Fifty Shades press tour.

And what of it, right? Nobody cares if the actors can pretend well enough. Kim Basinger once said that kissing Mickey Rourke during filming of 9 1/2 Weeks was “like kissing an ash tray.” Joel McCrea reportedly despised Sullivan’s Travels costar Veronica Lake. Charlton Heston had zero chemistry with his El Cid costar Sophia Loren, particularly when he had to deal with her “pizza breath” during love scenes. Leonardo DiCaprio and Claire Danes felt little attraction or affection for each other during shooting of Romeo + Juliet. Ditto Tony Curtis vs. Marilyn Monroe while filming Some Like It Hot…”like kissing Hitler.”

NBC anchor Brian Williams is under fire and possibly in danger of being whacked by NBC News for having told a whopper about having been in a helicopter in Iraq that was shot down by ground fire 12 years ago. Yesterday Williams admitted that he had actually been in an aircraft that was following one that got hit. “The fog of memory over 12 years made me conflate the two, and I apologize,” Wlliams said on a Facebook posting.

Update: Former chief warrant officer Rich Krell, who was piloting the Chinook helicopter that Brian Williams was riding in back in 2003, says their chopper was, in fact, hit by small arms fire. “Mr. Williams was on board my aircraft [and] we took small arms fire,” Krell told CNN’s Jake Tapper. Bullets “struck the belly up in the forward cabin area and one or two other side hits, but [they] didn’t cause any major damage, just some minor damage to electronic components.” Could Krell’s comments save Williams’ ass?

Back to previously filed story: In 2.4 piece calling for Williams’ head, the Baltimore Sun‘s David Zurawik noted that “nowhere in his ‘admission’ does Williams say what he actually did: lied. Instead he says something ‘screwed up’ in his ‘mind.’ And it ’caused’ him to ‘conflate one aircraft with another.’ And this guy is the face of your news division?”

“If credibility means anything to NBC News, Brian Williams will no longer be managing editor and anchor of the evening newscast by the end of the day Friday,” Zurawik wrote.

Elvis Presley launched his legendary career in part as a symbol of rock n’ roll rebelliousness against the sexual repression and conformity of the mid-Eisenhower era. But by 1970 Presley had evolved into a conservative, largely clueless yokel hypocrite who wanted to do something to stop the scourge of non-prescription drug use (i.e, pot and hallucinogens) among the nation’s youth. On 12.21.70 Presley paid a visit to President Richard Nixon at the White House. Presley had hand-written Nixon a six-page letter requesting a visit and suggesting that he be made a “Federal Agent-at-Large” in the Bureau of Narcotics and Dangerous Drugs. Six and a half years later Presley died of prescription drug abuse and an overdose of peanut butter-and-banana sandwiches. 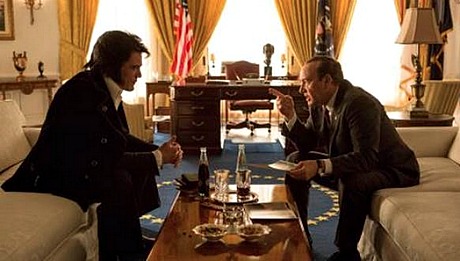 Sony Pictures management in Japan has given the shove to co-chairman Amy Pascal, apparently for the costly Sony hack scandal. Evidently Sony brass felt that a symbolic change had to happen in order to send a message that….what, studio chiefs need to be luckier? Or more cautious in approving politically-tricky comedies that wind up costing management tens of millions? One could argue that if the despotic ruler of Seth Rogen and Evan Goldberg‘s The Interview hadn’t precisely been Kim Jong-Un of North Korea, the whole mess might not have happened. Maybe. Or perhaps Sony’s Tokyo-based owners felt that Pascal should have been more guarded or measured in her emails? Or that the episode caused, in their eyes, a general loss of corporate face that could only be countered with the installing of new leadership? Something in this realm.

Amy Pascal will continue as Sony co-chairman until May.

When well-ensconced studio chiefs leave their posts they often launch a production company with an exclusive distribution deal for the studio that discharged them, and that’s what Pascal will be doing — starting a production “venture” based on the Culver City lot, with Sony distributing whatever she produces. Pascal will be well paid, stretch her creative legs, help launch a few features (presumably with a significant percentage to be made by or be about women) and so on for at least four years. Everyone will be happy.