“Doggone, you wabbit…waaaahaaaah!” Elmer Fudd was one of my first impressions. I wasn’t great at it but I wasn’t bad. I was just remembering that one of the first big laughs I got from classmates was when I recounted a chat with a 7th-grade substitute teacher, whose name was Mr. Hilse. He was Swedish- or German-looking…slim, fair-haired, medium height. He was kind of a dweeby type. Had a reedy, crackly voice and a very slight speech impediment — he had trouble with the letter “r.” Anyway the kids in Hilse’s class were all walking down the stairs one day and I decided to hop down. Hilse: “Walk like a human being and not like a rabbit.” Later that day I entertained my pallies by doing Hilse as Fudd: “…and not like a wabbit.” This was one of the most glorious moments that happened to me in seventh-grade, as I was pretty bad at paying attention or getting decent grades, and I was a complete failure with girls. I had begun to find my voice. Diminish authority figures with derision, jokes…anything that made them seem small or petty.

I will always be wary of any review by Variety‘s suspiciously dweeby Guy Lodge, but his Berlin Film Festival reaction to Anton Corbijn‘s Life, a feature about the relationship between Life photographer Dennis Stock (Robert Pattinson) and James Dean (Dane DeHaan), is somewhat encouraging. Life is “an engaging, elegiac portrait of a legend in the making,” Lodge writes, and “a loving valentine from photographer-turned-helmer Corbijn to his name-making profession.” But the most profound aspect, he says, is the “peculiarly moving, even subtly queer friendship between the two men” along with “gorgeous production values.” On top of which DeHaan, he says, delivers a “magnetic” capturing of Dean. The Hollywood Reporter‘s David Rooney disagrees. He’s calling Life a “letdown” that “doesn’t deliver on its promise,” and describing DeHaan’s performance as “more studied than inhabited.” 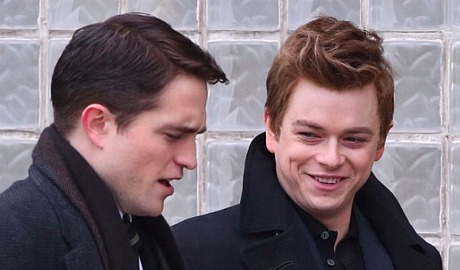 But of course, one look at the set photos tells you DeHaan is actually playing a Dean who never existed, a Chris Pratt-styled Dean who’s at least 10 pounds heavier than he was in real life. All Corbijn needed to do was say to DeHaan before filming, “Uhhm, you need to drop at least 10 pounds, man…stop drinking, hit the treadmill.” Too hard! A slightly fuller-faced Dean will have to do. 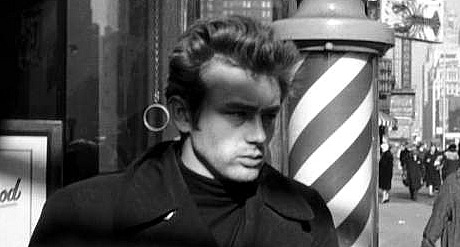 The Real McCoy on Manhattan streets in winter of 1955. 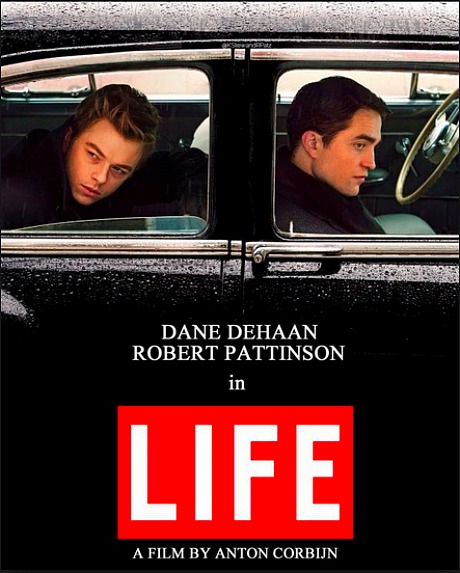 I’m gradually succumbing to the idea of buying the forthcoming Studiocanal Region 2 Bluray of John Schlesinger‘s Darling (’65), mainly because of a belief (actually a hope) that Kenneth Higgins‘ black-and-white cinematography will seem extra-vivid and super-detailed in the usual silvery shimmery way. I’ve only seen Darling on the tube, VHS and DVD, which means I’ve never really “seen” it at all. Swinging London was really happening in July 1965, when Darling opened…early LSD adventures, Rubber Soul not yet recorded, etc. It was filmed, of course, in ’64. Julie Christie‘s big break-out, quickly followed by Doctor Zhivago. Warren Beatty pounced during 1967 filming of Petulia. Schlesinger reportedly urged Christie to steer clear of Beatty, whom he described as a serial womanizer who “goes through women like a businessman through a dozen oysters.” Dirk Bogarde, Laurence Harvey, Roland Curram, Alex Scott, et. al. The Bluray pops on 3.30.15. 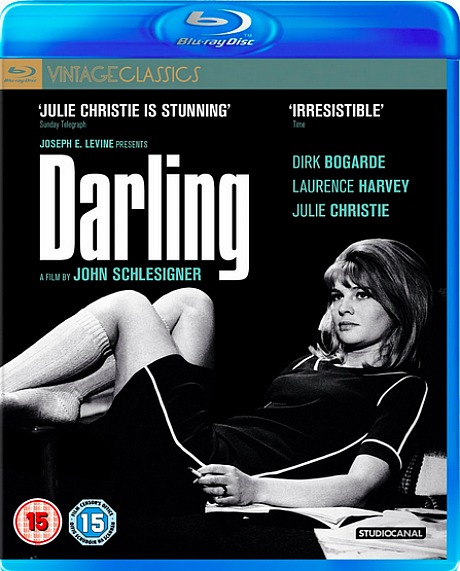 Earlier today The Independent‘s Antonia Molloy reported that Fifty Shades of Grey (Universal, 2.13), which will screen this evening at Hollywood’s Arclight, “is a bit of a slow burner.” An early review in the Sun (which you can’t read without a paid subscription) claims “there’s no sex at all for the first 40 minutes, and only 11 minutes of raunchy scenes” during the entire 125-minute film. It’s not how much sexy footage you use but the kind of sexy footage and how intense it is. How much coupling was in Last Tango in Paris? Maybe five minutes’ worth, if that. One stand-up schtupper with overcoats on, one anal-butter scene, another anal thing in the bathroom…that’s it. The Sun review reportedly says that “early scenes of the movie rely more on sensuality and tension between the couple, played by Jamie Dornan and Dakota Johnson, rather than full-on sex. [But] it makes every one of those 11 minutes count with boobs, bums and even a glimmer of Jamie’s junk.” Sam Taylor-Johnson and E.L. James‘ adaptation will have its official premiere at the Berlin Film Festival on Wednesday. L.A. reviewers has been told to hold off until Wednesday morning Pacific.

F. Gary Gray‘s Straight Outta Compton (Universal, 8.14) is about the rise and fall of the the Compton-based N.W.A. — Eazy-E, Dr. Dre, Ice Cube, MC Ren and DJ Yella. If Paul Giamatti is in it, you know it’ll be pretty good. You know who grew up in Compton? Kevin Costner. Sometime in the late ’50s through mid ’60s, when the city’s racial demographic was starting to shift. Two nights ago Costner was talking about his first sight of a big movie marquee, when he was four years old. A big biege-colored marquee with huge, bright red letters that spelled Ben-Hur. Costner was in his parents’ car in the back seat, and he learned back and saw the marquee and went “whoa.”

I’m trying to compile a list of villains who turn out to be not entirely bad at the end of a film. Bad, aggressive guys who you feel sorry for or otherwise semi-redeem themselves at the end of a film. Rutger Hauer‘s Roy in Blade Runner. Alan Ladd‘s assassin in This Gun For Hire. Tom Cruise‘s Vincent in Collateral. 10 and 1/2 years ago I described Vincent as “diamond-like — hard and sharp and full of glints and reflections,” adding that Cruise’s performance “burns through not because of some forced intensity, but an artful hold-back, cold-steel strategy. The character is a monster and a cripple, but at the same time a kind of tough-love therapist. By the end of the film he’s saved the life of Jamie Foxx as surely as if he’d taken a bullet for him. The more you think about Tom/Vincent, the more the ironies accumulate. Deftly played by a guy known for his own hard-wired intensity, this gray-suited assassin seeps through as a fairly sad figure despite Cruise barely revealing his emotional cards. Sad but oddly charitable, almost.” Who else needs to be on the list?

Leon de Aranoa‘s A Perfect Day is some kind of Balkan-set dramedy about aid workers (Tim Robbins, Benicio del Toro, Olga Kurylenko, Melanie Thierry) trying to keep a dead body from spoiling the local water supply. It played at the AFM but apparently has no U.S. distributor. So why has the trailer popped online? I’m mentioning it because with the exception of Jimmy P: Psychotherapy of a Plains Indian, I respect Del Toro’s judgment.