If I’d seen Trainwreck in Austin a few hours ago I would have probably jumped into the pool and echoed the general Twitter worship, if for no other reason than to show what a gentle, mild-mannered guy I can be when I let my alpha vibes run free. Okay, so I was hated on big-time by Schumer fans for the better part of 30 days…fine! Cooler, less invested heads will have to be heard from, of course, before Trainwreck is officially proclaimed to be a world-class comedy. But I was fairly close to delighted with Judd Apatow‘s last two directed films, Funny People and This Is 40, so here’s hoping. 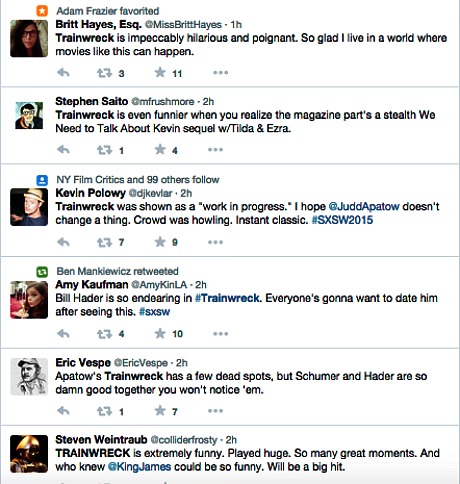 Broken Horses is a crime thriller directed, produced and co-written by Vidhu Vinod Chopra, a wealthy and successful big-wheel filmmaker who’s based in India. The odd thing about the trailer is that it includes footage of the influential James Cameron praising Broken Horses to the heavens. A similar glowing quote from Cameron as well as one from Alfonso Cuaron are posted atop Chopra’s website. Broken Horses may indeed be an exceptional knockout, but it hasn’t played at any festivals, and it was shot over two years ago at a cost of $11 million, and it’s being more or less self-distributed by “Fox Star Studios,” which seems to be a Chopra-related concern of some kind.

It struck me as odd that these highly respected filmmakers would go to bat for a film no one has heard jack about, even though it costars Anton Yelchin, Chris Marquette, Vincent D’Onofrio, Thomas Jane, AMaría Valverde and Sean Patrick Flanery. I don’t know anything but here are my questions:

(1) The Wiki page says that Broken Horses began shooting on 10.29.12. Chopra presumably finished in late ’12 or early ’13, and the movie was apparently in post-production for two full years. All through ’13 and ’14. It’s a crime film, a thriller. Not a big FX film. Why does it take two years to edit a crime thriller and then wrangle a distributor and figure out the marketing and lock down a release date? A year would be more like it.

Earlier today a journalist colleague asked why I’m not currently at South by Southwest, which he’s having a great time attending and respects as a great festival, etc. My reply: “I was going to attend but I’ve developed an opinion over the last few years that while SXSW is interesting, crackling and cool, it’s not 100% vital. But I was going to attend anyway for the sake of Ondi Timoner‘s Russell Brand doc and Trainwreck and Alex Gibney‘s Steve Jobs film and one or two others, but I got angry about the expense.

By my standards the rates for a decently located Airbnb or Craig’s List room or hotel accomodation in Austin seemed stratospheric. I didn’t want to drop $1200 to $1500 for four or five days on a room of some kind plus another $700 or $800 on airfare, food, cabs and whatnot. SXSW is not worth dropping $2000 to $2300. If I could do four days for $1500 or maybe a bit less ($150 per night rentals), okay, but not $600 to $800 higher than that. Plus I really hated the lines when I was there three or four years ago. Lines, lines, lines, lines, lines and more lines. It’s as bad as Berlin in this respect. So I thought it over for two or three days and said “the hell with it.”

I’ve explained over and over that the sight of lean-bod protagonists smashing slow-mo through sugar glass and falling backwards from great heights all but guarantees that the film is the same formulaic cowpie being shovelled for the umpteenth time. And this doesn’t matter at all. Insurgent‘s 27% Rotten Tomatoes rating is redundant, but it obviously wouldn’t have been made if the Lionsgate guys weren’t convinced that the Hunger Games audience wanted two (clap), two (clap), two franchises about Millenials and GenZ types waging armed rebellion against boomers and GenXers. I get the metaphor but even if I was 23 and frustrated and up to my eyeballs in college-loan debt I wouldn’t pay to see any of these films with a gun at my back. Poor Shailene “paycheck” Woodley — solid in The Descendants and decent in The Spectacular Now and The Fault in Our Stars, but reduced to registering shock and anger and frozen-eyed glare stares in the Diver/Insur realm. 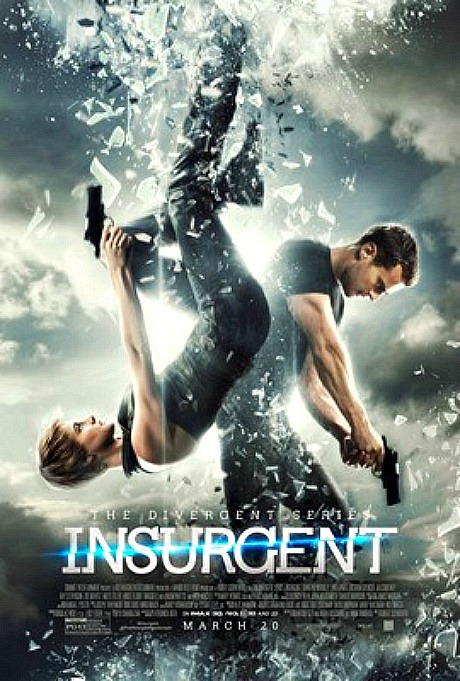 It pains me once again to see Jon Voight, a guy I used to admire in the ’70s and even into the ’90s with his performances as Howard Cosell in Ali and FDR in Pearl Harbor, unpacking his rightie loon robe again by claiming President Obama is looking to weaken Israel, that the U.S. “has never been the same” since Obama’s election, and that negotiating with Iran over its nuclear agenda is like Neville Chamberlain negotiating with Adolf Hitler. Voight apparently supports Israeli prime minister Bibi Netanyahu and the 47 Republicans who sent that mutinous letter to Iran’s leadership, and believes that…what, threatening to bomb Iran is the way to play it? “Deal-making is not a solution to what Israel faces,” Voight says, and yet he quotes Yitzhak “Bougie” Herzog, Netanyahu’s opponent in the upcoming Israeli election who, according to a 3.14 anti-Netanyahu piece in The Economist, “wants talks with the Palestinians and to heal ties with Mr. Obama.”

Update: I haven’t seen the sixth and final episode of Andrew Jarecki‘s The Jinx: The Life and Deaths of Robert Durst (it won’t air until 8:00 pm Pacific) but a Deadline report states that during the episode Durst “is heard on tape admitting he ‘killed ‘em all, of course'” — an apparent reference to his long-missing wife Kathie Durst, who disappeared in 1982, as well as Durst’s longtime friend and ally Susan Berman who was found shot to death in December 2000, in addition to Morris Black, whom Durst admitting killing in a Galveston murder trial. Variety‘s Brian Lowry reports that Durst “appears to confess while talking to himself, [speaking] into an open microphone while in the bathroom, after having been confronted with damaging evidence. ‘There it is…you’re caught,’ he mutters a bit later. ‘What a disaster.'” 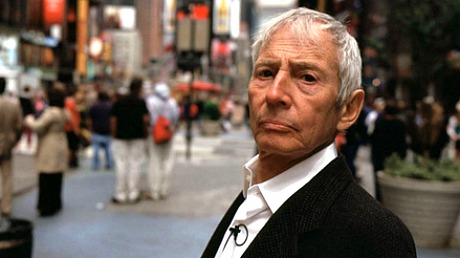 New York real-estate heir Robert Durst, long suspected of the murder of his late wife, Kathie Durst, in 1982 and now being actively prosecuted by Los Angeles authorities for the 2000 murder of Susan Berman, who was found shot in her Benedict Canyon home.

Posted earlier: If you’ve seen the five aired episodes of Andrew Jarecki‘s The Jinx: The Life and Deaths of Robert Durst, as I have, wild horses couldn’t keep you from watching tonight’s finale. Partly because the series has been quite riveting but mainly because it became apparent during last Sunday’s episode that Jarecki had obtained conclusive proof that Durst, the wealthy 71 year-old son of the late New York real estate mogul Seymour Durst and long suspected of the 1982 murder of his wife Kathie, is the author of an anonymous cryptic note sent to the Beverly Hills police department on 12.23.00, alerting them to the presence of a “CADAVER” at the Benedict Canyon home of the late Susan Berman, a friend of Durst’s who was probably killed the same day.

The “whoa!” element is not that the word Beverly was mis-spelled “BEVERLEY” on the 12.23.00 envelope, but that the same mis-spelling appears on a letter Durst sent to Berman in 1999.