How about this for a theory? Dennis Quaid freaked about being blackballed as an unemployable nutcase after yesterday’s “Dopey the dick” video went viral. His manager called the Funny or Die guys and three hours later they were on the set and shooting this “punk” video that claims it was all staged. The more I think about it, the more likely it seems.

Until an hour ago I had never once seen a color photograph taken on the set of John Huston‘s Key Largo (’48). Humphrey Bogart was 48, close to 49, and Lauren Bacall was 23. Just before the shooting, which happened in the fall of ’47, Bogart had starred in Huston’s The Treasure of the Sierra Madre, which opened in January ’48. Key Largo opened in mid-July of that year. 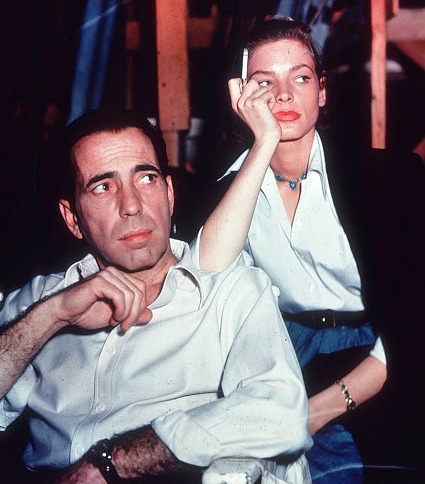 I’m into my fourth year of sobriety now (the three-year anniversary occured almost exactly a month ago) but every so often I look back and go, “Whoa…that happened in my drinking days.” Which were only occasionally wild. Except for my vodka-and-lemonade period from ’93 to ’96, which involved two alcohol-related car collisions, I never felt as if my life was all that negatively affected by drinking. Nor did I ever decide in my 20s and 30s that things had become problematic due to pot, hallucinogens, quaaludes and cocaine toots. I saw my nocturnal adventures as purely supplemental. I never partied during work hours. I saw myself as someone who worked hard, always woke up early, killed myself to become a half-decent writer, kept myself in shape and led a more-or-less disciplined life.

Yes, I behaved erratically and irresponsibly at times, but when I was younger I believed that a life without Jack Daniels and beer and quaaludes and revelry represented a kind of death. On top of which my romantic life was fairly spectacular back then so there was that besides.

One night I was at a party in Wilton with the usual assortment of drinking buddies. I started to feel tired around 1 am or so (I had to work the next day) but the guy I came with wasn’t in the mood to leave. I went outside for whatever reason and noticed that a friend who lived about a mile from my place was preparing to leave. He began to get into his ride (an LTD Ford station wagon) with his girlfriend and two other couples. I asked for a lift and he said “Uhm, I don’t think there’s any room, Jeff.” So without telling my friend (i.e., Pete) I decided to sneak a ride on top of his car, lying spread-eagled and holding on to the luggage rack. It was a moonless, pitch-black night and I somehow managed to gently crawl on top without anyone noticing. Don’t ask me.

No Comments
That’s It?

The photography is too murky, too grayish, too shadowed. You can barely see Meryl Streep. The rock through the window is the only image that sticks.

Andrew Bujalski‘s Results, which I caught at last January’s Sundance Film Festival, is a mildly diverting “indie romantic comedy” that is actually aggressively non-romantic for the simple fact that the aggressively balding, somewhat flabby, alabaster-skinned Kevin Corrigan, who is usually funny on his own louchey, street-slacker terms, plays a romantic suitor of Cobie Smulders (How I Met Your Mother). Nobody wants to see a movie in which Corrigan (who’s now 46 but looks a decade older) has sex with anyone, for any reason. The other leg of the romantic triangle is played by Guy Pearce, who’s all buffed up and handling his trainer role with a kind of dry, non-“comedic” gravitas. Results is not a “problem film” — I stayed with it, chuckled once or twice, nodded off once, woke up again. It’s a bit meandering but fine. Giovanni Ribisi, Brooklyn Decker, Anthony Michael Hall and Constance Zimmer costar.

I’ve always wanted to go inside Abbey Road Studios (3 Abbey Road, London NW8), but this Google-created virtual tour is (or was) inaccessible on my iPhone 6 Plus. So I took the tour on the Macbook Pro. It doesn’t show you the administrative offices or the walking path to Studio #1 or Studio #2. It just plops you down in Studio #1 with the narrator offering a brief history and…it all stops. Oh, I see…I have to activate the menu box and click on various blue buttons. But how do I get to the Beatles recording studio (i.e., #2)? Oh, I see…I have to resuscitate the main options and then click on 2…fine. (If Dennis Quaid was taking this tour with me, around this point he would be muttering “fucking piss shit cocksucker.”) Oh, here’s the famous old piano that was heard on “Lady Madonna” and “Martha My Dear” and sounded that legendary chord-strike on “A Day In The Life.” If I had put this together, I would have offered an optional version for the easily irritated — an old-fashioned, non-horseshitty, non-interactive version that just takes you around with a gliding Steadicam and shows you stuff…period, over and out.