A 21st Century D.C. Comics ragtag bullshit Dirty Dozen minus three. A metaphor for comic-book culture ragtag subterraneans, livin’ tough and hard by their own flinty, scruffy-as-shit, smart-assed outlaw code…rude, used, abused, sued, yahoo’ed & tattooed. “Incarcerated supervillains acting as deniable assets for the United States government, undertaking high-risk black ops missions in exchange for commuted prison sentences” blah blah. Will Smith (as Floyd Lawton/Deadshot) is all but unnoticeable for his bald head and beard and not being well lighted. The problem for me is Joel Kinnaman (Robocop, Run All Night, Child 44), who lacks natural charisma or frowns too much or something. Margot Robbie, Viola Davis, Jai Courtney, Cara Delevingne, Adewale Akinnuoye-Agbaje, Adam Beach, Jay Hernandez, Karen Fukuhara, Scott Eastwood, et. al. But not for another 15 months. Principal began on 4.13 in Toronto; Warner Bros. pic opens on 8.5.16. 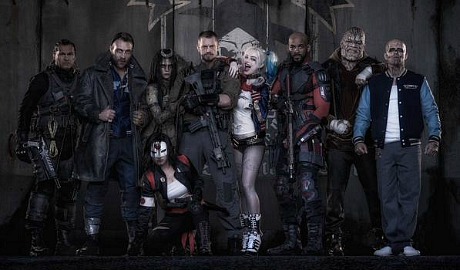 “I’ll always be a devout fan of Rodney Ascher‘s Room 237 because it’s a treasure chest of endless imaginative theorizing about Stanley Kubrick‘s The Shining. I loved the fruit-loop quality. But his latest, a documentary about sleep paralysis called The Nightmare, is almost completely devoid of imaginative riffing of any kind. The film is entirely about descriptions of creepy, real-deal encounters with “shadow men” — Freddy Krueger-like spooks who have terrorized several real-deal folks in their bedrooms (always in the wee hours) and caused them to freeze and be unable to speak and in some cases have trouble breathing. It just goes on and on like this for 90 minutes…”I was half-sleeping and then I felt something and the boogie man was behind me,” etc.

A few weeks ago I wrote that any chance of a restored, full-length version of Orson Welles‘ never-completed The Other Side of The Wind, shot in fits and starts from the early to mid ’70s, being assembled and screened in time for Welles’ 100th anniversary was out the window, and that it might be viewable later this year at best. Now even that scenario sounds doubtful. During last night’s Indiana University panel discussion about Welles’ legacy, explanations were offered about why the work hasn’t even begun. On 4.30 Wellesnet.com’s Ray Kelly reported that producer Jens Koethner Kaul had stated that Wind producers “have been stymied by distributors unwilling to finance the project without first seeing edited footage. Producers Filip Jan Rymsza, Frank Marshall and Jens Koethner Kaul need money to edit the negative, which has been stored in a Paris vault. But those with the money want to first see edited footage before committing funds.” 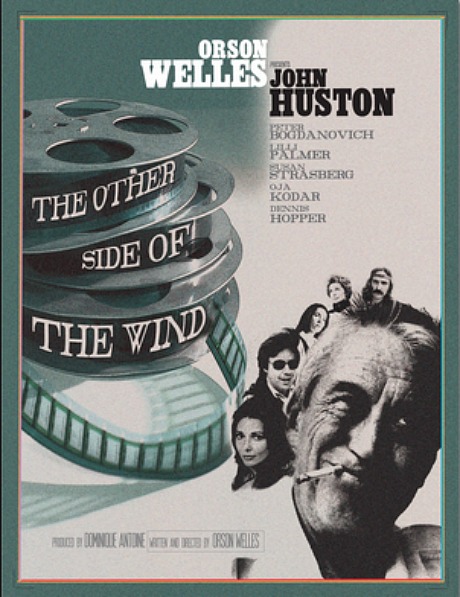 In short the same cash-starved uncertainty that has bogged down The Other Side of the Wind for decades is still alive and well. The project has become a pipe dream, and could almost be described in farcical terms. What kind of money do the editors need? Enough to cover rent, food, toiletries, fresh underwear and a handful of Paris metro tickets? Or do they “need money” in the way that Humphrey Bogart‘s Billy Dannreuther needed it? (In Beat The Devil he noted that “without money I become dull and listless and have trouble with my complexion.”) With Welles’ centennial birthday happening on Wednesday, 5.6, the Other Side balloon is all but deflated.

Hollywood Elsewhere to Steven Spielberg: You cared enough about Welles’ legacy to buy the Rosebud sled. Why not be a secret godfather and help out some? If you do the right thing HE pledges to stop all Spielberg bashing for a period of…uhm, six months?

The bottom line is that would-be distributors want assurance that the film has at least some commercial value. Will anyone other than serious Welles loyalists want to pay to see it? It’s a fair question.

I’ve been hearing all along that despite a feeling of occasional CG-ishness in some of the shots in George Miller‘s Mad Max: Fury Road, the film is very much a tour de force of practical effects. “We had to do it old-school,” said Miller during a post-screening q & a in Los Angeles on 4.29 (as quoted by Vulture‘s Kyle Buchanan). “This is not a CG movie…we don’t defy the laws of physics.” So why does some of the trailer footage seem a bit hard-drivey? Presumably because of the intensity of the color scheme, which Buchanan describes as “eye-popping” with “the teal of the desert sky and the orange of the explosions cranked up to hypersaturated heights.” Miller said that “one thing I’ve noticed is that the default position for everyone is to desaturate postapocalyptic movies. It can get really tiring watching this dull, desaturated color.” Thank you! 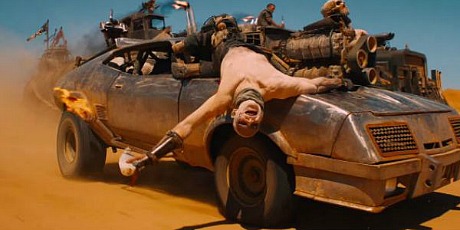