20 years ago I did a sitdown interview with Brian Wilson and then-fiance Melinda Ledbetter during the 1995 Sundance Film Festival. We were supposed to talk about Don Was‘s documentary about Wilson, I Just Wasn’t Made For These Times, which was having its big premiere up there, but we went all over. I remember telling Wilson that I always loved the reverb guitar-and-keyboard intro for ““The Little Girl I Once Once Knew,” and he quickly agreed. (That same year he told a British interviewer that “the intro is the only good part of it.”) I then told Wilson how I once tried to learn to play the intro on keyboard but I couldn’t “hear” the separate harmonized notes in my head. Wilson responded with disappointment and even a lack of patience — “You couldn’t figure that out?” That’s how geniuses are. When the stars are aligned they can swoop right in and solve any riddle, and if they’re in any kind of mood people who lack their gift can seem…I don’t know, tedious?

I’m presuming that a lot of people are going to be re-sampling Beach Boys music this weekend after seeing Love & Mercy. The default iTunes downloads will be Pet Sounds and The Smile Sessions, of course, but during last night’s cab ride from LAX I decided to buy a few songs from The Beach Boys Today!, which was recorded a little more than a year before Pet Sounds. Today! is occasionally experimental and in some ways a kind of Pet Sounds forerunner. It contains similar elements — sophisticated off-rhythms and swirling harmonies, a feeling of sadness and vulnerability in the lyrics, that symphonic white soul thing — that Wilson built upon and made into something extra with Pet Sounds. The track that knocked me out was “Kiss Me Baby.” It’s not so much a love song as a “we almost broke up last night so let’s not get that close to Armageddon again!” song. The melody is a bit on the plain and familiar side, but the lyrics are so child-like and emotionally arrested…an immature boy-lover recovering from nearly losing his mommy-lover: “Please don’t let me argue any more…I won’t make you worried like before…can’t remember what we fought about…late, late last night we said it was over,” etc. But when the chorus kicks in the harmonies and the general meltdown sound of this song are just amazing. This was Wilson’s unique realm — he made it sound just so, and with such exquisite balance and texture.

This instrumental track for “Let Him Run Wild” is also interesting for its resemblance to the instrumental Pet Sounds Sessions tracks.

You have to be a little bit concerned about Everest in one respect, which is what kind of film it’s likely to be under the commercial guidance of director Baltasar Kormakur (2 Guns, Contraband). Other than that “minor” consideration it looks great. Based on Jon Krakauer‘s “Into Thin Air” and adapted by William Nicholson (Gladiator), Mark Medoff (Children of a Lesser God) and Simon Beaufoy (Slumdog Millionaire, 127 Hours), it’s about how the moody ferocity of Everest came down on a team of climbers and then tortured and killed eight of them. Jake Gyllenhaal, Jason Clarke, Josh Brolin, Sam Worthington and John Hawkes, and costarring Keira Knightley, Robin Wright, Emily Watson and Michael Kelly. Opening on 9.18, or towards the end of the 2015 Toronto Film Festival (9.10 thru 9.20). Here‘s the international trailer.

The sound on this clip is too low to hear anything unless you’re plugged in and wearing headphones, but Amy Schumer‘s money line, delivered yesterday, is that she weighs around 160 pounds and can get laid any time she wants. No reason to doubt that. She’s done comic routines about having to lose weight before shooting began on Trainwreck, and now she’s turning around saying her more natural, somewhat heavier self is cool so whatever works. I am Bobby Seale, gagged and bound in the courtroom of Judge Julius Hoffman. Schumer has the mike and the pride attitude down pat (“I’m not going to apologize for who I am and I’m going to love the skin that I’m in”) and anybody who says anything and I mean anything different is going to get the living shit kicked out of them on Twitter….fair enough?

Most under-40s have never heard of Chuck Connors nor The Rifleman. Connors was a nice, well-liked guy who started out as an athlete (basketball, baseball) and then lucked into an acting career. He wasn’t anyone’s idea of a gifted thespian but he did well enough as Lucas McCain and in various supporting roles in the ’60s and ’70s. On the other hand Connors was close to great in one scene in William Wyler‘s The Big Country (’58), playing a cowardly lowlife who gets plugged by his own father (Burl Ives) at the finale. This is a father & son scene for the ages — anger, revulsion and contempt melting into love and ache during the last seconds of life. Connor’s sole moment of acting glory reminds me of a line from Jean Anouilh‘s Becket in which Richard Burton describes a peasant: “At 20 before he lost his teeth and took on that ageless look the common people have he may have been handsome, he may have had one night of love, one moment when he was a king and shed his fears.” This scene is also one of Burl Ives‘ best, and is probably the main reason why he won 1959’s Best Supporting Actor Oscar. 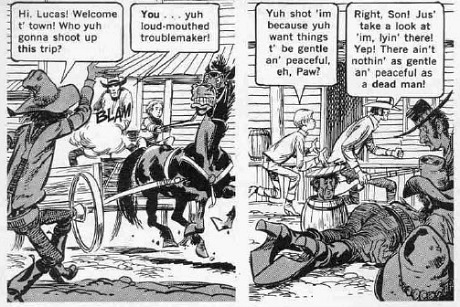 Robert Zemeckis’ The Walk (TriStar, 10.2), the scripted, line-speaking version of James Marsh‘s Man on Wire with Joseph Gordon-Levitt as Philippe Petit, will open the 53rd annual New York Film Festival on 9.25. It makes sense for a movie about a legendary New York event (i.e., Petit’s tightwire walk between the two World Trade Center towers in 1974) to debut in New York — let it go at that. But I have to acknowledge that last December’s teaser trailer worried me somewhat.

“Man on Wire for Megaplex Idiots,” posted on 12.10.14: “The opening shot of this teaser tells you everything you need to know about the Hollywood-ization of a really great story that doesn’t need any Hollywood-ization…unless you’re looking to sell it to the morons. That ascending high-speed elevator shot of the Word Trade Center’s South Tower is pure Chris Nolan, pure Batman. Ditto Joseph Gordon-Levitt walking out on a metal beam and balancing himself on one foot…showoff crap.

It’s been nearly 20 days since legendary film scholar and Orson Welles biographer F.X. Feeney posted this essay about an ambitious, insufficiently celebrated interior scene in Touch of Evil, but what’s two or three weeks in the general scheme? Feeney is drawing upon research for his recently published Orson Welles: Power, Heart & Soul (Critical Press). Nobody has more respect for Welles’ films than myself, particularly the audacity and sophistication evident in every shot and scene. But his performances have always struck me as a bit too self-regarding. Whatever the role Welles always seems to be focused on letting us know what a brilliant and erudite fellow he is/was. He never seems to look his fellow actors in the eye — at best he allows them to react to his dominance. And I still find it amazing to consider that Welles was only 42 years old when he played the obese Hank Quinlan. He looks a good 20 if not 25 years older, and what did that physical condition achieve in terms of his performance or the film? Answer: Nothing. Quinlan walks into a room and everyone is thinking the same thing — i.e., what has this guy been drinking and eating over the last few years besides bourbon, pasta and ice cream? Where does he find trousers with a big enough waist size to accommodate that gut?