I wasn’t much of a visitor but every so often I’d fall by Jan’s, an unpretentious, down-at-the-heels diner on Beverly Blvd. It closed last March. This morning I noticed that it’s been half-destroyed. Something else is being built there. I shed a little tear. I wasn’t that attached and it didn’t have a lot of architectural flavor, but I liked that Jan’s was there. They served very generous fruit bowls. Thank God that Norm’s of La Cienega, which is about two blocks west and two blocks north of where Jan’s used to be, has been saved. On 5.20.15 the Los Angeles City Council voted unanimously to designate Norms La Cienega as an Historic-Cultural Monument (HCM). Councilmember Paul Koretz has called Norm’s “a home away from home for many people” and the kind of place that “isn’t just culturally significant, but culturally uniting.” 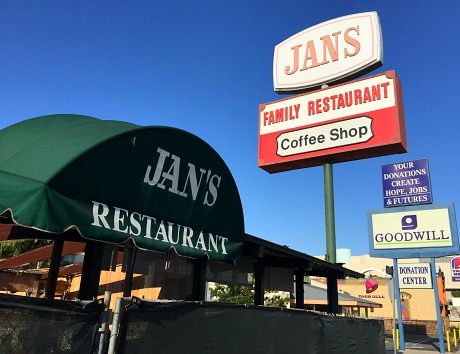 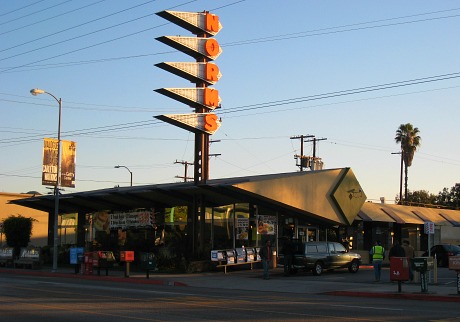 That’ll be enough in the way of tantalizing come-ons for season #2 of HBO’s True Detective (debuts on 6.21). I’m expecting a DVD screener in the mail before long and then we’ll see what’s what. The only concern is that Fast and Furious franchise helmer Justin Lin, who literally sold his soul to the devil years ago, has directed the first two episodes. Lin has always impressed me as one of the most brazenly shallow, corporate-kowtowing filmmakers working today, but maybe he managed to suppress that side of himself while shooting. Here’s hoping.

The first trailer for John Eric Dowdle‘s No Escape (Weinstein Co., 9.2.15) popped early last March, and it’s not opening for another four months. I can’t believe I’m going to be watching trailers for this exploitation flick over the entire summer. Here’s what I said on 3.6.15: “I always feel suspicion and hostility toward films in which an Average-Joe father is desperately trying to protect his family from (a) intruders, (b) kidnappers or (c) anti-American revolutionaries and terrorists. The Taken films have really poisoned this particular well. Nor do I like films about average American families having to deal with bad people in a foreign country. The underlying message is “you don’t want to venture outside the safety of your American shopping-mall lifestyle…you’re just asking for trouble if you go overseas and particularly to unstable Asian or third-world countries…stay home, go to the mall, enjoy a backyard barbecue or watch an old movie on Netflix or Vudu from the safety of your basement den.”

Jerry Seinfeld‘s comments during an ESPN interview about how politically correct agendas are stifling stand-up comedy (particularly on college campuses) feeds right into A.O. Scott‘s 6.5 N.Y. Times piece, titled “Adjusting To A World That Won’t laugh With You.” “We’re…in the midst of a humor crisis,” Scott writes. “The world is full of jokes and also of people who can’t take them. It can seem, if you dip into social media or peruse the weekly harvest of Internet think pieces, that comedy swings on a fast-moving pendulum between amusement and outrage. We love jokes that find the far edge of the permissible, but we also love to turn against the joker who violates our own closely held taboos. In the blink of an eye, social media lights up not with twinkles of collective liking but with flames of righteous mob fury. We demand fresh material, and then we demand apologies.”

Out of boredom or restlessness I’ve asked some of the Oscar whisperers to share what they’re sensing or smelling about the likeliest Best Picture contenders. But they couldn’t be roused from their early June, waiting-to-see-Jurassic World, pre-Los Angeles Film Festival slumbers. Of course it’s too early but it’s not crazy early. The programs for the Venice, Telluride, Toronto and New York Film Festivals are currently starting to take shape as we speak and will be all but firmed less than two months hence. And the publicists repping the likeliest contenders definitely know what they have or don’t have (hence the recently announced London Film Festival premiere of Suffragette and the N.Y. Film Festival debut of Robert Zemeckis‘s The Walk) so don’t tell me.

The game is on right now whether the Oscar blogaroonies want to acknowledge it or not. So here, right now, are nine films that seem to have the best credentials and tastiest aromas, and in this order. Spitballing these is nothing brilliant or even audacious– it’s just something to do on a warm June day:

* Danny Boyle‘s Steve Jobs (Universal, 10.9), which I’ve read and believe to be quite brilliant, not in spite of the dialogue-driven, stage-play feeling but oddly because of it. I won’t elaborate any further but it’s another “drilling into a prick genius” piece, revealed layer by layer via the old Aaron Sorkin rat-a-tat-tat.

* Tom Hooper‘s The Danish Girl (Focus Features, 11.27) — Flagrantly baity. Director Tom Hooper and Oscar party-circuit charmer Eddie Redmayne ride again. Everybody on the Danish Girl team will be riding the wave of the current p.c. transgender sensitivity vogue du jour (i.e., if you don’t celebrate it you’ll be hammered on Twitter as a transgender bigot), etc.

* Alejandro G. Inarritu‘s The Revenant (20th Century Fox, 12.25) — Inarritu and dp Emmanuel Lubezski are on a roll. Blast-off reactions to Chivo’s natural light cinematography at Cinemacon. It seems unlikely that Fox would open both The Revenant and Joy on Christmas day. Probable adjustments forthcoming.

* John Crowley‘s Brooklyn (Fox Searchlight, no date yet) — Across-the-board Sundance raves made this seem like the year’s first Best Picture contender. “Despite its familiar structure it’s a thing of beauty, a delicate, tender period piece about nice people trying to do their best.” — N.Y. Post‘s Kyle Smith.