London Has Fallen is a sequel to 2013’s Olympus Has Fallen. The obvious implication is that the producers behind both films (Gerard Butler, Alan Siegel, Mark Gill) are launching a Fallen franchise in which the gang can start globe-hopping and systematically arrange for wacko terrorists to destroy a new major city every couple of years. (It’s an idea, at least.) I’m more of a White House Down kind of guy because that film, whether you want to accept it or not, was a genre satire and pretty much a broad disaster comedy (at which I had a good time, laughed, clapped) while Olympus tried to deliver a semi-sincere Die Hard thing…and failed.

This morning Rope of Silicon‘s Brad Brevet posted a list of nine films he believes are the most likely to emerge as 2015 Best Picture Oscar nominees. So I decided to post a list of my own. The only Brevet nommies I disagree on are Pete Docter‘s Inside Out, which will not be Best Picture nominated because it’s animated and that’s that, and Steven Spielberg’s Bridge of Spies, which I suspect will probably turn out to be a bit stodgy and time-piecey and maybe self-enshrining (you know Spielberg). In place of these two I’m betting the Academy will want to nominate one of the five big social-political films (James Vanderbilt‘s Truth, Jay Roach‘s Trumbo, Thomas McCarthy‘s Spotlight, Oliver Stone‘s Snowden, David Gordon Green‘s Our Brand Is Crisis) and perhaps even two of these….who knows?

I’m also betting/hoping that if Universal decides to platform Joel and Ethan Coen‘s Hail Caesar! in December it might well make the cut as the script happens to be brilliant and hilarious, even though it’s one of the Coen’s goofball flicks. It also goes without saying that while general assumptions seem to be that Martin Scorsese‘s Silence will probably open in 2016, the historical drama will almost certainly be a 2015 Best Picture nominee if it opens later this year (unless it turns out to be too gruesome). I realize that Love & Mercy‘s best shot is with the Spirit Awards but I’d love to see it Oscar-nominated — I think it really deserves to be.

Rope of Silicon’s 7.1 predictions (in this order of likelihood):

I don’t watch Fallon or Kimmel all that much but I tend to keep track of each show’s highlights on Twitter (if there’s anything worth capturing or talking about the next day), and I’m not recalling much in the way of animal visits. Is there some kind of p.c. sensitivity thing these days about crassly exploiting animals or subjecting them to undue stress or something along those lines? Just wondering. I know that Carson definitely had animals on from time to time.

Glenn Kenny has written a not-yet-posted piece for Vulture that takes issue with the portrayal of the late author David Foster Wallace in James Ponsoldt‘s The End of the Tour. It won’t appear until just before the film opens on 7.31, but it’ll probably be fairly interesting as Kenny knew the late writer fairly well (as an editor as well as on purely personal terms) and considered him a pally of sorts. He told me this morning that Tour is a “really inaccurate” portrait of what Wallace was like as a person.

I replied that it can’t be that inaccurate as Donald Margulies‘ script is based on David Lipsky‘s book, “Although Of Course You End Up Becoming Yourself,” which is largely based on cassette recordings of his conservations with Wallace when he was interviewing him in ’96 (when Wallace was 34) for a Rolling Stone piece.

Kenny had strong retorts but those are on background. As noted, his piece is up later this month.

Margulies knew Ponsoldt from having taught him writing at Yale, and sent him the script directly. Margulies had no idea if he even knew who Wallace was but thought on the basis of his other films (The Spectacular Now, Smashed) that he would be perfect. It turned out Ponsolt was a Wallace devotee who had waded heavily into “Infinite Jest” at college and had read almost everything else Wallace had written. He even quoted Wallace’s “This Is Water” commencement speech at his own wedding. 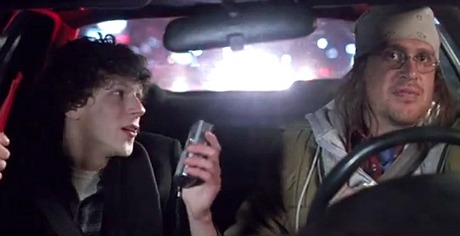 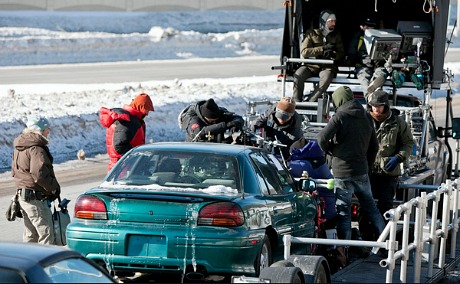 I’m sorry to say I wasn’t all that taken with James Ponsoldt‘s The End of the Tour (A24, 7.31), which I saw last night at the Aero. It’s a dialogue-driven thing with not enough going on underneath. The basic focus is the renowned David Foster Wallace (Jason Segel), author of “Infinite Jest” and other respected works, and particularly a five-day-long interview he did in ’96 with Rolling Stone correspondent David Lipsky (Jesse Eisenberg), when Foster was 34. (Wallace offed himself at age 46.) It’s largely set in Wallace’s grungy, cluttered home in rural Illinois, which seems like a horrid, barren, show-covered gulag. I’ll get into this in a subsequent post but I wouldn’t want The End of the Tour to get in the way of anyone enjoying (or listening to for the first time) Wallace’s “This Is Water” commencement address, which he delivered a decade ago at Kenyon College. Here’s the whole thing and here’s a video that conveys a portion:

25 Comments
Fassbender Will Be Fine

I was afraid there might be some kind of inability to suspend disbelief with Michael Fassbender playing Steve Jobs because he looks nothing like the guy. But he sure seems to behave like Walter Isaacson’s version of Jobs in this trailer and the film (or at least this hinting of it) seems to have its ducks in order so I’m starting to feel more relaxed. On top of which I’ve read a draft of Aaron Sorkin‘s script and it’s a strong, riveting, rat-a-tat-tat deal, let me tell you.

Again, that hacked Sony email written by Sony marketing exec Michael Pavlic about the script: “It’s brilliant. It’s perfect. There are marketing liabilities. It’s long, it’s claustrophobic, it’s talky, it could be a play, it risks being all one medium close-up, it’s periody…a mediation on Jobs himself. It’s insistent upon itself, it’s relentless. I kept begging for someone to walk outside, for some daylight, for an opening…