The question shouldn’t be “if God exists then whey did he make ugly people?” The question should be “if God exists, why didn’t he just eliminate beauty and make everyone into a schlumpy and dumpy type so that we could all be people who define ourselves by what we are inside and…you know, be able to rock out with super-feisty personalities and be extra-clever and witty and valuable in a crackling spiritual sense without being hung up on ‘looks’ or ‘beauty’ or even being all that good in bed?”

There’s nothing wrong with pixie cuts. It obviously depends on the shape of the face and how good the hairdresser is, but some women look good in them (Ellen Degeneres), some look great (Judi Dench, Jamie Lee Curtis) and some former pixie-wearers have looked better with their hair grown out a bit (i.e., Carey Mulligan, Charlize Theron). But when some older women wear them it’s like they’ve got an electric sign around their necks that says “I’ve reached that proverbial age when my hairdresser has told me I’ll look younger with a pixie, but of course I don’t — it just looks like I’m doing the same thing that hundreds of thousands of other 50-plus women with gray hair are doing.” I know that my mother wore her hair in a pixie when I was a kid and I didn’t like it then. I think there’s something profoundly unsexy about them. Tingly dream scenarios about this or that woman flash in my head when I’m out and about, but I’ve never had a single fleeting fantasy about a woman in a pixie cut…not one. When I talk to a pixie-cut woman it’s like I’m talking to Lee Marvin in The Wild One or a sanitation engineer or a meter maid. And I felt a slight current once when I was talking to Lily Tomlin at an I Heart Huckabees party so don’t tell me. I honestly believe there’s nothing less stirring than a pixie cut. I’m not saying that older women who let their hair grow out and do the old silver bohemian thing are the cat’s meow, but at least this isn’t an instant shutdown.

Yesterday I riffed on a possibility that we might be seeing a Cate Blanchett-vs.-Cate Blanchett Best Actress competition this fall. The notion was that Cate’s Oscar-touted performance in Todd Haynes‘ Carol might be matched by her portrayal of former CBS producer Mary Mapes in Truth. Well, right away HE commenter RealBadHatHarry claimed he’d seen Truth and cast doubt on the afore-mentioned scenario, in part because the film, he said, is too reflexively liberal. Then a friend called and asked who had told me that Blanchett’s Truth performance was extra special. “A non-vested marketing guy who attended a buyer’s screening two or three months ago,” I answered.  Then my friend told me “there’s no way this film will be in the award-season conversation.” Not even for Blanchett’s performance? “Her competitive pony is Carol,” he said. I asked if he’s seen Carol and he said no. Then he said the makers of Truth were “still working on it,” a phrase which sometimes means that the value of a film might be in question. Then he asked if I could think of a single critically praised film that was set in the U.S. but shot overseas. (Truth was mainly filmed in Sydney.) I was moved by the call because he was basically trying to save me from embarassment down the road. And then another friendo passed along the same buzz. So without casting any aspersions let’s modify the tone of yesterday’s article and pledge to see Truth whenever it screens (it’s conceivable that it might not go to Telluride) and see how everything shakes down on a step-by-step basis. 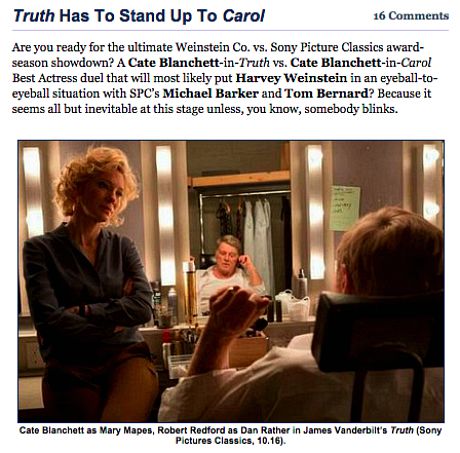 After putting up with an occasionally spotty AT&T signal for years, I’ve popped for one of those phone-signal enhancers they sell for $150 and change. At my place, I mean. The AT&T MicroCell “acts like a mini cellular tower, boosting cellular performance in your home or small business,” etc. I’ve also decided to cut ties with Time Warner and go with an AT&T cable/wifi plan that will cut my monthly down from $260 and chance to less than $100 per month. What the hell, shake things up, see what happens. 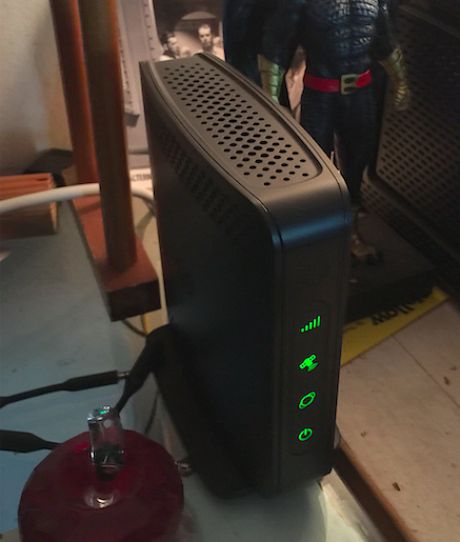 What Diane Sawyer passes along in this clip is nothing earth-shaking, but it touched me: “A criticism is just a really bad way of making a request, so why don’t you just make a request?” I’ve rarely done this because most married partners (a) tend to see such a request (i.e., “could you maybe think about modifying this or that behavioral trait?”) as an assault upon their magnificence and (b) lack the humility or the character to modify anything about themselves in the first place unless it’s alcohol-related. But you never know with people. The best thing is probably to say nothing. Just tough it out. 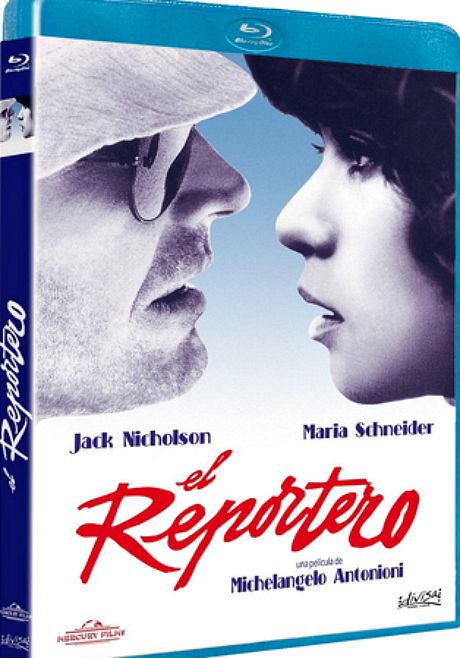