I don’t know if By The Sea is supposed to be happening in the early, mid or late ’70s, but that hotel looks a little too ostentatious for the Nixon or Carter years. Things were plainer back then, especially in small seaside villages in southern France. On top of which I’m feeling a lethargic vibe. An air of resignation. I take it Brad and Angie’s characters aren’t into, like, opening up. I would love it if they would do a Who’s Afraid of Virginia Wolff meets My Dinner With Andre or some kind of challenge to that third-act hotel room scene in Richard Linklater‘s Before Midnight, but I guess not. If you’re doing a lot of smoking and weeping alone and telling your partner to whack you harder and so on, things are pretty well poisoned. “Why can’t we talk it over? Always seems to me, sorry seems to be the hardest word.”

Everyone was gloating today about Jerry Lewis having donated The Day The Clown Cried, the World War II concentration camp tragedy that he directed but never finished and has pledged he’ll never allow to be shown, to the Library of Congress. The chuckling was over Lewis having stipulated that the film, the premise of which has been a butt of jokes for decades, can’t be screened until 2025. I don’t get the joke. Creativity is always about risking failure. Lewis wanted to make something powerful and devastating but he badly miscalculated. His sentimental streak didn’t mesh with the Holocaust. I’ve always had a perverse enjoyment of Lewis but a lot of others don’t like his brusque, caustic manner so they’re seizing upon this as a way to slap him around. The richer laughter was over Noah Bierman’s L.A. Times story having broke the news, but not until the 21st paragraph. Here’s a draft of the Clown script. 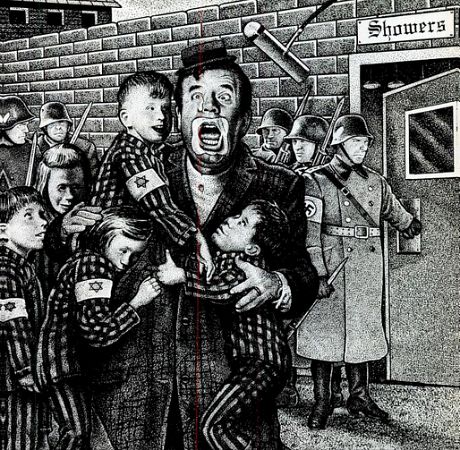 I used to chase tough stories during my reporting days with Entertainment Weekly, People and the L.A. Times Syndicate. Whenever I called about something a little scary people would lie or duck my calls or return them a week later or refer me to a spokesperson. Business as usual. But I’ve never been given the runaround — stonewalled, in fact — about the release of a small hand-to-mouth documentary, which is what happened today. The film is Colin Hanks‘ All Things Must Pass, a doc about the rise and all of Tower Records which played at SXSW last March after seven years of effort and a crowdfunding campaign that raised $92K. A 3.29 Variety story by Dave McNary reported that Gravitas Ventures had signed to distribute with a projected September release.

Encouraged by the respectful to glowing SXSW reviews, I’ve been waiting for an opportunity to see this doc for several months. Everyone loved the Tower Records experience during the boom decades. But it hit me today that if ATMP was going to pop next month (probably on VOD with a small theatrical break in a few cities, if that) an online trailer would be viewable now. And there ain’t one. So I emailed Gravitas Ventures spokesperson AJ Feuerman and asked what was happening. She referred me to a spokesperson at Sunshine Sachs. So I called and asked if the film was coming out in September. “You’re being kinda rude,” she said. “I’m just asking a direct question, which you’re kinda ducking,” I said. “Is the September opening that Variety reported about being postponed?” She said she couldn’t confirm anything except to say that Gravitas is distributing the film. She again suggested Sunshine Sachs.

All through season #1 of The Leftovers Justin Theroux was rocking a ten-day beard, which is usually an indication of hip existential lethargy or in some cases serious depression. In the second season he’s clean-shaven. The indication is that his character, a small-town cop named Kevin Garvey, feels less gloomy about the big cataclysmic disappearance. That or Theroux (who married Jennifer Aniston last night) is declaring that the beard-stubble hipster thing is definitely over. (Ten months after The Spectator‘s Harry Mount said the same thing. Was Theroux’s despairing beardo look in season #1 the final death blow?) Season #2 kicks off on 10.4.15; a season #1 Bluray package will pop two days later.

The Leftovers “is about cosmic malevolence and the utter absence of wonder,” I wrote last August. “A cosmic event of extraordinary significance has occured three years before the series begins, and in the wake of the disappearance of 2% of the world’s population, it seem as if everyone in The Leftovers is saying ‘Wow, we didn’t get chosen…that’s fucked up…this feels bad…I guess we’re all spiritually deficient on some level…shit.’

“The vacation of a famous rock star and a filmmaker is disrupted by the unexpected visit of an old friend and his daughter”…okay. And then somebody does something they shouldn’t…right? There is ample evidence that Luca Guadaginino‘s A Bigger Splash exists as a film, but I’m not sensing any organic strands, aromas, tastings. Where’s the teaser? Why is this remake of La Piscine (which I tried to watch on Amazon Prime a few months ago only to lose interest) using the title of a late ’60s David Hockney painting? Answer: Because they both use images of swimming pools but I’m not getting any kind of sparkling blue chlorine vibe from A Bigger Splash — I’m getting an exotic Mediterranean island vibe with the aroma of the sea and beach tar and fine red wine. Splash will be seen at the Venice Film Festival and will probably, I’m guessing, turn up in Toronto (and perhaps even Telluride?). The IMDB says it’ll open in England sometime in October but what about stateside? Fox Searchight acquired it last February but their theatrical plans seem enveloped by a kind of fog bank or misty haze. I’m sensing a 2016 winter-spring opening. You could explain it 100 ways from Sunday and A Bigger Splash would never mean anything to Joe Popcorn because it seems to be about lah-lah elitists succumbing to base urges (or something like that). The costars are Tilda Swinton, Dakota Johnson, Matthias Schoenaerts and Ralph Fiennes. 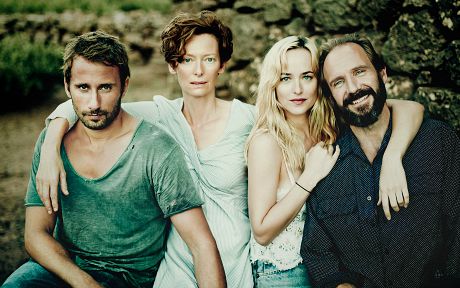 Matthias Schoenaerts, Tilda Swinton, Dakota Johnson, Ralph Fiennes in A Bigger Splash — a movie that will play in Venice in less than four weeks but which is shrouded in a kind of haze. It seems to be hiding something on some level or at least has yet to define itself in a way that adds up to some kind of recognizable psychology or geography or odor…something that hints at a certain molecular constitution.
August 6, 2015 12:20 pmby Jeffrey Wells

One, with journos of consequence leaving town for Venice, Telluride and Toronto a little more than three weeks hence, I’m presuming Universal will soon be press-screening Baltasar Kormakur‘s Everest, which will open the Venice Film Festival on Wednesday, 9.2. Two, directors are always telling actors to scream or bellow in pain whenever something violent or traumatic happens (gunshots, avalanches) but I don’t believe this — people who’ve been hurt or seriously threatened instantly devote their energy to surviving their ordeal, and if they make any kind of sound it’s usually along the lines of a mumbled “uh-oh.” And three, will Everest convey the basic mistake of the 1996 Everest climbing disaster, which is that reports of an oncoming blizzard were known but ignored by those who didn’t want to stop?