Today I attended a press/Academy lunch at Craig’s for Spotlight director Tom McCarthy, who is literally the toast of the town right now. Received last weekend from a producer pal: “I thought it was wonderful. It may be the first time I really liked Liev Schreiber — he was amazing. Keaton amazing. Ruffalo amazing. It will definitely win the ensemble cast award from the Screen Actors Guild. A major contender for Best Picture.”) Nobody except LexG is anything less than over-the-waterfall in praise for this fact-based drama, which was produced by Steve Golin, whom I ran into recently at the Middleburg Film Festival. (The other producers are Blye Faust, Nicole Rocklin and Michael Sugar.) Also in attendance: Open Road honcho Tom Ortenberg, Spotlight award-campaign consultant Lisa Taback, Jackie Bisset, Dermot Mulroney, Nic Coster. 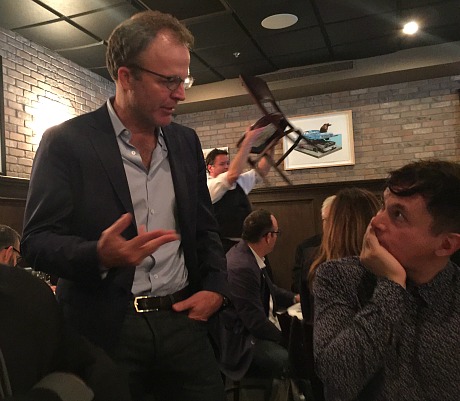 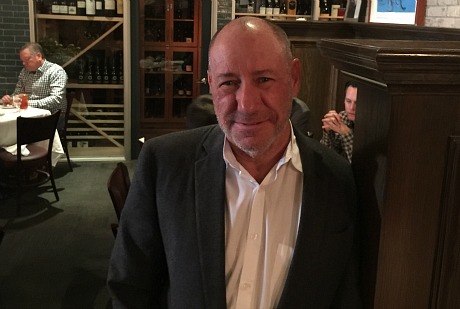 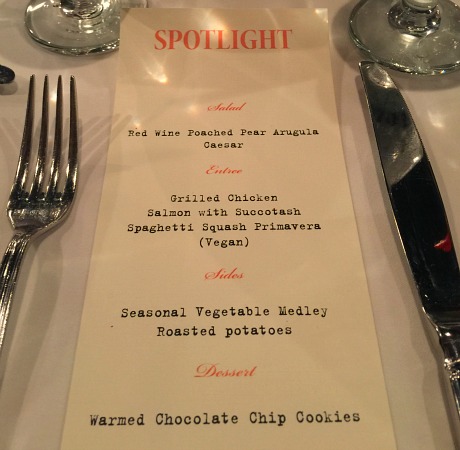 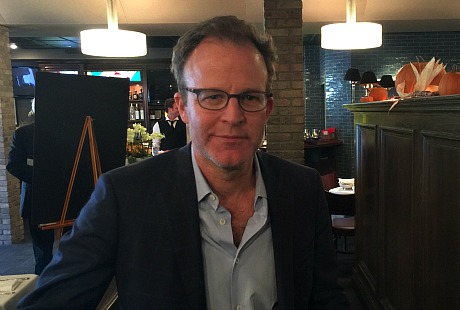 Last Friday attended a Musso & Frank luncheon for Kent Jones‘ Hitchcock/Truffaut (Cohen Media, 12.2), which is vying, naturally, for a Best Feature Documentary nomination. Which it fully deserves. Just as I fully deserve to eat free food occasionally. (Actually that analogy doesn’t work — scratch that.) Jones’ doc is as good and scholarly and reverential as films of this sort get. If you don’t know your Hitchcock, you will after seeing it.

I first saw Hitchcock/Truffaut in Paris last May, a week prior to its 5.19 Cannes Film Festival debut. I called it “a sublime turn-on — a deft educational primer about the work and life of Alfred Hitchcock and, not quite equally but appreciably, Francois Truffaut. Efficient, well-ordered, devotional.” 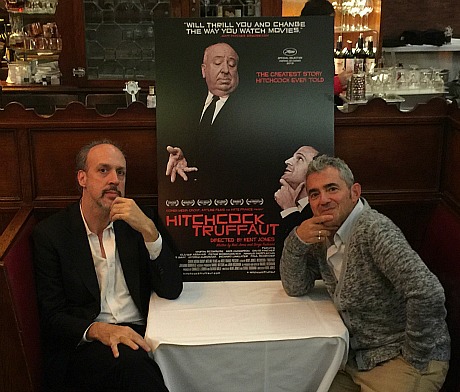 (l.) Kent Jones, director and co-writer (with Serge Toubiana) of Hitchcock/Truffaut as well as the top programming dog at the Film Society of Lincoln Center, and (r.) Cohen Media’s Daniel Battsek at Musso & Frank — Friday, 11.6, 1:40 pm.

Kent was his usual cool, erudite, laid-back self. Dressed in a Stanley Kubrick-like dark blue suit.

I asked him again about getting screen-capture images of some Psycho images of Hitch shooting the Phoenix hotel room scene (Janet Leigh, John Gavin) — images I’d never seen before. Apparently they’re under some kind of copyright lock and key or whatever. Jones had nothing to tell me about these images last May, and he still doesn’t. I’ll never see these images up-close.

Hitchcock/Truffaut “didn’t tell me anything about Hitchcock or his many films or Truffaut’s renowned ‘Hitchcock/Truffaut‘ book (a feature-length q & a interspersed with frame captures from Hitch’s films) that I didn’t already know, but that’s okay — almost every detail of the book’s material was absorbed into my system decades ago.

A Bluray of the most HE-loathed movie of 2015 arrived two or three days ago. The second I opened the package the stomach acid returned. “What’s wrong is that movies like this are deathly boring and deflating and toxic to the soul. They’re anti-fun, anti-life, anti-cinema, anti-everything except paychecks. Furious 7 is odious, obnoxious corporate napalm. It is fast, flashy, thrompy crap that dispenses so much poison it feels like a kind of plague. Wan’s film is certainly a metaphor for a kind of plague that has been afflicting action films for a good 20-plus years.” — from my 3.31.15 review. 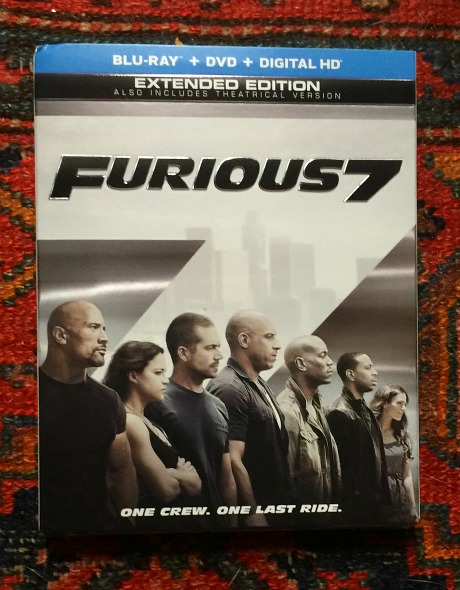 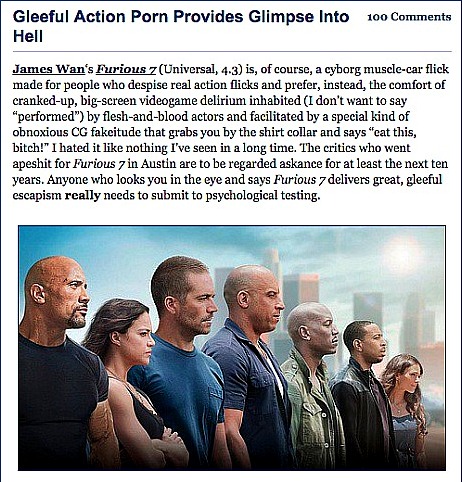 Look at what Goldfinger (’64) and Thunderball (’65) made when you adjust for inflation — $550 and $600 million domestic, which is way above the grosses of any Bond films since. From Russia With Love (’63) did better than all the Roger Moore Bonds except for The Spy Who Loved Me, and roughly as well as all the Brosnans and two out of three Craigs (Skyfall being the bang exception). But even Skyfall is dwarfed by Goldfinger/Thunderball, and is evenly matched by You Only Live Twice. Even little, new-to-the-marketplace Dr. No (’62) — the first 007 starring a relatively unknown Sean Connery — took in $150 million by 2015 standards. The lowest earners of all were the two Daltons — The Living Daylights and License to Kill. 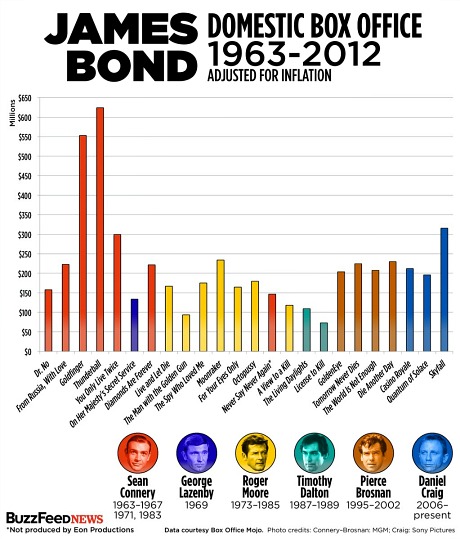 The latest Gurus of Gold multi-category chart has Steve Jobs‘ Michael Fassbender in the lead for Best Actor Oscar. Even if you put aside Fassbender’s reported reluctance to campaign, he’s certain to lose this standing before long due to the fact that (a) the movie is a commercial stiff and (b) there are things to dislike about it from a critical-aesthetic perspective, the most prominent of these being the toxic dislikability of Fassbender’s Jobs character. I liked Jobs on the page but I didn’t like him when Fassbender stepped into his shoes….sorry. Honestly? Winning is an impossibility at this stage, and Fassbender even being nominated may become an iffy thing down the road. Or maybe not. I don’t know everything. But I’m certain that the bloom is off and it’s probably all downhill from here on. 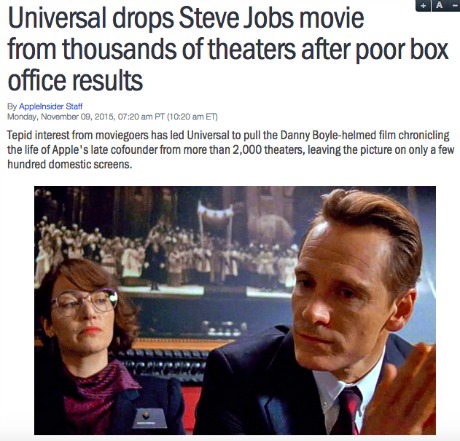 Awards Daily‘s Sasha Stone has added a spoiler warning introduction to the latest Oscar Poker, which drew scattered complaints after being posted last night due to certain revealings about Brooklyn and Room. If you’ve read a few reviews of Brooklyn you won’t be alarmed but spoiler whiners can be hyper-sensitive about this stuff. Again, the mp3. 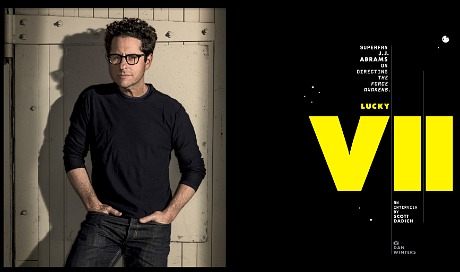 I have no respect whatsoever for another “yay Casablanca!” doc that shits all over the original 1.33 or 1.37 aspect ratio by framing the clips in 1.85. The content of the doc isn’t bad but seriously…this is a huge fail for producer-director Gary Leva. Really — what he’s done here is truly awful. And why is this doc being sent around at all? To recognize what anniversary or promote what product? Didn’t Hillary Clinton say back in ’07 or ’08 that Casablanca was her favorite film? Other studio-era films (like HE’s own Treasure of the Sierra Madre) need celebrating more.

If you’re new to Casablanca, remember to get the 2008 Bluray and not the 2012 70th Anniversary version, which is too dark and is mainly for grain fetishists.