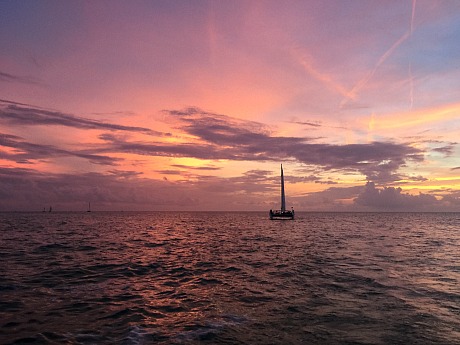 Late this afternoon I paid $85 bills for two hours on a sizable, three-masted schooner. Me and 20 other tourists. A mild but nice experience, and well worth it for the sunset photo ops. 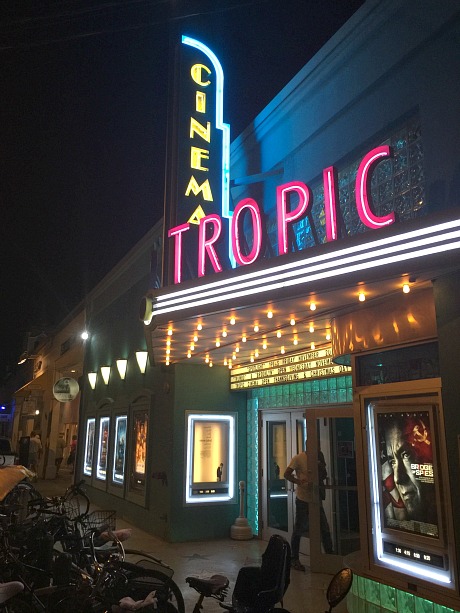 Key West’s Tropic Cinema (416 Eaton St.) was born in ’04 when it was converted from a department store into a four-theatre plex. All-digital, of course. Beautiful interior design design. Managed by Lori Reid. 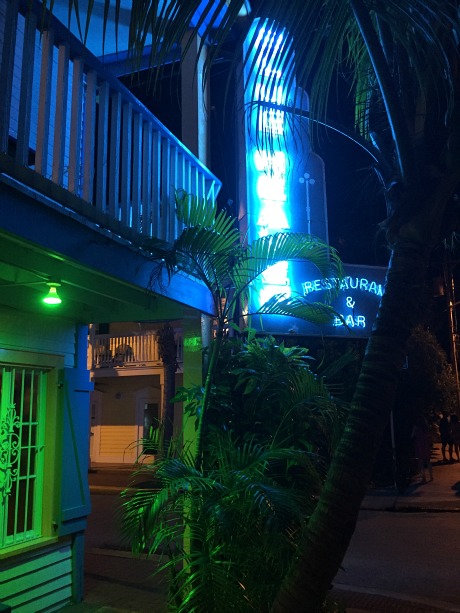 I thought the first screening of The Revenant would be a smallish thing on the Fox lot, and mainly for Inarritu loyalists like myself. Nope. The first peek-out, happening four days hence (i.e., Monday, 11.23), will be a huge screening at the Academy’s Samuel Goldwyn theatre at 8 pm, complete with a post-screening q & a with the cast and crew (Inarritu, DiCaprio, Hardy, Chivo, et. al.). And the post-embargo review date is not 12.2, as I was told two days ago, but Friday, 12.4 at 1 pm Pacific. Update: There will also be an AMPAS/guild screening early Sunday evening on the Fox lot; there will also be a National Board of Review screening in NYC on Saturday, or so I’ve been told.

Nine days ago I said it was high time for Sony Pictures Classics to put up a trailer for Laszlo Nemes‘ Son of Saul (12.18), and here it finally is. And I have to be honest and say it doesn’t really convey what it’s like to watch this searing film. The visual element doesn’t seem as knockout-level as it does in the real deal. Due respect but SPC should give it another go. Saul is too good a film to be sold in a way that doesn’t fully correlate. I don’t just mean the stark, devastating fashion in which the story is told but the feeling of dazzling mise-en-scene that comes through concurrently.

Filmmakers and celebrities who admire Cary Fukunaga‘s Beasts of No Nation have been hosting NY, LA & San Francisco screenings of the Netflix release, but they don’t want to be quoted by press about their support. Films like Beasts and Love & Mercy need all the help they can get, but generally speaking noteworthy industry names who worship these Oscar contenders (or who would like to work with Fukunaga or Bill Pohlad down the road) like to keep things private. I tried going through regular channels to get a quote about Love & Mercy from Jane Fonda (I’d been told she’s a big fan) but her rep wouldn’t even respond to my request. I finally asked Jane directly during Monday’s Youth press conference and she shared her feelings. Here’s a roster of celebrity talents, producers & players who’ve hosted Beasts screenings: 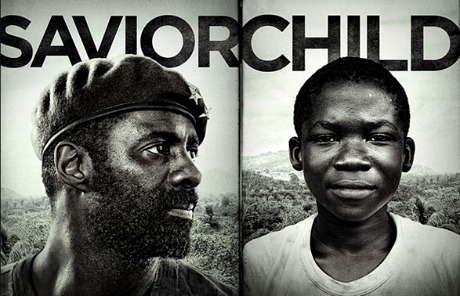 Received yesterday from Hollywood Reporter critic Todd McCarthy: “Well, now I guess the cat is out of the bag concerning my double life and my negative review of Spotlight. After all, I can’t go around writing raves of my own films.” 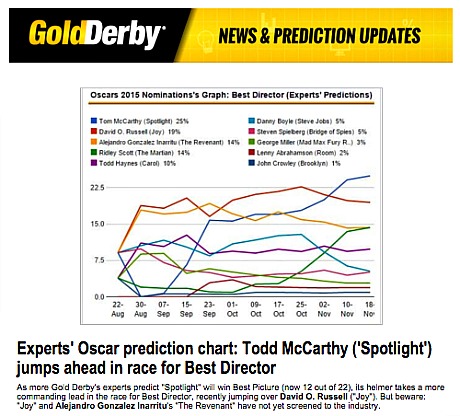 CNN and MSNBC are beating the “ISIS is coming, beware of their bullets and bombs” drum over and over. Obviously the ISIS threat is real and horrific, but the media is hammering this story like the scariest thing since 9/11 or Hurricane Sandy. They’re not reporting anything inaccurately, but they’re playing into the hands of these crafty psychopathic losers, it seems, by exaggerating their strength. Fear drives ratings. Note: The video was captured just before Hasna Aitboulahcen, a 26 year-old female cousin of the recently-wasted Abdelhamid Abaaoud, blew herself up. French SWAT-like policewoman: “Where is your boyfriend?” Hasna: “He’s not my boyfriend!” French policewoman: “Where is he?” Hasna: “He’s not my boyfriend!” And then BOOM…intestine wall-splat. Abaaoud was killed soon after, his body so riddled with bullets that he reportedly could only be identified with a fingerprint check.

12 Comments
A Festival That Dares To Celebrate Showgirls

Yes, the Key West Film Festival actually intends to celebrate the 20th anniversary of Paul Verhoeven‘s Showgirls. They’re selling this, I gather, on the basis of this 1995 debacle being some kind of post-ironic, “so bad it’s good” camp classic…something like that. The screening will happen Friday night, and Verhoeven, 77, is here…whatever. Last night I met KWFF founder & chairman Brooke Christian, KWFF director of programming Michael Tuckman and vice chairman Stephen Ananicz — goodfellas. Thanks also to guest services chief Lauren Luberger, who put me in the Marker. I missed the KWFF‘s opening-night screening of Spotlight at the San Carlos Institute, but then I’ve seen it four times. I also missed a post-screening interview between Washington Post film critic Ann Hornaday and ex-Boston Globe editor Ben Bradlee, Jr., who’s charismatically portrayed in Tom McCarthy‘s film by John Slattery. 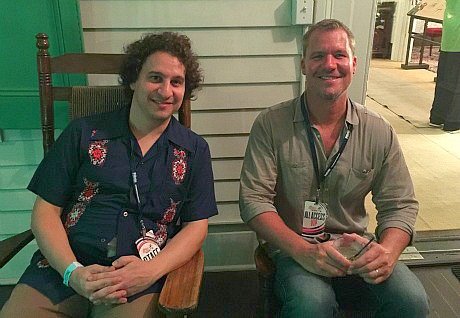 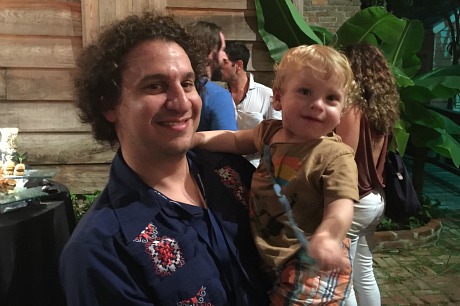 Heartfelt thanks to the Key West Film Festival guys for bringing Hollywood Elsewhere to this hot & humid, wonderfully fragrant, somewhat boozy tropical neverland for four days (i.e., last night thru Sunday). HE was dark for several hours yesterday due to a lack of wifi on my LAX-to-Miami flight. And then I checked in and walked around and attended the KWFF opening-night party at the storied Audubon House. I’m staying at the upscale, totally pleasant Marker Resort, but if I had my druthers I’d be crashing at the Cypress House, an old (built in 1888), cultured hotel that dares to possess a slightly faded, Ernest Hemingway-esque, early 20th Century vibe — an almost repellent notion when it comes to your typical 2015 Kardashian-Kanye tourist who wants only brand-spanking newness and nouveau luxury. There’s a barricaded 1% aura around the Key West Westin Resort & Marina — if you’re not staying with us, keep your distance. I’ll be renting a bicycle today and maybe even a kayak…who knows? It’s touristy as fuck on Duval Street and around the Marina, but if you selectively edit that stuff out and concentrate on the other-worldliness — the quiet and shaded historical areas, the sea and sand, the Bahamian conch-style homes and the delicious scents and aromas, the feeling of being in a little hamlet that’s beginning to succumb to the U.S. of Vulgar Over-Commercialization but is nonetheless holding firm in certain areas — and the friendliness of the locals, and it’s pretty hard not to feel good about…well, everything. 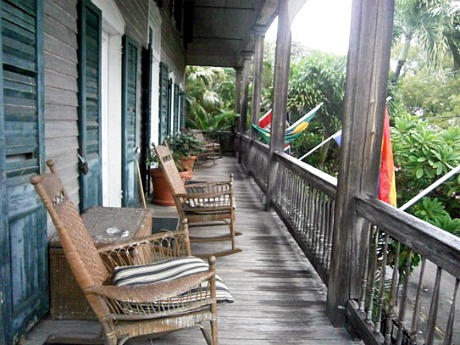 One of the porches at Key West’s Cypress Hotel — the coolest old-vibe establishment I’ve yet come upon, and reportedly haunted. 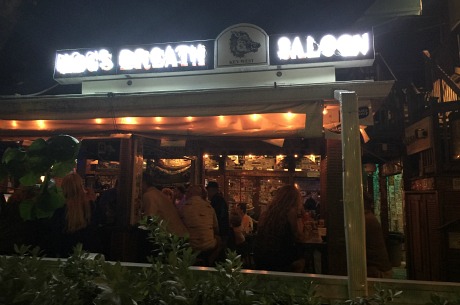 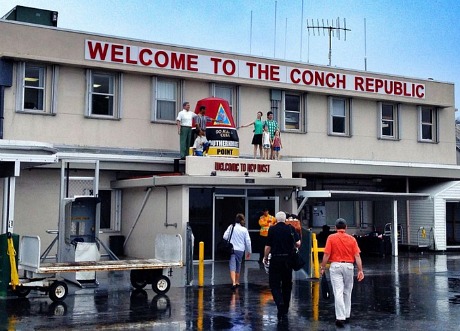 It’s great to disembark from your jet and walk right onto the tarmac and feel that warm, tropical on your face, and then you spot that sign on the airport terminal announcing where you are. 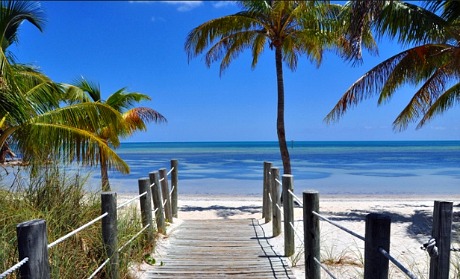 There are many sights and sounds, I’m sure, that signify or summarize the Key West atmosphere, but I’ll go with this morning’s rooster wake-up for the time being. Dawn hadn’t broken at 6:20 am as I stood on the small mini-balcony of room #220 at Key West’s Marker Hotel and recorded the crowings. The humid air, even at this hour, verges on hothouse, and the rich earthy aromas (which were exterminated in most areas of Los Angeles decades ago) are to die for. Welcome to the Conch Republic — a haven of revelry and ghosts and abundant tropical flora…a kind of expatriate aura, a realm apart, Florida’s answer to the leftwing, architecturally storied, cool-cat vibes of Austin and Savannah…o come all ye tourists and party animals! But also flavored and punctuated with little pockets of haunted Hemingway-esque history. When you turn on a TV in a typical middle American hotel room, the default channel is usually Fox News. But in Key West it’s MSNBC…okay? Again, the roosters.