I re-watched half of Rocky last night — hadn’t seen it since ’76. I’d forgotten that it expends over a half-hour of pure character-and-milieu exploration (i.e., the audience getting to know Rocky Balboa‘s grim, probably-no-exit life) before the inciting incident happens — before Apollo Creed decides he’d like to fight an unknown “eye-talian.” In the old days (i.e., the ’90s and before) inciting incidents happened somewhere between page 20 and 26. I haven’t done a study or poll but I’ll bet that in these ADD times inciting incidents are happening a bit earlier. Man on Fire‘s inciting incident (i.e., the kidnapping of Dakota Fanning) happens around the 45-minute mark. 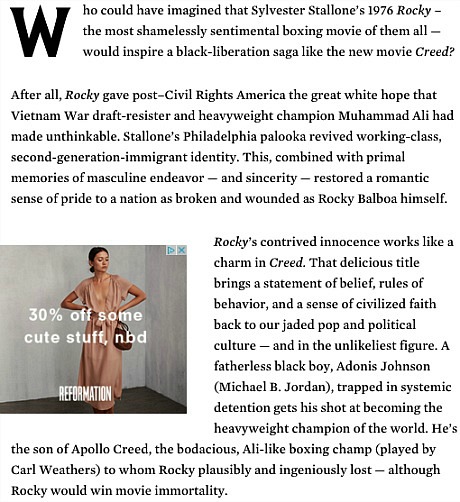 Jeffrey Wells to Marc Maron: “I’m the Hollywood Elsewhere guy (www.hollywood-elsewhere.com). I’m friendly with Mike Binder, the “Keep Calm” author whom you recently interviewed. My story is somewhat similar to yours…a standup comedy career that gradually dried up and then you began wtfpod.com. I was banging around in entertainment journalism, doing well as far as it went, and then I lucked out with online journalism starting in ’98, first as a paid columnist before starting my own site in ’04. If you want to chat we could cover…whatever, the whole award-season waterfront and maybe some of my half-colorful backstory and side stories (or not). Or we could let it all go. I only know that my tale is fairly interesting and somewhat similar to yours. Let me know & be well.”

I stopped getting high as a rule in the mid ’70s, partly because I’d begun to hate the sense of weird isolation I was feeling when fully ripped. Pot is not a social drug — it’s about having giggly fits about tickly notions that are mostly in your head alone. And then it’s about spiralling down through the looking glass and becoming a flying monkey. And then about succumbing to the munchies. It was also because pot opened the door to “the fear” — that mounting panic anxiety state that led to wild inconsolate hell and nerve-jangled insanity from which there could be no return. During a visit to Cinevegas in ’02 or ’03 I stupidly ate a super-potent pot brownie and got so ripped I had to down an entire fifth of Jack Daniels to keep the anxiety at bay. But I really loved my early experiences of getting seriously baked, and particularly that odd time-loss thing that would happen every so often. I would be riding in the backseat of a friend’s car and just leave the planet for places unknown, and then I would suddenly awake and be somewhere new…how did I get here? I could have been space-tripping for five minutes or five seconds — I couldn’t tell but I had left the realm. I’ll never forget that “whoa, what just happened?” feeling.

In a comment thread about Friday’s “They Call Us Dweebs For A Reason” piece, I wrote the following: “I have the ability to read festival reviews plus I’ve developed highly sophisticated sensors (i.e., insect antennae) that can spot movies aimed at film snobs a mile away — highly intelligent films with a highly refined or uncompromised aesthetic factor that seem to be coupled with a lack of interest in providing any semblance of an emotionally engaging current or, failing that, at least an attempt to meet the viewer halfway. We all know what dweeb cinema is and we all know what dweeb-elites look and talk and dress like. (A picture is worth a thousand words but I can tell you I’ve never seen a dweeb wearing my idea of cool shoes…not once, not ever.) They’re a breed apart, a club, a cloistered semi-secret order with their own way of being and relating, a fraternity that insists that applicants prove beyond a shadow of a doubt that they are fundamentally opposed to the concept of commonly-defined movie pleasure. That said, I wouldn’t want to live in a world without film snobs because their influence delivers a much-needed cultural counter-balance to philistine-idiot popcorn movies. All hail Son of Saul, Carol, Anomalisa and the cinema of Christian Petzold.” 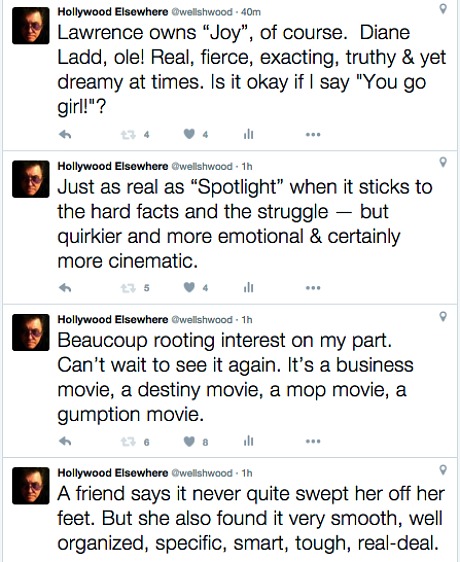 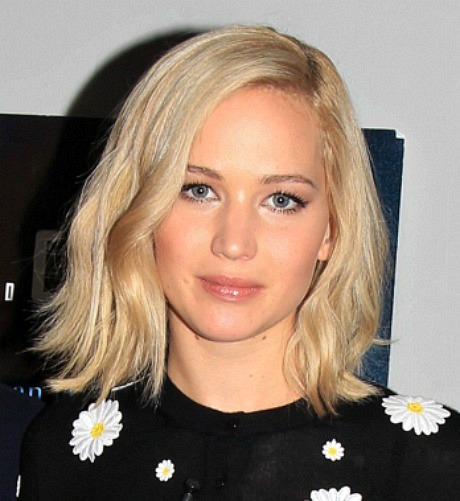 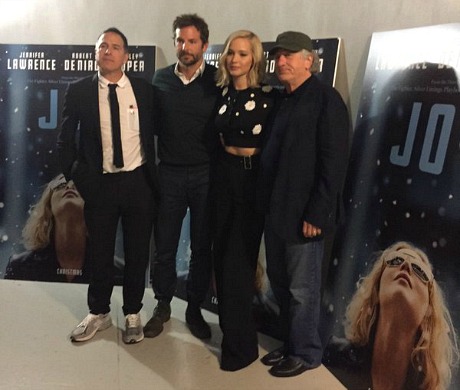 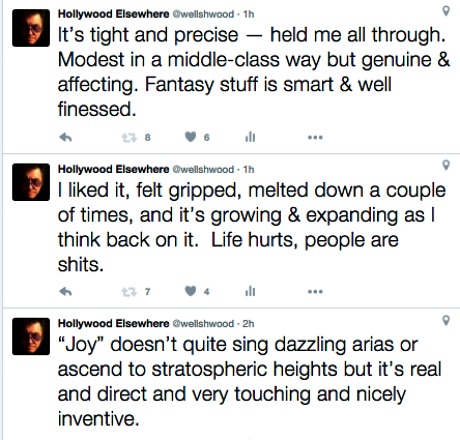 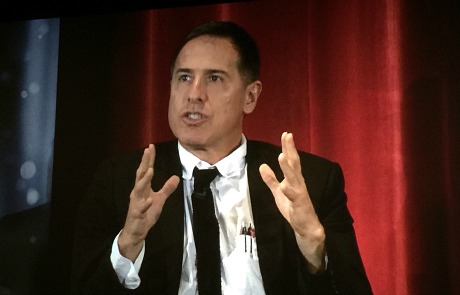 Another superhero-vs.-superhero dukeout movie, arriving a little less than two months after Batman vs. Superman: Dawn of Justice (Warner Bros., 3.16)? If anyone can pull this kind of thing off it’s the Russo brothers, who seem to be the best thing to happen to superhero movies in a dog’s age and are, in my eyes, antidotes to the Zack Snyder virus. But I’m dreading the prospect of watching Robert Downey, Jr. doing his Tony Stark/Iron Man sardonic multi-billionaire quipster bullshit for what feels like the ninth or tenth time. Please kill this guy off. Enough.

None of the distributors want to police or restrict category fraud (i.e., running Carol‘s Rooney Mara as a Best Supporting Actress contender) because they all want to keep the option open because sometimes you can get away with it and, you know, win

But if they did want to correct things, The Hollywood Reporter‘s Scott Feinberg has offered a suggestion that makes basic sense. Feinberg proposed a uniform 50% rule — “If you’re onscreen for 50 percent or more of a film’s running time, you’re a lead, and if you’re onscreen for less than 50 percent, you’re supporting,” as he puts it. Feinberg adds that in the matter of the Oscars these designations would be open to appeal to the three representatives of the acting branch serving on the Board of Governors.”

But of course with the 50% rule Anthony Hopkins could have never won Best Actor for his performance as Hannibal Lecter in The Silence of the Lambs (’91) because he was only on-screen for 16 minutes. So nothing’s going to change. Our brand is fraud or at least occasional fraud…and we like it that way. 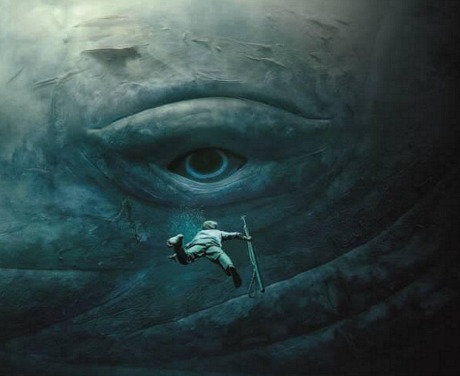 168 film critics have voted for what they consider to be the year’s finest film achievements in the 2015 Sight & Sound/BFI poll, and the results are about what you might expect. I partly admire this crew and am partly shaking my head at the ivory-tower-ishness of their choices. No Spotlight, Revenant, Love & Mercy, Brooklyn? The Assassin is their top dog followed by Carol (HE-approved), Mad Max: Fury Road (HE approved), Arabian Nights (what?), Cemetery of Splendor (come again?), No Home Movie (haven’t seen it), 45 Years (HE approved), Son of Saul (totally HE approved), Amy (entirely decent but calm down), Inherent Vice (absolutely not HE approved…hated it), Anomalisa (fine), It Follows (HE approved), Phoenix (still haven’t seen it), Girlhood (haven’t seen it), Hard to Be a God (come again?), Inside Out (good film but calm down), Tangerine (included mostly because it was shot on an iPhone 5), Taxi Tehran (seeing it soon), Horse Money, The Look of Silence, et. al.

Sasha Stone and I recorded an Oscar Poker chat three or four hours ago. We began by discussing the big, ridiculous Twitter blow-up over my posting of those four horrible words (“Forget women seeing this”) at the end of an otherwise laudatory tweet about The Revenant. I let go with a fair amount of anger about this episode, but at least it’s real. After hashing this out we began discussing Best Picture contenders with a special focus on Creed, Joy and The Hateful Eight. The general assumption is that if the Joy consensus is exuberant seven days hence then the Best Picture Oscar contest will basically be a Joy vs. Spotlight thing with Creed and The Martian duking it out as the populist popcorn favorites. Again, the mp3.

I for one have never seen an Ultra Panavision 70 film projected correctly (i.e., 2.76:1) inside a theatre in my entire life. I saw a restored version of Ben-Hur (which was shot in Camera 65, the exact same process) at the 2011 New York Film Festival, but they showed it within a 2.55:1 aspect ratio. I’m not persuaded that Ultra Panavision 70/Camera 65 flicks that played in the ’50s and ’60s (Raintree County, Ben-Hur, How the West Was Won, Mutiny on the Bounty, It’s a Mad, Mad, Mad, Mad World, The Fall of the Roman Empire, etc.) were shown in 2.76:1. I suspect that they were mostly projected at 2.55:1 except at the Cinerama Dome, which of course was built to project extra-wide Cinerama films. 2.76:1 is really, really wide. I’m familiar with the full-width Ben-Hur and Mutiny on the Bounty only from looking at the DVD/Blurays. So when I see an Ultra-Panavision 70 version of The Hateful Eight early next week, it’ll be my first encounter with this process on a big screen.

Nobody deserves the Best Supporting Actor Oscar more than Love & Mercy‘s Paul Dano…nobody. I’m sorry but that’s how it is. At the same time no one is disagreeing that Creed‘s Sylvester Stallone, a late arrival, is all but locked for a BSA nom. Which leaves three slots. By my yardstick they belong to Bridge of Spies‘ Mark Rylance, either Mark Ruffalo or Michael Keaton in Spotlight (does the fact that Emma Stone is hosting a dinner for Keaton on 12.2…does this mean voters will end up voting for him over Ruffalo?), and Michael Shannon in 99 Homes/Freeheld. I agree that Sicario‘s Benicio Del Toro and Beasts of No Nation‘s Idris Elba should be in there, but there are only so many hands in a deck of cards.