Congrats to the makers of the 15 documentaries that have made the Academy’s shortlist — Amy, Best of Enemies, Cartel Land, Going Clear: Scientology and the Prison of Belief, He Named Me Malala, Heart of a Dog, The Hunting Ground, Listen to Me Marlon, The Look of Silence, Meru, 3 1/2 Minutes, 10 Bullets, We Come as Friends, What Happened, Miss Simone?, Where to Invade Next and Winter on Fire: Ukraine’s Fight for Freedom. Due respect but it was seriously shortsighted for the Academy’s doc committee to dismiss Colin Hanks‘ All Things Must Pass, Ondi Timoner‘s Brand: A Second Coming, Doug Tirola‘s Drunk Stoned Brilliant Dead, Kent Jones‘ Hitchcock Truffaut and Amy Berg‘s Janis: Little Girl Blue. The winner of the Best Feature Doc Oscar will be announced during the 2.28.16 Oscarcast.

People in the loop are universally disagreeing with Matt Drudge’s report that Leonardo DiCaprio is raped by a bear in The Revenant. I wrote Drudge a little around 8:30 am this morning to alert him to the error, and then I posted a piece about this around 9:40 am. Everyone errs now and then. All Drudge had to do was check around and post a correction. But the headline is still up at 2 pm Pacific/5 pm Eastern. Wells to Drudge again: It’s a wrongo, man. Really — I’m not lying to you.

Okay, the unmasking is good (a bit like Jack Hawkins ripping Joan Collins‘ dress off in Land of the Pharoahs) but the four guys bowing down as Superman walks by is seriously ridiculous. Batman v. Superman: Dawn of Justice doesn’t open for another four months but I’m already dedicated to hating it with a passion. Even the title is idiotic — how does a battle between these two superbozos amount to a dawn of anything, much less justice?

George Miller‘s Mad Max: Fury Road is one of the most visually arresting, elegantly composed action films ever made and is easily among 2015’s finest, so I have no issue at all with the National Board of Review giving it their Best Film award. And giving Creed‘s Sylvester Stallone their Best Supporting Actor award (and thereby semi-officializing his award-season momentum) is fine by me. And I fully agree with Son of Saul getting their Best Foreign Language Film award. But The Martian‘s Matt Damon winning the Best Actor award instead of Leonardo DiCaprio in The Revenant? I’m glumly resigned to Room‘s Brie Larson winning several Best Actress awards so fine, whatever, and I haven’t seen The Hateful Eight (the first screening is tonight) so no comment on Jennifer Jason Leigh winning Best Supporting Actress and Quentin Tarantino winning for Best Screenplay. I just don’t like the NBR very much, and I really don’t like the fact that they ignored Spotlight, Joy, Carol, Brooklyn, The Big Short, The Revenant…seriously, why did they go for so many popcorn movies?

The NBR used to be made up of a bunch of crusty old-school Manhattanites — old biddies, jaded alcoholics, etc. Now, to judge by today’s vote, it seems to be ruled by 45-and-under action/genre/sci-fi geeks.

We all know that winning a Best Actor Oscar is not so much about the quality of a performance (although that obviously counts) as a compelling narrative that Academy voters want to cheer or express a kinship with. Two years ago Matthew McConaughey‘s narrative (actor saves career from romcom suffocation by switching to quality-level roles) won over Leonardo DiCaprio‘s (gifted, much-nominated actor delivers bravura, ironically over-the-top performance and scores big-time with legendary quaalude scene). This year DiCaprio, back in the game with his all-in Revenant performance, has a new compelling narrative — he suffered, he froze, he ate animal organs, he gutted a dead horse and crawled inside the carcass, he brilliantly simulated being attacked by a bear, etc.

But the suffering thing needs to be coupled with a supplementary narrative, which is that the Wolf quaalude scene is too good, too classic and too hilarious to have been deemed insufficient for a win. Amends need to be made. This is why Leo must and shall win over Black Mass‘s Johnny Depp. Depp, no question, gives a fascinating performance as a stone-cold sociopath but what’s the narrative? I’ll tell you what the narrative is. Depp was super-rich from the Pirate movies but he needed to expand his repertoire so he manned up and found his groove by wearing a heavily hair-sprayed Whitey Bulger wig and Alaskan-husky contact lenses.

A N.Y. Post description of a passage from Carly Simon‘s “Boys In The Trees,” which popped on 11.24: “About a month into a romance with Warren Beatty, Carly Simon got a call from him saying he was flying to New York from LA and absolutely had to see her. He’d be getting in at around 12:30 a.m. and would have to be gone by 5:30 for an early-morning shoot. He arrived, and the couple ‘made love like in a movie.’

‘“Warren was such a professional…the pressure points he knew about stirred a tremor in me,’ Simon writes. “Warren seemed to have created a brand new manual on how to make love.”

“After he left, Simon slept, then went for an 11 am appointment with her longtime therapist, whom she identifies as ‘Dr. L.’ She was raving to Dr. L about her night and what a ‘superman’ Beatty was in the sack, when she saw ‘Dr. L looked unwell.’ She asked what was wrong, and he told her.

I’m sorry for not posting more quickly about the 11.25 passing of editor Elmo Williams. He was 102 years old. The High Noon tick-tock sequence is the reason Williams won the 1952 Best Editing Oscar, but if you watch it very closely Williams’ metronomic timing is sometimes very slightly off. Watch it again — the one-two-three-four montage was edited to match Dimitri Tiomkin‘s music, Williams wrote in his memoir, so every cut was supposed to happen at the precise instant of the final beat…but it doesn’t quite happen that way. Sometimes a cut will be a millisecond too early or late. I love this sequence but if I allow myself to get too anal about the timing it’s almost infuriating. Almost, I say.

Out of my once-active friendship with Matt Drudge and out of appreciation for his having posted a JEFFREY WELLS link on the Drudge Report for 15 years or so, I sent him the following message this morning: “I’ve seen The Revenant and the bear-attack scene your source has told you about is NOT a bear ‘rape.’ Paul Gleason got raped by a gorilla in Trading Places but this is a different deal. There are two or three bear cubs nearby — the scene is obviously about a mama bear going after Leo to protect her cubs. Terrifying aggression but no rape. Your source is off.” 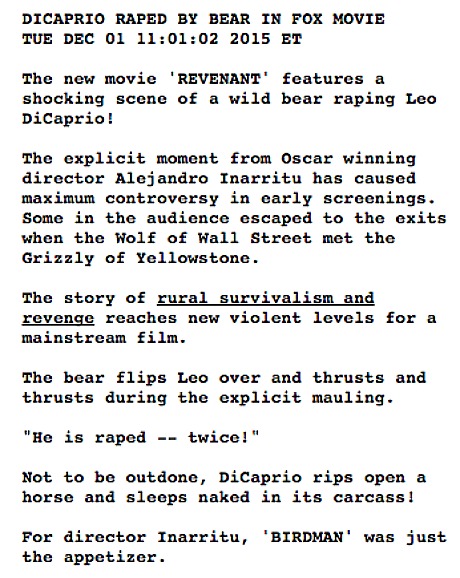 For his historic performance as the young Brian Wilson in Love & Mercy, HE’s own Paul Dano won the Best Actor award tonight at the 2015 Gotham Awards — champagne cocktails! Spotlight won the Best Feature award (totally expected) and Tom McCarthy and Josh Singer‘s Spotlight screenplay won also. And the Spotlight actors collected a previously announced Special Jury Award for Ensemble Performance. I was kidding when I wrote the headline — the Gotham wins for Spotlight are a good start but only that. I suspect that Spotlight will probably go all the way but who knows? The big thing tonight, in my view, is the Dano win — a compelling and perhaps even decisive argument for the Academy nominating Dano for Best Supporting Actor, at the very least. Gotham for Best Documentary: The Look of Silence; Gotham Independent Film Audience Award: Tangerine; Gotham Best Actress: Bel Powley, The Diary of a Teenage Girl; Gotham Best Screenplay: Spotlight.