I remember the derisive chortles during an early press screening of John Derek‘s Tarzan, The Ape Man (’81). I presume that the idea behind the making of David Yates‘ The Legend of Tarzan (Warner Bros. 7.1.16) was to take things in a semi-classy direction a la Hugh Hudson‘s Greystoke (’84). My nose, alas, is smelling a dogshit programmer. The CG is obviously excessive if not ludicrous. Any movie in which the hero swan dives off a high cliff or building is automatically problematic. Why would Alexander Skarsgaard and Margot Robbie costar in this thing? You know that a movie is ahead of the curve when it casts Christoph Waltz as the villain…right?

Yesterday I received a Revenant promotion in the form of an old, dusty-feeling book containing aged parchment, a somewhat florid poem/narrative written by director Alejandro G. Inarritu, black-and-white photographs along with simulated 19th Century daguerrotypes of Leonardo DiCaprio, Tom Hardy, Forrest Goodluck and one other. The book is titled ‘THE REVENANT — a poem on the subject of HUGH GLASS as translated for a study in pictures by ALEJANDRO G. INARRITU.” The feeling of this thing…delicate in the way of decades-old books and documents with the worn binding and all…even the smell of it…a truly impressive artifact that must’ve taken many, many weeks if not months to assemble.

Since succumbing to Ryuichi Sakamoto‘s Revenant score I’ve been asking the powers that be for an mp3 excerpt or two. I’ve been explaining that people need to hear how sad and strikingly solemn Sakamoto’s anthem is, particularly for its simplicity as it pretty much boils down to six or seven notes. Those bassy symphonic strings have melted me down twice now, as I wrote on 12.4. But the soundtrack guys have been saying no to the excerpts — wait until the album is digitally released by Milan Records on 12.25. So I recorded a portion off the Revenant screener that arrived yesterday. Here it is. Definitely from the same guy who composed the Merry Christmas, Mr. Lawrence theme.

34 Comments
In The Heart Of The Sea Blows Whale Blubber

It hit me yesterday afternoon that I’d forgotten to write a review of Ron Howard‘s mostly mediocre In The Heart of the Sea (Warner Bros., 12.11). So I tried to bang something out but it wouldn’t come. I just tried again an hour ago, but I don’t give enough of a shit. (Writing about something you care about is fairly easy or at least not too difficult, but when you don’t care it’s always a slog.) Sea is basically a primitive B-level adventure saga that indulges in tired popcorn cliches. And it has only sporadic interest in the real-deal particulars of the notorious Essex tragedy, which not only inspired Herman Melville’s “Moby Dick” but which are more interesting than the film’s simple-dick tale.

The Essex disaster was described in first-person accounts by Essex cabin boy Thomas Nickerson (whose 1876 book, “The Loss of The Ship Essex — Sunk By A Whale — and The Ordeal of the Crew in Open Boats,” didn’t publish until 1984 due to the manuscript being lost until 1960) and first mate Owen Chase, who wrote a book about the Essex disaster only months after returning to Nantucket (“Narrative of the Most Extraordinary and Distressing Shipwreck of the Whale-Ship Essex“) and saw it published in 1821.

It was Chase’s book that inspired Melville to write “Moby Dick” and not, as Charles Leavitt‘s screenplay imagines it, as a result of Melville (Ben Whishaw) interviewing a reluctant and hostile Nicholson (Brendan Gleeson) about the incident. The screenplay makes no mention whatsoever of the Chase account, and it tells us that the absurdly over-sized whale that sank the Essex stalked and tormented the survivors in lifeboats for weeks after the sinking, which is ridiculous bullshit.

There are shards and sometimes larger portions of truth in Howard’s film, but it lies and omits and often seems to fantasize or otherwise dumb things down. You stop trusting it early on.

I was in a Pacific Palisades shoe store yesterday around dinner hour, and something clicked when I happened to notice a pair of pink shoe laces. Millenials and GenXers will never give a shit but way back in the Paleolithic era there was a mildly popular song called “Tan Shoes and Pink Shoe Laces,” and last night it suddenly hit me that I have a pair of tan shoes and that this was the moment. And speaking of old songs, here’s how the first line of Elton John‘s “Don’t Let The Sun Go Down On Me” has always sounded to me: “I can’t lie no more aubrey dog mehhh.” (Actual line: “I can’t light no more of your darkness.”) 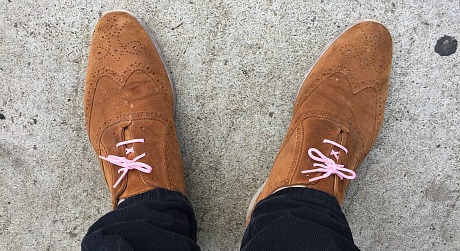 Last Saturday I posted a transcript-plus-mp3 of my Kurt Russell guns-vs.-terrorists discussion, which happened during a Hateful Eight junket interview. And then Sunday (12.6) came and went. And then Monday (12.7) and Tuesday (12.8). And then on Wednesday (12.9) Breitbart.com posted a riff about it. After which a whole bunch of rightwing, armed-to-the-teeth websites (including the hilariously-named newyorkcityguns.com) followed Breitbart’s lead. I can see quoting from an online interview a day or two late, but four days later? The applicable term is “asleep at the wheel.” 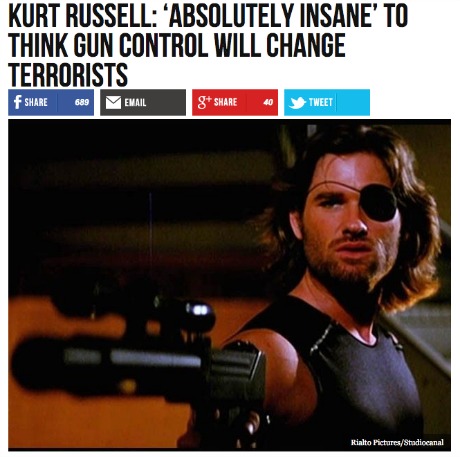 The 2016 Golden Globe nominations were announced this morning by The Hollywood Foreign Press Association. GG noms stir the conversational pot, help SAG-snubbed contenders get back into the psychological/emotional swing of things, focus attention in the major categories, toss in a couple of surprises, etc. Here are the nominees plus HE mood-pocket commentary:

Best Motion Picture, Drama: Carol, Mad Max: Fury Road, The Revenant, Room, Spotlight. HE comment: This is Spotlight‘s to lose. These five are almost certainly the biggies right now in terms of the general conversation, even if Love & Mercy, Brooklyn and Beasts of No Nation deserve their place at the table. I don’t need to remind the community that The Movie Godz are particularly behind Love & Mercy, and concurrently distressed that so many people have said it doesn’t rate because it was released last June. C’mon!

Best Motion Picture, Comedy: The Big Short, Joy, The Martian, Spy, Trainwreck. HE comment: Huzzah for The Big Short! The HFPA can nominate The Martian as a comedy and even give it an award and that’s fine, but that doesn’t change the fact that it died yesterday as a Best Picture contender when SAG declined to give it a Best Ensemble nomination. The likeliest winner is…I don’t know.

Best Actress in a motion picture, drama: Cate Blanchett, Carol; Brie Larson, Room; Rooney Mara, Carol; Saoirse Ronan, Brooklyn; Alicia Vikander, The Danish Girl. HE comment: Larson is the presumptive favorite (am I wrong?) but HE’s rooting interest is for Ronan first and Vikander second. It’s probably safe to say that Blanchett/Mara will cancel each other out.

Best Actress in a motion picture, comedy: Jennifer Lawrence, Joy; Melissa McCarthy, Spy; Amy Schumer, Trainwreck; Maggie Smith, The Lady in the Van; Lily Tomlin, Grandma. HE comment: Schumer is in the running! (Please note that I put her in an earlybird HE Oscar chart last September.) This is mainly between Lawrence and Smith; Lawrence is the likely winner…right?

Best Actor in a motion picture, drama: Bryan Cranston, Trumbo; Leonardo DiCaprio, The Revenant; Michael Fassbender, Steve Jobs; Eddie Redmayne, The Danish Girl; Will Smith, Concussion. HE comment: Leo totally wins this. No way Smith prevails (not with that “I make movies to please my grandmother” remark) but he should nonetheless send a basket of fruit and a bottle of wine to THR‘s Scott Feinberg for getting him this far. Redmayne is a non-starter.

Best Actor in a motion picture, comedy: Christian Bale, The Big Short; Steve Carell, The Big Short, Matt Damon, The Martian; Al Pacino, Danny Collins; Mark Ruffalo, Infinitely Polar Bear. HE comment: Pacino takes it in a walk. Seriously, no clue. Bale and Carell cancel each other out so…what, Damon takes it as a consolation prize for The Martian getting rejected in yesterday’s SAG nominations?

Best Actress in a supporting role in a motion picture: Jane Fonda, Youth; Jennifer Jason Leigh, The Hateful Eight; Helen Mirren, Trumbo; Alicia Vikander, Ex Machina; Kate Winslet, Steve Jobs. HE comment: Fonda owns! Okay, Fonda or Vikander to win. Mirren, Winslet and especially Leigh are placeholders, thrown in to round out the pack. The chief distinction in Leigh’s performance is that she gets slugged six or seven times by Kurt Russell and winds up…okay, no spoiling.

Best Actor in a supporting role in a motion picture: Paul Dano, Love & Mercy, Idris Elba, Beasts of No Nation; Mark Rylance, Bridge of Spies; Michael Shannon, 99 Homes; Sylvester Stallone, Creed. HE comment: Strongest nominee roster of them all — it’s probably between Rylance, Dano and Stallone but don’t call Elba or Shannon slouches. I’m a Dano guy but I respect each and every performance in this category.