More than a few award-season commentators (upscale thoughtfuls, sensitive to social currents) have repeated the “Academy racism robbed Straight Outta Compton of a Best Picture nomination” narrative today. Which is supported, some feel, by the fact that four white people — Jonathan Herman, Andrea Berloff, S. Leigh Savidge, Alan Wenkus — co-wrote the original script, which was the only Compton element that landed an Oscar nomination (i.e., Best Original Screenplay). Is there anyone bold and free-thinking enough to just blurt the truth, which is that Straight Outta Compton just doesn’t have that old Oscar schwingding thing? It’s compelling, accessible, well written, convincingly acted, and it doesn’t feel tricky or shifty. I believed it, went with it, respected it, came out tweeting its praises. But it’s just the N.W.A. story — this happened, that happened, this happened, etc. The p.c. kneejerkers would rather shoot themselves than acknowledge the simple fact that Straight Outta Compton is very good but nothing close to most learned people’s idea of great or transformative or extra-special cinema. It doesn’t wallop or shatter you — it just deals straight, credible cards about the emergence and the power and the cultural changeover of hip-hop in late ’80s and ’90s. I don’t see what’s so bad about that. Audiences and industry types seem to be equally content and pleased with what Compton is, and the fact that it earned $200 million. Why does it have to be a big Oscar thing? 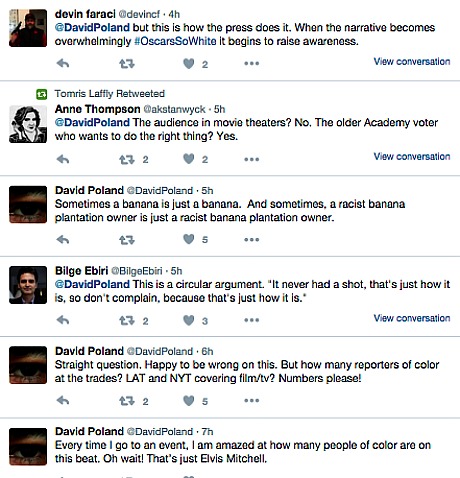 I always rise early when something’s pressing. This morning’s Oscar nominations woke me around 4 am. I finished my first filing just before 7 am, and then came the Oscar Poker podcast between 7:20 and 8 am. I left on the bike around 8:15 am for the Westwood Federal Building and a 9 am passport renewal appointment. It went fairly smoothly. A late breakfast and then back to the pad around 12 noon for an appointment with a Time Warner repair guy. And then more filing. And now a nap. 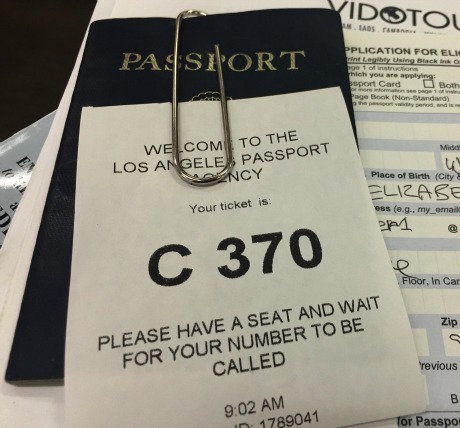 Deadline‘s Pete Hammond reminds that even though The Revenant and Mad Max: Fury Road collected 12 and 10 nominations respectively, which puts them in front of all other nominated films, their screenplays didn’t get nominated. And that, in Hammond’s view, might be cause for concern because “it’s rare for a movie to take Best Picture without a corresponding nod for its script.” The precedents are Titanic (’97), The Sound Of Music (’65), and Laurence Olivier‘s Hamlet (’48). And yet, he acknowledges, the films with the most nominations “are usually more likely to take Best Pic since it means they have more support throughout the entire Academy, which now participates in voting in all 24 categories.” Shorter Hammond: If The Revenant or Mad Max win Best Picture, which is fairly likely, it’ll constitute a statistical rarity.

Sasha Stone, Awards Watch‘s Erik Anderson and I discussed this morning’s Oscar nominations for the latest Oscar Poker. Sasha was initially upset about Ridley Scott not being nominated for Best Director, which means, of course, that The Martian has essentially been given a cottonball Best Picture nomination — i.e., a sop that means nothing. So Erik and I had to go kinda easy and let Sasha work through her feelings like a rational adult, which she did. Neither Erik nor Sasha would admit that The Revenant is far and way the likeliest winner of the Best Picture Oscar at this stage. Not would they grapple with my riff about current racial profiling gripes (i.e., why no nominations for Straight Outta Compton and Creed?) not being worth discussing except in the case of Beasts of No Nation‘s Idris Elba, who definitely should have been nominated for Best Supporting Actor. Again, the mp3. 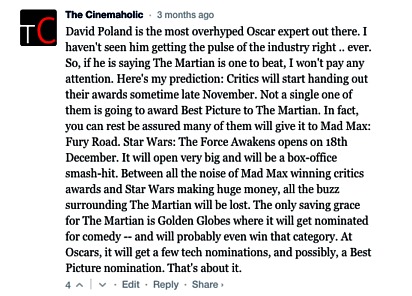 Right now (12:30 pm Pacific) Michael Bay‘s 13 Hours is at 53% on Rotten Tomatoes and 47% on Metacritic. That averages out to a failing grade, and yet I’m telling you it’s somewhat better than that. At the very least it’s a first-rate combat flick. Yes, it’s arguably a little too one-sided and swoony about the small team of mercenaries who defend the CIA annex in Benghazi, but there’s a significant moment at the end when Bay shows various women bemoaning the fallen bodies of anti-U.S. fanatics who attacked the compound, suggesting that humanistic doubts about perpetual warfare and relentless jihad are part of the current over there. Yes, Bay tries too hard to whip the film into a lather. Yes, it would have been better if he’d told the story in a plainer fashion. Yes, he repeats his famous Pearl Harbor “Bayo” when he followed a Japanese bomb dropped from a plane into a U.S, destroyer, this time following the path of a terrorist mortar. But it’s still an efficiently made, often breathtaking action thriller about stopping the baddies and defending lives. Not a burn, trust me.

Yesterday I posted a piece called “Dues and Don’ts,” which partly echoed a 2.20.15 Christopher Borelli Chicago Tribune piece that noted how actors often win Oscars for the wrong roles. This occasionally happens when (a) voters decide that a certain actor is due and to hell with how their latest performance stacks up against past triumphs, or (b) voters decide that this actor has earned a make-up for a relatively recent snub or a long string of them over the previous decade or two. One example of a delayed/makeup, Borelli wrote, was Denzel Washington winning an Oscar for Training Day after his nominated performances in Malcolm X and The Hurricane fell short on votes.

This angered a colleague. “How could Denzel have been ‘due’ for Training Day under your scenario when he had already won an Oscar for Glory?,” he wrote. “Training Day was his second win. Was he ‘due’ for a second Oscar?”

To which I replied: “Denzel’s Glory win didn’t entirely count because that was a nice-to-meetcha Oscar. The industry recognized a star in the making — a cool, charismatic, good-looking black actor of quality. Denzel was very, very good in Glory but the Oscar was mainly a vote-of-confidence thing — an ‘attaboy, keep doin’ that thing and we’ll all work together and make more good movies and tons of money’ gesture. The Training Day Oscar was the real Oscar, given to a mature, established superstar playing a ‘bad guy’ in quotes. On top of which Denzel was completely due after his performances in Hurricane and Malcolm X.”

I haven’t thought this through but I think this “nice to meetcha” vs. real Oscars thing holds water. Young, new-to-the-biz actors are in a position to win “nice to meetcha” Oscars and older, well-established actors obviously aren’t. If Brie Larson wins a Best Actress Oscar next month for her performance in Room, file that under “nice to meetcha.” If Scott Feinberg had managed to get Jacob Tremblay nominated for Best Actor, his winning would obviously qualify in this regard. But it won’t apply, obviously, if Charlotte Rampling wins. Nor can Leonardo DiCaprio‘s all-but-locked-down win for The Revenant qualify. “Nice to meetchas” are only for spring chickens.

January 14, 2016 12:11 pmby Jeffrey Wells
210 Comments
Guess What? The Revenant Is Going To Win Best Picture Unless, You Know, Something Happens

The 2015/16 Oscar nominations are 20 minutes old, and the biggest headline is that Alejandro G. Inarritu‘s The Revenant is now the most likely Best Picture winner as evidence by 12 nominations. It might not win, but we all know what 12 nominations almost always mean. A lot of grumbling, a lot of pushback pieces to come…but the writing is on the wall and it’s not going to easily wash off.

The other big, percolating, machine-gun headlines:

(a) Spotlight, the widely presumed Best Picture front-runner all through Oscar season until last weekend, when The Revenant opened big and took the Best Picture, Drama award at the Golden Globes, is on the ropes and quite possibly toast in terms of Best Picture prospects. Speaking as a Spotlight worshipper from way back, this is very sad news. Comment: The Revenant may be the greater, more ambitious film, but I love Spotlight with all my heart. And yet I have to recognize what’s happened over the last six days — a complete turnaround for The Revenant beginning with last weekend’s $39 million gross, those three Golden Globe awards (Best Picture Drama, Best Director, Best Actor) and now this morning’s 12 nominations. It’s probably all over but the shouting. Tell me how Spotlight or another film can win.

(b) Alejandro G. Inarritu and dp Emmanuel Lubezski are in an excellent position to make Oscar history. What do you say to that, Sasha Stone?

(c) Ridley Scott‘s gold-watch Best Director nomination didn’t happen, despite his being DGA nominated a couple of days ago and The Martian having snagged a Best Picture nomination. Why didn’t Scott make the cut? I’ll tell you why. Room director Lenny Abrahamson (who hasn’t a tiny snowball’s chance in hell of winning) elbowed him aside.

(d) Love & Mercy‘s Paul Dano wasn’t handed a Best Supporting Actor nomination, to the eternal shame of the Academy and particularly because the majority of blogaroonies resisted the Dano movement by ghetto-izing Love & Mercy as a non-starter because it opened last summer — this is on you, blogaroonies!;

(e) “No black nominees” (particular attention is being paid to the absence of Straight Outta Compton and Creed noms) is not a story because racial quotas are bullshit — Compton and Creed are good, engaging, well-made films, but the Academy decided they weren’t quite good enough to be nominated, and that’s that;

(g) All of those Jacob Tremblay supporters (first and foremost The Hollywood Reporter‘s Scott Feinberg) are shaking themselves off right now and saying “okay, okay, I got a little carried away but the kid nailed it”;

(h) The Academy bought the category-fraud narrative that Carol‘s Rooney Mara gave a supporting performance. Because, I’m guessing, they really liked Cate Blanchett‘s costarring performance and wanted to nominate her also, which meant slotting her into the Best Actress category. Right?

(i) How did Cheryl Boone Isaacs manage to screw up the pronunciation of Alejandro G. Inarritu‘s last name? The guy’s been a big deal in this town for the last 15 years.

What else? I’m still working on this but I don’t have oodles of time as I have a 9 am appointment at the passport office in West Los Angeles. It’s 6:31 am as we speak.

The Oscar nominations are about be announced but here’s to the legendary Alan Rickman, whom cancer has taken at age 69. Not a good week for famous, gifted 69 year-old Brits and their fates, but let’s dwell on the “gifted” and let the rest float away for now.