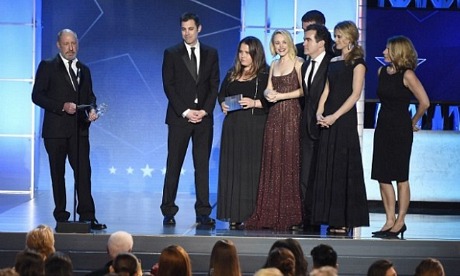 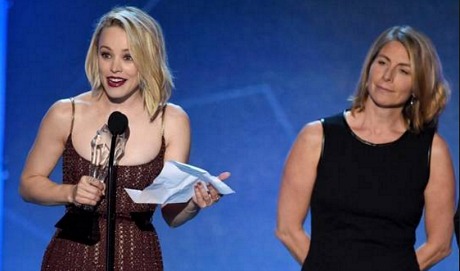 A colleague has responded to yesterday’s post about an alleged edge enjoyed by Charlotte Rampling in the Best Actress race (“Feinberg’s Rampling Pushback…Yes!“):

“Don’t get on his high horse about Rampling. That would be a huge upset as 45 Years only has a single nomination — hers — and those in Best Picture nominees like Brie Larson or Saoirse Ronan have a much greater advantage historically since it is the entire Academy that votes. I love Rampling and have been one of her biggest champions since Telluride, but with not even a BAFTA or a SAG nomination and a movie that will more than likely be turned off by many voters who watch on DVD and won’t go for the slowness of it all, forget it. Many have voted for Rampling in the BFCA balloting to get nominated and now to win. But she won’t. Room, with its Best Picture, Director, Screenplay noms and now a surging box-office, has all the momentum for Larson. Only Saoirse could upset because of the love for Brooklyn.”

In a just posted State of the Union interview with Jake Tapper, Donald Trump claims that he has a “very great relationship with God.” As opposed to…what, a mildly fulfilling relationship with the Almighty? What Trump meant, I think, is that he has a Thomas Becket-like attitude. Trump respects God as far as interviews with the media are concerned, but he doesn’t worry about His judgment all that much, as he is fairly secure in the knowledge that God doesn’t judge anyone or anything. So in Trump’s mind they’ve agreed to leave each other alone.

I began my life feeling very angry at God for giving me such a miserable life in suburban New Jersey and especially giving me such strict, hard-nosed parents, particularly a mother who made me go to church every damn Sunday. Then in my teens I went through a period of mocking and taunting him. Then I embraced and worshipped Him as a result of my mystical LSD trips in my early 20s. Then I came to a Trump-like understanding that God is, depending on how lucky or unlucky you are in terms of parental or tribal lineage and birth location, at best impartial about whether you’re living a happy or miserable life.

Then again God does give you the freedom to become someone like Donald Trump or David Bowie or whomever. If you want happiness and you’re not living under a horrible dictatorship, orchestrate your own version of it without making things worse for others.

13 Comments
Not So Fast

This is nothing more than a couple of sharpies trying to gin up interest in a Best Picture race that is not as wide open as they’re suggesting. Pete Hammond thinks the real comers are Spotlight and The Big Short because they have nominations in directing, writing, acting and editing. Hammond and O’Neill, in fact, believe that Spotlight is rebounding, and maybe so. And no one will be happier about a Spotlight win than myself. But if The Revenant sweeps or wins big at today’s Critics Choice Awards, which has historically mirrored the Academy more than the HFPA, its momentum will be all the stronger. It has 12 nominations, is going great guns at the box-office, Revbros, etc.

I’ll be driving over to Barker Hangar around 3 pm today. The show kicks off at 5 pm.

Listen to Michael Musto: Journalism films “never win,” he notes, and when you look hard and long The Revenant looks like a safer bet to win Best Picture. “Slog equals best picture…did you snuggle up to 12 Years A Slave? Did you cuddle up to No Country For Old Men?” Kudos to Musto for describing Mark Rylance‘s Bridge of Spies performance as “recessive.” On top of which Sasha Stone has predicted a no-win for Spotlight because of some BAFTA shortcoming.

Six or seven weeks ago some blowhard over-simplistically suggested that reactions to The Revenant might divide along gender lines. The idea came from first-hand observation and first-hand heresay, but it was wrong, terribly wrong, to generalize like this. The guy who tweeted this silly, shoot-from-the-hip notion suffered hate and hyena-bites for weeks, and rightly so. We’re all free-thinking individuals under God’s immense sky, and to suggest that gender might have a little something to do with our reactions to this or that film…well, it’s just despicable when someone says something like this. And the fact that we haven’t yet seen a revgirls hashtag is…well, it’s just fucking meaningless. 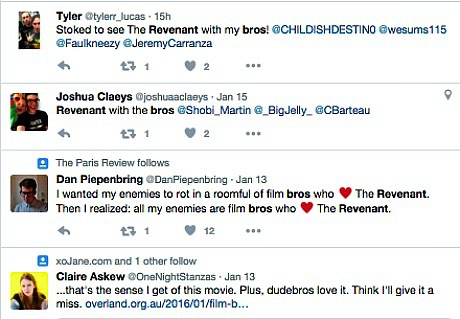 It’s evident that Creed director Ryan Coogler pays close attention. He’s the kind of guy who feeds off anything of value, anything that makes him sharper or more attuned. An Oakland dude, educated but no elitist, couldn’t be a dweeb if he tried. You can feel the spark, the nerve, the engine…he types fast and furious like Justin Chang. Coogler will never be anything or anyone other than himself. A fan of Precious and Inglourious Basterds, he’s one of those guys who will always make movies for audiences, but he also has that keen hunger thing, a taste for heights and expansion. But after Black Panther, he’d be wise to get into something more personal or, you know, maybe in a Fruitvale Station-ish vein. More of a real-deal people movie. Heroism and triumph can turn stale at the drop of a hat.