$30 for a Twilight Time Last Detail Bluray? Yeah, I’d like to have it but the DVD looks fine. Rich, to-die-for hues and fascinating detail were never part of the scheme of this thing. Hal Ashby’s low-key 1973 film was intended to look a little grubby, a little worn-down. Which fit in with the vaguely seedy atmosphere and the schlubby swabby mentality that characterized Jack Nicholson‘s Badass Buddusky and Otis Young‘s Mulhall (a.k.a. “Mule”).  A small classic that doesn’t need high-def.  I’m buying the Bluray regardless. 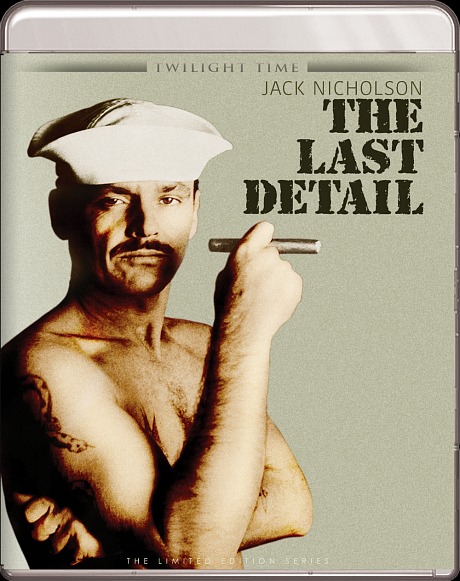 It was announced this morning that Penske Media Corporation (PMC) has acquired Indiewire.com. Which means that industry tea-leaf reader Anne Thompson and leading indie-attitude critic Eric Kohn are now working for the same guy who pays the salaries of Deadline‘s Pete Hammond and Michael Fleming, Gold Derby‘s Tom O’Neil and Variety‘s Kris Tapley, to name but a few. Voices in a choir. And I’m still Charley Varrick, last of the independents, along with Awards Daily‘s Sasha Stone, MCN’s David Poland and…I don’t know, you tell me.

I’m not much for analogies but I’m thinking that Hollywood Elsewhere is a bit like Wyatt Earp, Sasha is like Virgil Earp, Poland is the guy who owns the Tombstone livery stable and the Penske gang is a bit like the Clanton brothers. HE is drawing a bead and riding its own steed across the swamps of time. And I still like the sound of that slogan, “last of the independents.” It has a ring of finality.

I asked Kohn, Indiewire’s chief film editor and critic, how things are going. Is he getting a bump in salary? Will Kohn gradually lose the jeans, comfort shoe and hoodie look and start dressing more like a guy who subscribes to Esquire or GQ? What has he learned in life up to this point? What does it feel like for a former open-range cowpoke to be part of the big combine?

“I’m really excited about this acquisition and what it means for the future of Indiewire,” Kohn wrote back. (People always use the word “excited” in discussing any new job or business partnership.) “It’s early days yet. We’re still figuring out all the details, but I’ll be working out of the PMC office in NYC and the LA team will be doing the same for the one out there. See you at Sundance!”

I can’t remember when there was decent snow during the Sundance Film Festival but it feels like two or three years ago, at least. Climate change has been robbing this festival of its powdery snowfall vibe. Well, I leave tomorrow morning and Weather.com says serious snow will fall tomorrow (temps in the 20s and 30s) and then again next Sunday. So there’s that. 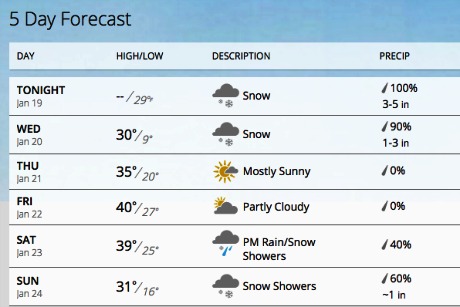 6 Comments
Life As A Dog

Is there anyone who would suggest with a straight face that Huma Abedin, special aide to Hillary Clinton, is in any way responsible for the appalling behavior of her husband, former New York Congressperson Anthony Weiner? Or that Abedin’s decision to marry a politician who turned out to be an online flasher is indicative of a character flaw on her part? Or that this episode somehow tarnishes Clinton on some level? I think anyone who would even hint that Abedin or Clinton might take a hit from Weiner, an upcoming doc that that offers an in-depth exploration of the grotesque sex scandal that forced Weiner to resign from Congress, is being tremendously unfair. Men are dogs, but a woman who stands by a dog when he’s gotten himself into trouble…well, that’s between the two of them but in my book that woman has done an admirable thing. People who don’t cut and run when the going gets rough are made of the right kind of material. And so the 1.19 N.Y. Times article by Amy Chozick and Brooks Barnes that more or less paints Anedin with a disparaging brush (“Film Shows Clinton Aide’s Own Struggle With Anthony Weiner Scandal“) is a fairly low blow. Josh Kriegman and Elyse Steinberg‘s Weiner will have its world premiere next Sunday (1.24) at the 2016 Sundance Film Festival. 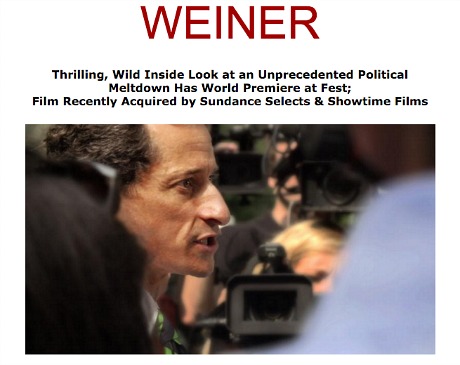 In his remarks about Steven Spielberg‘s 1941, director-screenwriter Mick Garris notes early on that Spielberg “is the guy who dared give me a career.”  This is Garris’s way of apologizing for his extra-gentle descriptions of 1941, which, let’s face it, is widely regarded as the most appallingly unfunny comedy in cinema history. Instead of calling it a disaster, Garris calls it Spielberg’s “least heralded” film. Stanley Kubrick‘s assessment, reportedly shared when Spielberg visited the set of The Shining, was that it’s “not funny but expertly made…you should have sold it as a drama.” The most Garris can manage is to call it “a little bit labored at times….[the comedy] doesn’t quite work all the way through.” You have to tell it straight when you do a Trailers From Hell essay or what’s the point? Who wants to hear diplomatic phrasings about a stinker that opened 36 years ago?

I finally saw Robert Eggers‘ The Witch last night, nearly a year after it premiered at Sundance 2015. It’s easily the most unsettling and sophisticated nightmare film since The Babadook. That’s a roundabout way of saying that the dolts who pay to see the usual horror bullshit will probably avoid it to some extent. Insensitive, all-but-clueless people tend to favor insensitive, all-but-clueless movies, and I’m sorry but The Witch is mostly too good for them — too subterranean, too otherworldly, too scrupulous in its avoidance of cliches. And because it goes for chills and creeps rather than shock and gore. This is the fate of all exceptional, extra-good horror flicks — they must suffer rejection by morons. Just ask Jennifer Kent.

This little creeper (which was projected last night at a 1.66:1 aspect ratio!) is set on an isolated farm in 17th Century New England, when the lore of witches and sorcery was at an all-time high. I was seriously impressed by the historical authenticity and the complete submission to the superstitious mythology of evil in the early 1600s and the panicky mindset of those God-fearing Puritans who completely bought the notion that demonic evil was absolutely manifest and waiting in the thicket. And I was entranced by Eggers’ slowburn strategy, which finally pays off in spades during the final 25 to 30 minutes. And I was fascinated at the allusions to sexuality as a kind of budding demon seed.

The focus is on a farming family of seven — a strong, devout father with a deep resonant voice (Ralph Ineson), a wiry, agitated, asexual mother with a mostly impenetrable accent (Kate Dickie), an intelligent and very hot mid-teen daughter (Anya Taylor-Joy), a younger brother disturbed by sensual stirrings (Harvey Scrimshaw), two toddlers (Ellie Grainger, Lucas Dawson) and an infant — and one of the most fearsome and persistent threats, never acted upon or spoken of but constantly flowing in the blood, is the animal energy of sex.