Support on Patreon Follow @wellshwood
62 Comments
Marcobot Does It Again: “Ram Down Our…Throats”

A Bluray 3D Film Archive restoration of Herbert Strock‘s Gog (’54), a little-seen sci-fi thriller that was barely exhibited in 3D before being downgraded to 2D, will be released by Kino Lorber on 3.1. Gog was painstakingly restored by Bob Furmanek and partner Greg Kintz, who began the project in the late ’90s with only a print of the 35mm left side material. The Bluray will include a restoration segment. Hollywood Elsewhere has had its arguments with Furmanek for his belief in cleavering films shot in the mid to late ’50s in order to deliver the despised 1.85:1 aspect ratio. That aside and giving the devil his due, Furmanek has restored Gog within the original 1.66:1 aspect ratio. 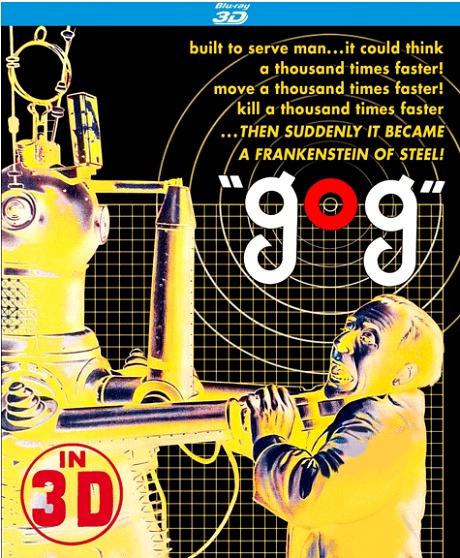 Excerpt from 2.8 Matt Zoller Seitz piece on Billy Wilder‘s The Apartment (’60): “Younger viewers may be struck by how engrossing The Apartment still is, considering how lengthy the scenes are (as in a stage play, they have clearly delineated beginnings, middles and ends) and how rarely Wilder panders to short attention spans by cutting to something else. Many of Lemmon’s best scenes are subtly choreographed one-takes that follow Bud through a space as he fusses, frets and mutters. This film does not ‘cover’ its action as so many modern movies and TV shows do, by photographing every scene with multiple cameras and cutting to a closeup of whoever happens to be speaking. The Apartment is directed. Every shot and cut matters. Confident decisions have been made about what’s in the frame and what’s out, who we’re looking at or listening to, and why.

“Billy Wilder and I.A.L. Diamond‘s screenplay is the foundation of this well-told tale. It makes masterly use of set-ups and payoffs, most of them encoded in props, such as the cracked makeup mirror that reveals that Fran is Jeff’s mistress (while also reflecting her shattered self-image); the hundred-dollar bill that Jeff gives Fran, which becomes her wordless suicide note, and the album by Jimmy Lee Kiang, the piano player at Fran and Jeff’s favorite Chinese restaurant, which announces Fran’s presence in Bud’s apartment and explains why she nearly died there. The movie is a masterpiece, structure-wise and otherwise — a rare Best Picture Oscar winner that might actually have been the year’s best picture.”

The Spotlight Bluray pops on 2.23. An HDX version is streamable as a purchase/rental on Vudu right now. The ad art on both sites is a dark detour away from the movie poster, which depicted the Spotlight-ers (Michael Keaton, Mark Ruffalo, Rachel McAdams, et. al.) conferring in a brightly-lit office. The new Bluray art looks like some kind of Robert Ludlum espionage thriller — deep shadows, grim expressions, a sense of tension and maybe danger. McAdams looks anxious; the turtleneck-clad Ruffalo looks like a hard guy in a Jason Bourne film. 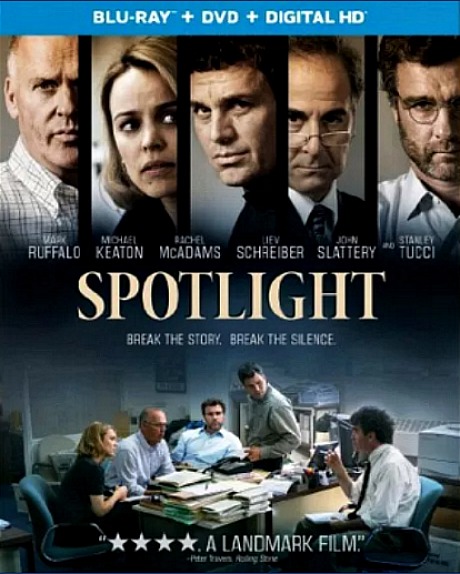 February 8, 2016 3:37 pmby Jeffrey Wells
22 Comments
If Bloomberg Runs As An Independent, Hillary Will Take The Hit

In a 1.8.16 Financial Times interview, ex-New York mayor and serious billionaire Michael Bloomberg has stated for the first time that he’s definitely considering a run for the White House. He didn’t officially declare but he’s obviously edging toward that. Bloomberg said he was “looking at all the options” and that he needs to “start putting his name on ballots across the U.S. at the beginning of March.”

Bloomberg apparently intends to run as an independent. If he does this he’ll be the new Ralph Nader. In a three-way race — Clinton vs. Trump vs. Bloomberg — indications are that Bloomberg will probably draw votes from Clinton. Another option is that he could conceivably run as a Republican with an intention to take the nomination away from Trump, but it that’s the secret plan why did he wait so long? In any event he’s ready to spend $1 billion of his own money to fund the possible campaign. Bloomberg is reportedly worth over $35 billion.

“Bloomberg’s entury would radically affect the election,” the FT story notes. “Many experts believe that Mr. Bloomberg would help the Republican nominee by drawing more support from Democrats over Republicans because of his liberal stance on issues such as gun control and the environment. A poll conducted by Bloomberg’s own news organization and the Des Moines Register ahead of the Iowa caucuses found that only nine per cent of Republicans had a favorable view of him, while 17 per cent of likely Democratic voters in the state ​had a favorable opinion.”

In short, if Bloomberg runs as an independent against Trump and Clinton, the odds of Trump winning would surge.

James Dean was born 85 years ago today — 2.8.31. He died 60 and 1/3 years ago, at age 24. Today a 2009 video interview with the late Dennis Stock, whose photo-taking relationship with Dean was the basis of Life, the Anton Corbijn film with Dane Dehaan and Robert Pattinson, was posted on the N.Y. Times website. The author is documentarian David Snider, who was friendly with Stock.

Snider says Life didn’t capture the truth about Dean and Stock’s relationship. “I felt it wasn’t accurate,” Snider writes. “Although it had that mid-50s look and feel, its creators invented a story about a reluctant actor and an annoying, persistent, acerbic photographer. I thought: ‘No, no, no. That’s not really how it happened.’

“In real life, Dennis was a compelling, intense man with passion and respect for his subjects. Dean understood this, and he was intrigued by the craft of photography, too. In fact, he took pictures of Dennis while they were together.”

Last night I sat through Terrence Malick‘s Knight of Cups (Broad Green, 3.4) at Santa Barbara’s Arlington theatre. I didn’t watch or absorb it — I “sat through” it like I was waiting for an overdue bus.  Knight of Cups flatlines.  It’s about warm climes and lassitude and a truly profound lack of effort by everyone involved, particularly Malick.  What a tragic journey he’s been on since The Tree of Life. Self-wanking, anal-cavity-residing…the man is so lost it looks like home to him. And it is a kind of home, I gather, that producers Sarah Green and Nicholas Gonda have seemingly created for the guy. Take your time, Terry…take your sweet-ass time.

Once regarded as one of Hollywood’s great auteurist kings (Badlands, Days of Heaven) but more recently renowned for his whispery mood-trip films (a tendency that began with The Thin Red Line) and for indulging in meditative reveries to a point that the reveries become the whole effing movie, Malick, free to operate within his own cloistered realm, lives to “paint” and dither and go all doodly-doo and mystical and digressive when the mood strikes, which is apparently all the time when he’s shooting.

40 years ago I was convinced Malick had seen the burning bush and was passing along God’s-eye visions, and now look at him.

Knight of Cups is To The Wonder Goes To Southern California with a lot more dough and a greater variety of hot women. They could re-title it Terrence Malick’s Wide, Wide World of Delectable, Half-Dressed, Model-Thin Fuck Bunnies. They could also retitle it Terrence Malick’s Beaches…boy, does he love going to the beach at magic hour and sloshing barefoot through the tides! This meandering dream-doze movie is all beaches, all deserts, all swanky condos and office towers and absurdly arrogant McMansions. And all half-captured moods and fall-away moments and conversational snippets.

Who am I? Why am I so damn lazy? Can I do anything besides wander around and gaze at stuff? Either Bale is on Percocets or I need to drop a Percocet the next time I watch this.

Yorgos Lanthimos‘ The Lobster (Alchemy, 3.16) is a half-effective parable piece, dryly comedic and lightly romantic at times, that was made to be shown at film festivals and particularly to effete critics like Variety‘s Guy Lodge. It’s darkly pulsing and tingly during the first half, and then it runs out of gas and becomes a drag to sit through. In Cannes I called it “a dryly amusing, Bunuelian parlor piece about societal oppression, singlehood, conformity and totalitarianism.” It’s about a society in which singles are routinely arrested and sent to “The Hotel”, where they have 45 days to pair up with someone. If they fail, they’re transformed into an animal of their choosing and released into “The Woods.” Fundamental question: Who could possibly fail to find a mate under these circumstances? Obviously singles would find someone on at least a pretend basis, if for no other reason than to avoid being turned into a four-legged beast of some kind. I found a place in my head for Dogtooth and I know Lanthimos is a kind of late-Bunuelian, crazy-salad type of guy but The Lobster is whimsical and undeveloped. Costarring Colin Farrell (rockin’ a seriously chunky dad bod), Rachel Weisz, John C. Reilly, Olivia Colman, Ben Whishaw and Lea Seydoux.