Gus Van Sant‘s The Sea of Trees, a morose suicide drama with Matthew McConaughey, Ken Watanabe and Naomi Watts, was spat and shat upon when it played the 2015 Cannes Film Festival. Lionsgate/Roadside has the U.S. distribution rights but they haven’t announced a date — will they ever? The IMDB has it opening in Italy on 4.14 and in Japan on 4.29.

In the view of Variety‘s Justin Chang, Trees is “almost impressive in the way it shifts from dreary two-hander to so-so survival thriller to terminal-illness weepie to M. Night Shyamalan/Nicholas Sparks-level spiritual hokum…this risibly long-winded drama is perhaps above all a profound cultural insult, milking the lush green scenery of Japan’s famous Aokigahara forest for all it’s worth, while giving co-lead Ken Watanabe little to do other than moan in agony, mutter cryptically, and generally try to act as though McConaughey’s every word isn’t boring him (pardon the expression) to death.”

I’ve always adored the guitar work in the Rolling Stones’ Star Star (i.e., Starfucker)…those driving, layered Chuck Berry-like chords…that tasty, licky attitude. But until this morning I’d honestly never read the lyrics, much less contemplated them. I knew they were bawdy but I never gave a shit. I never did the math and wondered if it might be about Mick Jagger‘s relationship with sexual adventuress and “You’re So Vain” writer-singer Carly Simon. (In “Backstage Passes” Angie Bowie wrote that Jagger had been obsessed with Simon.) I’d never really considered the “tricks with fruit” line or that reference to Simon (or whomever the song is about) giving head to Steve McQueen. God knows how or why John Wayne flew into Jagger’s mind.

The first trailer for Glenn Ficarra and John Requa‘s Whiskey Tango Foxtrot (Paramount, 3.4) filled me with dread. It told me that while the film is based on Kim Barker‘s “The Taliban Shuffle,” the intent was to make a Tina Fey movie, and that the themes were therefore as follows: (a) “Quippy Tina needs to be quippy Tina, so wherever she goes her 30 Rock sensibility will always be intact and never modified”, (b) “You’re more attractive in Afghanistan than you are in the States so enjoy the man-meat, girl,” (c) “Girls need to be girls, which means when they need to pee armed soldiers will form a perimeter to make sure the peeing girl is safe,” etc. In other words this is not a Tina-goes-to-Afghanistan movie as much as an Afghanistan-adapts-to-Tina’s-visit film. The second trailer [below] is still on the low and coarse side, but Tina’s character seems a bit less self-absorbed. The initial trailer is after the jump.

35 Comments
None So Blind As Those Who Will Not See

Yesterday a photo emerged from the Chicago Tribune archives of a 21 year old Bernie Sanders being arrested at a civil-rights demonstration in August 1963. A University of Chicago senior at the time, Sanders was being hauled into a police wagon. He was charged with resisting arrest, found guilty and fined $25. The following year 18 year-old Hillary Clinton became a supporter of the presidential campaign of Sen Barry Goldwater, who voted against the Civil Rights Act of ’64 and had vowed to “re-segregate” America. And yet African-American voters stubbornly persist in believing that Hillary is more on their team than Bernie, that she more strongly empathizes, etc. See what I mean about low information voting not being the exclusive province of rural whites? 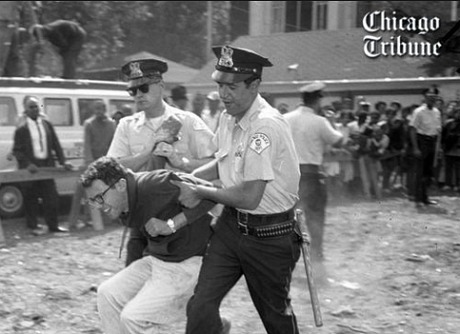 Todd Haynes‘ Carol may have been, for me, the most emotionally affecting relationship film of 2015. I’m not going to rehash all the praise-worthy elements (Cate Blanchett and Rooney Mara‘s fully felt performances, Ed Lachman‘s 16mm cinematography, the early ’50s vibe of repression and propriety). It so perfectly captured, for me, what it feels like to be in love (“I know how it feels to have wings on your heels”). I particularly remember what a high it was to see it in Cannes…everyone was levitating, it seemed. Then I saw it again six months later — in late October, or a month before it opened commercially on 11.20 — at the Middleburg Film Festival. Middleburg is a more conservative town than Los Angeles, of course, but it’s similar to the Academy in that it’s full of wealthy over-50 white people. And the instant Carol finished playing in the main conference room of Middleburg’s Salamander Resort and the lights came up, you could feel the vibe. They “liked” and respected it, but they didn’t love it. The atmosphere was approving and appreciative, but a bit cool. And I said to myself, “Okay, that’s it…not even Christine Vachon dreamed that Carol could win Best Picture Oscar but after Cannes I thought it would probably be Best Picture-nominated because it’s so affecting and classy and poised….now I don’t think that’ll happen.” It went on to win big with critics and industry groups, but older whites never embraced it. They somehow didn’t see themselves in it. (Here’s my 10.24.15 post about Carol‘s Middleburg reception.)

Anne Thompson to Eric Kohn: “The Revenant feels like the kind of movie that represents the Academy the way they want to see themselves…a brave, extraordinarily risky art film…there’s something very pure about Inarritu…he always chases after the same holy grail, some kind of cinematic poetry…his lack of experience with a big budget made him make The Revenant like an indie film…the PGA didn’t give The Revenant [their Daryl F. Zanuck award] because it horrified them….horror and awe.”

If The Revenant is a pain poem
What will Scorsese’s Silence be?
A religious persecution agony poem?