Variety and other publications are reporting that Donald Trump really does get infected with AIDS at the very end of The Brothers Grimsby (Sony, 3.11). Brent Lang‘s Variety piece, posted two or three hours ago, says that the Trump AIDS-infection sequence “occurs during the film’s end credits and has received a raucous response from European audiences.”

Not that raucous, it would seem. Louis Letterier‘s film opened in England on 2.24 so why is this Trump story breaking only just now? Leslie Felperin’s 2.22 Hollywood Reporter review doesn’t mention it. Mark Kermode‘s 2.28 Observer review mentions “a supremely unfunny, endlessly repeated riff [about] HIV-infected blood,” but not the Trump connection.

Lang notes that while Sony has “included a disclaimer that explicitly states Trump wasn’t involved in the movie”, a Huffington Post story by Ryan Grim is claiming that the studio “pressured Baron Cohen to remove the scene over fears that the litigious Trump will sue the company.”

Lang quotes Sony spokesperson Jean Guerin denying that pressure was being placed on Baron Cohen to make cuts. “The report of a dispute with the filmmaker is absolutely ridiculous,” said Guerin. “We are 100 percent supportive of the filmmaker and the film.”

In a 3.1 HE piece about black-focused or racial-themed 2016 films (“Don’t Expect A More Diverse Oscars Next Year“), I forgot to mention Amma Asante‘s A United Kingdom, a 1940s period drama about a controversial interracial marriage between Prince Seretse Khama of Botswana (David Oyelowo) and a white woman from London, Ruth Williams (Rosamund Pike).

Which means, of course, that later this year we’ll be grappling with duelling interracial-marriage period dramas — Kingdom and Jeff Nichols‘ Loving, a late ’50s drama about an interracial union that briefly resulted in Mildred and Richard Loving (Ruth Negga, Joel Edgerton) being sentenced to prison in Virginia. Both films are partly British-produced.

There are three other racially significant films due later this year — Nate Parker‘s The Birth of a Nation, Gary Ross‘s The Free State of Jones and Barry Jenkins‘ Moonlight.

David Gordon Green and Jake Gyllenhaal‘s Stronger, a Boston bombing drama about a guy who lost his legs in the Boylston Street blast but put himself back together, won’t be a 2016 award-season contender. I knew it wouldn’t shoot until the early spring, but a chat with Gyllenhaal about this project a few months ago indicated there was an interest on the part of Lionsgate, the distributor, in releasing it before year’s end. Now a Jeff Sneider Wrap piece reports that it’ll most likely be a 2017 film. But another Lionsgate-distributed Boston bombing drama is stepping into the breach. Sneider is reporting that Peter Berg and Mark Wahlberg‘s Patriot’s Day, a crime-and-capture drama about cops tracking down the Boston bombers (Tamerlan and Dzhokhar Tsarnaev), will open on 12.21.16 before going wide in early ’17. But you want to be a little careful here. Berg and Wahlberg, who teamed on Lone Survivor, are invested in the mythology of plain-spoken, unpretentious working-class guys standing up and fighting the enemy and doing the right thing, etc. I’m sensing a certain formulaic inclination but let’s see what happens. If the Berg-Wahlberg project focuses on the Tsarnev brothers as much as the good-guy cops, maybe. 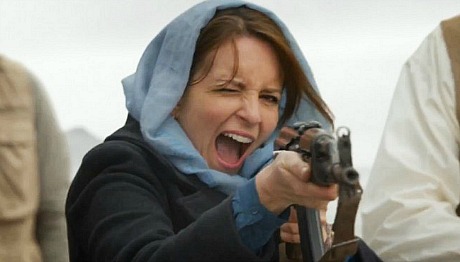 Paul Feig‘s Ghostbusters reboot (Sony, 7.15) is obviously low and coarse. Aimed at families. Cartoon-level ghosts rendered with intentionally shitty CGI. Bill Murray‘s material aside, I hated the original Ghostbusters from the get-go. I despised screenwriters Dan Aykroyd and Harold Ramis for refusing to dream up a reason why ghosts were suddenly swirling all over Manhattan…why? Two years earlier ghosts had attacked Craig T. Nelson and Jobeth Williams‘ home in Poltergeist, but that had something to do with their home having been built upon a Native American burial ground. (Right?)

In a statement to the Guardian‘s Catherine Shoard, Revenant/Birdman director Alejandro G. Inarritu has defended what some have regarded as a seemingly snooty or disdainful reaction to Mad Max costume design Oscar winner Jenny Beavan during last Sunday’s Oscar awards.

“I think Jenny Beavan is a masterful costume designer and very deserving of the Oscar for Mad Max: Fury Road,” Inarritu says. “By editing and omitting the full reality and suggesting I felt anything but admiration is mean-spirited and false. What you don’t see in the 10-second clip being circulated is my applause for Jenny as she ascended the stairs to the stage.”

Inarritu added: “I’ve learned a lot this awards season…that I should never cross my arms when I am sitting down.”

It wasn’t just Alejandro, of course — Revenant/Spotlight producer Steve Golin and Revenant costar Tom Hardy also appeared to express less-than-respectful reactions to Beavan as she walked past them. Spotlight director-writer Tom McCarthy grinned as he put his hand to his mouth — something between slight disbelief and “oh, wow.”

It seems clear to me that all these guys were thinking the following as they heard Beaven’s name being announced and then caught their first glimpse as she walked down the aisle: (a) “I don’t know Jenny Beavan but whatever…fine,” (b) “Wait…that‘s Jenny Beavan? Where’s the stunning designer gown? She’s short and older and has gray brillo hair! Is this a possible impostor or maybe a friend of Beaven’s accepting in her absence? I think I’ll wait and see what develops”; (c) “Oh, that really is the winner of the Best Costume Design Oscar!” and (d) “Okay, I’ll clap then….better later than never!”