Total agreement with Collider‘s Matt Goldberg: the Avatar sequels have “become their own punchline,” and the brand has “fizzled” since ’09 (a full six and 1/3 years ago, remember). I’m not saying interest is dead but who do you personally know who has said repeatedly that they can’t wait to go back to Avatar-land? I’m asking.

I would’ve been down with a sequel if it had happened by, say, ’13 or ’14, and maybe even a third installment next year or even in ’18 to cap things off. But no way am I interested in seeing four (4) sequels, which James Cameron announced today at Cinemacon. Four sequels over a five-year period, he said. 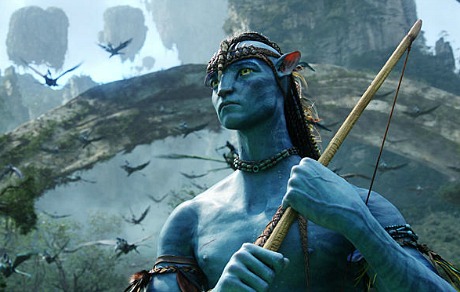 We all know Cameron is a grade-A, full-metal-jacket filmmaker and that he’s never been one to shovel second-tier “product” just to make dough, but four sequels…c’mon! That’s nothing but frenzied corporate greed. “Four sequels” isn’t a punchline — it’s a satire of the sequel mentality, of absurd corporatism, of a gifted filmmaker who gone over the falls.

Let’s count off the four Steven Spielberg–Mark Rylance hook-ups, which seem to be a result of some kind of fetish on Spielberg’s part as he’s obviously doing the hiring. The first, of course, was Bridge of Spies, a period drama for which Rylance won a Best Supporting Actor Oscar for his portrayal of real-life Russian spy Rudolf Abel. Next came Spielberg’s The BFG, a fantasy-adventure in which Rylance plays the titular lead character (i.e., Big Fucking Giant), and which will debut at next month’s Cannes Film Festival before opening stateside on 7.1. Next is The Kidnapping of Edgardo Mortara, which Spielberg will begin directing early next year with Rylance portraying Pope Pius IX, a supporting role. After that comes Spielberg’s Ready Player One, in which Rylance will portray the creator of a virtual world, Oasis, whose death propels the plot. Spielberg will direct and produce the film for release in March 2018.

The best-known fetish collaboration of the 21st Century was the one between Leonardo DiCaprio and Martin Scorsese, but Spielberg-Rylance is clearly nipping at their heels. I for one felt fully sated by Spielberg-Rylance after Bridge of Spies. I saw it and said to myself “Okay, that was fine but Rylance and Spielberg can go their separate ways now…best of luck, guys!” Nope.

20th Century Fox’s presentation of trailers and product reels happened this morning at Cinemacon in Las Vegas. The same trailers will be screened for press next week on the Fox lot. The films being promoted are Ice Age: Collision Course (family animation), X-Men: Apocalypse (superhero sausage), Mike and Dave Need Wedding Dates (dingbat hormonal romcom), Independence Day: Resurgence (alien invasion sequel), Trolls (family animation), Assassin’s Creed (videogame-inspired actioner), Why Him? (romcom), Nate Parker‘s The Birth of a Nation (historical saga with spiritual sheen) and Tim Burton‘s Miss Peregrine’s Home of Peculiar Children (imaginative fantasy). With the exception of the Parker and Burton films, all are aimed at unrefined types (families, Joe Popcorn-ers, hormonal idiots). Fox is a big outfit, and it needs to bring in a lot of dough. Films made for people like me (i.e., Kenneth Lonergan‘s Manchester By The Sea) haven’t fit into their financial payoff schemes for a long while now. This is the way the big studios are these days. Remove the educated elites and you’re left with a culture that has largely begun to sink into the swamp. To stay alive Fox has to attract the sloths and submentals.

The fashion-realm hottie factor in Nicholas Winding Refn‘s The Neon Demon (Amazon, presumably June or July) is unmistakable and not unwelcome, and as misleading or deceptive as trailers often are this doesn’t look quite as unhinged as I thought it might be, given the grotesque excesses of Refn’s Only God Forgives. The bleachy white light is agreeable for some reason.

AMC CEO Adam Aaron has upset a lot of people this morning with the posting of some liberal remarks he made yesterday about in-theatre texting. The quotes were part of a Cinemacon Variety interview with cyborg reporter Brent Lang. Aaron didn’t say that AMC will allow texting in all theatres, but that AMC might designate some theatres within a given plex as text-friendly. Another option, he allowed, might be to allow texting in the rear of some theatres. 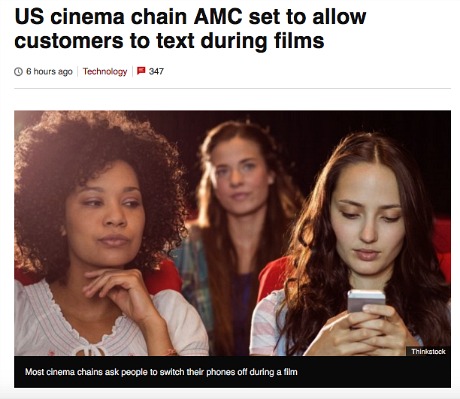 HE’s view is that people who text in theatres should be beaten, spat upon, soaked with soft drink splashings and then turned over to ISIS for further discipline after the film has ended. But if texting must be allowed, I don’t have a problem if it happens only within, say, the last six or eight rows of a theatre. As long as those bright little screens aren’t glowing within my sight lines, fine.

And I guess it wouldn’t be super-terrible to allow total texting in certain designated theatres. I’ll just avoid those theatres if and when I pay to see a film, which happens from time to time.

Here’s the offending passage from the Lang/Aaron interview:

Lang: “Would appealing to millennials involve allowing texting or cellphone use?”

“At the same time, though, we’re going to have to figure out a way to do it that doesn’t disturb today’s audiences. There’s a reason there are ads up there saying turn off your phone, because today’s moviegoer doesn’t want somebody sitting next to them texting or having their phone on.”

I didn’t stay up until 3 am to file my reactions to the announcement of the 2016 Cannes Film Festival slate because (a) I was presuming that no wowser surprises would be included (this has turned out to be correct) and (b) there’s an apparent downside factor attached to…well, a good percentage of the films announced this morning. I’m not exactly “blue” in the Billie Holiday sense, but the Cannes turn-on factor is down this year. When the stars are aligned above the right kind of Cannes slate I’ll feel an 8 or an 8.5 warm gutty-wut in my soul. My bones and inner organs tend to vibrate. This one feels like a 6 or a 6.5. Okay, a 7.

Agreed, none of the announced films are radiating “please, God…no!” vibes except for the out-of-competition slot given to Steven Spielberg‘s The BFG, but very few seem (emphasis on the “s” word) to possess that special X-factor anticipation tingle-vibe that you can always somehow sense from a distance. And so my insides aren’t humming. The little pleasure light that hangs near the bow of my Cannes-bound ship won’t illuminate no matter how many times I unscrew and re-screw the bulb.

This is a good attitude to have, by the way, because when and if something really pops I’ll be all the more startled and thankful.

At least there’s (a) Baccalaureat, the competition film from Romania’s Cristian Mungiu, who can do no wrong in my eyes; (b) Cristi Puiu‘s Sierra-Nevada, about a demimonde of prickly Romanian family members who’ve assembled to raise a glass for a deceased patriarch; and (c) Julieta, about a character played in younger-older stages of her life by Adriana Ugarte and Emma Suarez, from the almost entirely faultless Pedro Almodovar. (If anyone can tell me why Pedro made I’m So Excited, I’m all ears.)

I’d like to express my deep, heartfelt gratitude to Thierry Fremaux or God or fate for the wonderful, glorious absence of Terrence Malick‘s Voyage of Time, the IMAX film that Mr. Wackadoodle has been fiddling with for the last four or five years, and which had been mentioned here and there as a possible out-of-competition inclusion.

Woody Allen‘s Cafe Society will open the festival, but opening-nighters are often chosen because they’re relatively mild or unchallenging or even toothless. Do the math.

Director Andrea Arnold seemed to have some kind of lightning in her bottle when she made Red Road and Fish Tank but American Honey, described as a portrait of “a group of young people who travel the country selling magazine subscriptions and making trouble,” sounds fucking dreadful. Magazine subscriptions? Sasha Lane, Shia LaBeouf and Riley Keough costar. (Competition)

I’m enormously grateful, by the way, that Derek Cianfrance‘s The Light Between the Oceans wasn’t chosen. The prospect of watching Fassbender-Vikander engaging in a form of delusional child-rearing on an isolated island…forget it, leave it there. And thank our Almighty and Merciful God that James Gray‘s The Lost City of Z wasn’t chosen for whatever reason.