Support on Patreon Follow @wellshwood
22 Comments
Just To Be Clear

It’s definitely called Allied, and being a Robert Zemeckis film you know it’ll be a little on the schmaltzy…okay, the emotionally accessible side. The World War II-era film began shooting last month in England. Paramount will definitely open it commercially on 11.23.16, which is only about seven months from now. El Bradamente plays Max Vatan, an assassin who falls in love with and then marries Marianne Beausejour (Marion Cotillard) as they prepare to zotz a German official. And they obviously have a kid. Steven Knight‘s screenplay is apparently based on a true story. The fact that it’s being called a “romantic thriller” indicates that neither Pitt nor Cotillard will die. (Whereas if it was being called a romantic drama or melodrama we could expect one or both of them to get shot by a German firing squad.) The main costars are Lizzy Caplan (as Pitt’s/Vatan’s sister) and Jared Harris. 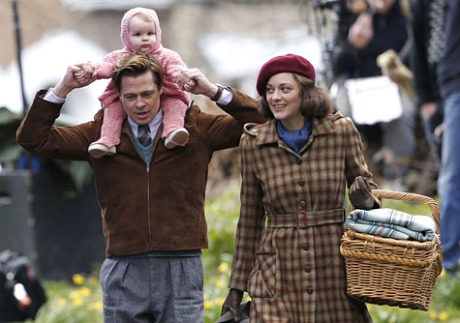 Jason Bateman‘s The Family Fang (Starz, 4.29) is a fine, straight-dealing dramedy — mature, plain, unforced. It’s about a 40ish brother and sister (Bateman, Nicole Kidman) coping in different ways with a certain degree of emotional damage caused by their eccentric parents (Christopher Walken, Maryann Plunkett). The movie basically says to all kids who’ve had bruising parents, “Tough break but this is now, and you have to decide if you’re going to stand up and call your own shots…or not.” It doesn’t make a stupid joke out of the situation. And I admired Bateman’s decision to keep the the tone measured and low-key and not inject comic schtick, which nine out of ten directors would have resorted to.

The Family Fang compelled me to make a list of the worst cinematic parents of all time, and right away I thought of my top five: John Huston‘s Noah Cross from Chinatown, Daniel Day Lewis‘s Daniel Plainview from There Will Be Blood, Walken’s Brad Whitewood from At Close Range, Faye Dunaway‘s Joan Crawford in Mommmie Dearest and Marion Lorne‘s Mrs. Antony (mother of Robert Walker‘s Bruno) in Alfred Hitchcock‘s Strangers on a Train.

Every night I try to get seven hours of slumber, but it never seems to happen. Arianna Huffington says I should bag at least eight hours, but a little man in my head has always resisted that. At best I manage five and a half to six hours plus 30 to 45 minutes of pre-sleep tweeting plus an hour of lying around and checking tweets the next morning. I’ll sometimes try and grab a nap between 4:30 and 6 pm, but that doesn’t seem to help much. The bottom line is that with sleep constantly tugging at my sleeve it’s easy to slip under at a moment’s notice.

Yesterday afternoon I pulled into a CVS parking garage at the northeast corner of La Cienega and Santa Monica Blvd. In a car, I mean. I eased into a spot and sat there for a bit as I finished listening to a song. I closed my eyes and 20 minutes later I woke up, still in the sitting position, iTunes music still playing, the engine still running. “Holy shit,” I said to myself. The next time I feel a fatigue thing approaching as I’m driving, I’ll just pull over and park and catch 40 winks.

There’s nothing wrong with remaking THX-1138. If I were George Lucas I’d feel honored and flattered. Sterile, robotic society without feeling or physical intimacy. Emotions outlawed, everyone wearing same white tunics. Nicholas Hoult and Kristen Stewart fall in love anyway, eventually have to run for it, etc. Executive produced by Ridley Scott, Equals is screening this week at the Tribeca Film Festival. popping on DirecTV on 5.26, following by select theatrical and VOD on 7.15.

On 3.2.16 L.A. Times reporter/analyst Glenn Whipp posted a piece about ten possible Best Picture nominees for 2016. I’ve got my own list of suspects but let’s first consider the Whipp roster plus another posted on 3.7 at Awards Watch.

Forget Pedro Almodovar‘s Julieta, as that will feed right into the Best Foreign Language Feature category. And the last of Whipp’s picks — Barry Jenkins‘ Moonlight — sound a bit too fringey and druggy and Jean Genet-ish for the Best Picture derby.