Park Chan-wook, the South Korean Brian DePalma, strikes again with The Handmaiden, a competition entry at the 2016 Cannes Film Festival. Everything in the trailer has that extra-mad-sauce quality — underlined, emphasized, drilled. The source is Sarah Waters‘ “Fingersmith“, a 2002 historical crime novel set in Victorian-era England. The newbie is set in 1930s colonial Korea. It costars Ha Jung-woo, Kim Min-hee, Cho Jin-woong and Kim Tae-ri.

Vanity Fair has essentially become a well-written women’s magazine. Okay, for women, gays, metrosexuals and frillies. And, I regret to say, for people like me. I can’t fully let it go, but on the other hand a magazine that seems to be about fashion, style and attitude first and then whatever else fits, is anathema to me. So I’ve been making an effort over the last year or so to wean myself off it, but…but! I sometimes find it hard to resist the covers. This month I’m going to experiment by not buying the Amy Schumer issue and see how it goes. It wasn’t Schumer but the appearance of another Jackie Kennedy article that tore it. Okay, I’ll be flying between now and June 1st so maybe not, but next month for sure. 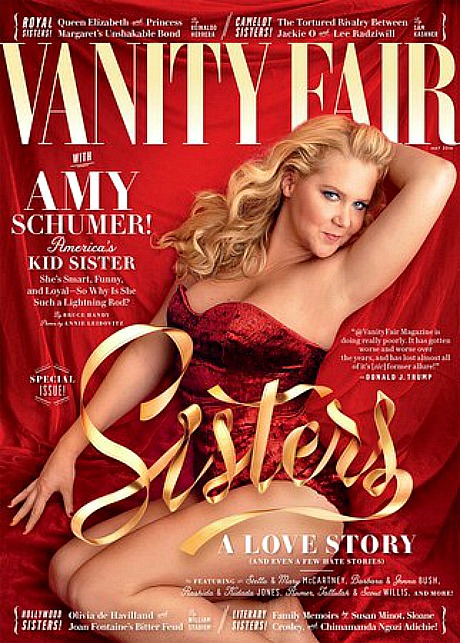 Posted on 10.8.15: “I’ve been buying Vanity Fair for 30 years now. I can’t precisely pinpoint when I stopped reading it, but sometime within the last couple of years. The articles have begun to seem a little less substantial with more of an emphasis on girly, frothy, fashiony stuff. Or people I can’t stand to look at. I know that I hate the all-fashion issue. Anything that tries celebrate or instill a fascination with wealth and fashion and loaded people who are spending their money on increasingly peculiar or arcane things gets a down vote.”

In the first Telluride spitball piece of 2016, Variety‘s Kris Tapley muses about which films might show up at that elite, four-day Colorado gathering, which is only 17 or 18 weeks off.

Tapley rightly acknowledges that it’s too early to predict, but writes the following: “Sundance films rarely play Telluride due to the festival’s North American premiere restriction, it might be difficult for the fest to pass up Nate Parker’s The Birth of a Nation, particularly given Fox Searchlight’s commitment to a presence there in recent years.”

I’ll go along with that, but I would add another exciting Sundance premiere — Amazon/Roadside’s Manchester by the Sea.

Chris Pratt on Passengers: “And due to some malfunctions in the hibernation pod, we both wake up.” Oh, yeah? Either Pratt, a good soldier, is repeating the company line, or Jon Spaihts‘ script was rewritten before shooting began. I can roll with either scenario.

April 25, 2016 10:43 amby Jeffrey Wells
10 Comments
How Indifferent Will Cannes Jury Be To What Everyone Else Thinks?

Cannes juries have made perplexing calls at the conclusion of the last two festivals (’15 and ’14), and so the question is whether or not this year’s jury will prove to be as indifferent or hostile to consensus favorites as before. Someone noted last year that juries have lately tended to vote against the film with the greatest heat as they don’t want to seem too populist or accomodating.

The 2014 jury (led by Jane Campion) prompted widespread forehead-slapping when they gave Nuri Bilge Ceylan‘s Winter Sleep, a highly respectable character study, the Palme d’Or when Andrey Zvyagintsev‘s Leviathan was the clear favorite of the cognoscenti. And the decision by last year’s jury (the one headed by the Coen brothers) to hand the Palme d’Or to Jacques Audiard‘s entirely decent Dheepan resulted in some consternation as most know-it-alls felt that Son of Saul or Carol should have won.

I’m cynically presuming that this year’s jury will probably follow suit by confusing or pissing people off about one or more of their award decisions.