I’ve tried to research this Secret deodorant ad to see who the actress is. I’m risking sounding like a clueless idiot, I realize, but I honestly don’t know her. Should I? She’s maybe…what, 23 or 24, but she’s got it — alert, foxy, seemingly smart, guarded but open, vulnerable. Right away I said to myself “who’s that?” If she were one of the Ghostbusters costars, I wouldn’t hate it as much going in. Whatever she does next, she needs to keep the glasses on. Update: Her name is Emily Labowe. (Thanks to HE reader Jesse Crall.)

I skimmed through a draft of Mike Rosolio‘s Reagan last December, and liked it a lot. So did Will Ferrell, who is now attached to play Ronald Reagan in a film version that Ferrell will co-produce with Gary Sanchez Prods. If and when it gets made with a decent director in charge (no helmer is currently attached), Reagan could turn out to be Ferrell’s most substantive film ever. Which is a low bar, I agree, but still.

The conventional description is that it’s basically about a dementia-afflicted Reagan during his second term. (The script begins in September ’84 and ends after the 40th President has left office in ’89.) Reagan is out to lunch a good half the time, but finds a new confidence and clarity of purpose when an intern named Frank persuades the former actor that he’s playing the part of a U.S. president.

Reagan climaxes with the Iran-Contra scandal, which resulted in Reagan more or less admitting on TV that he didn’t remember approving the scheme.

The point or payoff of Reagan is that all U.S. Presidents are totems, players of roles, figureheads, and that the guys who really run the show are the permanent, behind-the-scenes players. In Dr. Strangelove General Jack D. Ripper declared that “war is too important to be left to politicians.” There’s a similar view espoused in Reagan: Democracy is too important to be left in the hands of the public.

Ted Cruz is finished and he knows it. In the wake of Donald Trump‘s sweep of Maryland, Delaware, Pennsylvania, Connecticut and Rhode Island, the Republican “shit show” convention in Cleveland just isn’t going to happen. Which is why it seems more than a little humiliating for Carly Forina to have accepted Cruz’s invitation to become his running mate for the Republican presidential nomination. I’d have politely declined if I were in her shoes. They have nowhere to go but down. But I guess Fiorina figured she could get some kind of psychic boost from the attention, something that would help down the road.

No Comments
Hemingway in Hell

“Papa: Hemingway in Cuba holds the distinction of being the first Hollywood production to shoot on the island of Cuba since 1959. But other filmmakers looking to leave their mark need not fret, as there’s still an opportunity to make the first American film shot there since Fidel Castro came to power that isn’t a complete, mortifying embarrassment.” — from Jordan Hoffman‘s 4.27 Guardian review.

“Adrian Sparks, despite his undeniable physical resemblance, never quite projects the necessary charisma for his larger-than-life character. When his Hemingway lurches for his gun in a desperate suicide attempt, you don’t particularly want to stop him.” — from Frank Scheck‘s Hollywood Reporter review.

“Listen to Papa on YouTube clips. Short sentences delivered in a clipped bark. But Sparks doesn’t spark. Hemingway was an old 59 at a time long before 59 was the new 45. But this guy looks ancient. And sorry to be cruel, but he has all the screen presence of a third runnerup in a Key West Hemingway look-alike contest.” — Movie Nation‘s Roger Moore.

Robert Downey to Iron Man/Marvel fans: We’re all whores drinking at the Marvel trough. I can’t resist those Marvel paydays and you can’t resist paying to see me and the rest of the Marvel gang going through the same old motions over and over. Are we providing better product than the D.C. crew at this stage? You bet we are. Am I fool enough to say no to becoming that much richer for playing Tony Stark for the fourth fucking time in a stand-alone? Nope. Is there a snowball’s chance in hell that you, the fans, won’t flock to see Ironman 4, no matter how good or bad it is? No way. And while we’re on the topic, how about another Sherlock Holmes flick? The question is how much and for how many more years can I continue to franchise myself out? Will I ever do a Tropic Thunder or a Zodiac ever again, or am I just a ka-ching machine? You guys are the key. Or, you know, you need to tell me “when.” Because I can’t stop. 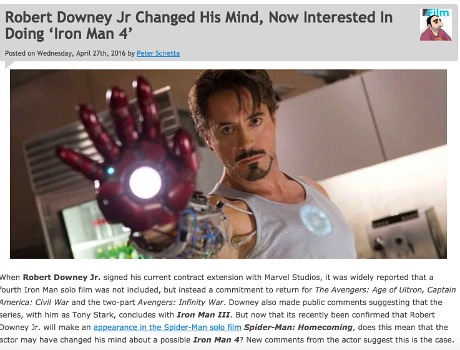 Mel Gibson‘s Hacksaw Ridge, a patriotic war film that recalls Howard Hawks‘ Sergeant York, is being research-screened this evening in Sherman Oaks. Pic is based on the saga of U.S. Army medic Desmond T. Doss (Andrew Garfield), a conscientious objector who earned the Medal of Honor for single-handedly saving the lives of over 75 soldiers during the Battle of Okinawa in 1945. Hawks film was about Alvin C. York, a Tennessee native whose 1917 application for conscientious objector status was denied. During a World War I battle in France York was given the Medal of Honor for capturing 32 machine guns, killing at least 20 German soldiers and capturing 132 others.

Despite the presumed jingoistic content of Hacksaw Ridge I’d rather see this in Cannes than Mel’s badass-dad-vs.-Latino-gangbanger flick, Blood Father. The action-thriller, directed by Jean-Francois Richet, will screen as a midnight attraction. The trailer indicates that it’s pure exploitation.

My initial response to this ugly-tweet video was to dismiss it. A friend who sent it to me said it’s “kind of amazing that people write tweets like this.” Amazing? Cro-magnon sports fans? “I’m wondering about the real value of the invention of Twitter as a more efficient way to be evil,” she added. “I have next to nothing in common with the life forms who wrote these tweets,” I said. “They’re sports guys — a different species.” She replied, “Okay, but I know you’ve expressed how horrible and upsetting the tweets are that are sent to you and I thought you’d really appreciate what these women sports writers have to put up with.” Okay.

A smattering of derisive tweets has greeted the trailer for Oliver Stone‘s Snowden (Open Road, 9.16). Some were snickering about Joseph Gordon Levitt‘s guttural speech (which reminded critic Sam Adams of Ted Levine‘s Jame Gumb in Silence of the Lambs), and some were thrown or amused by the appearance of Nicolas Cage in a supporting role.

But the main beef (certainly among the smart set) seems to be “who needs another Snowden movie in the wake of Laura Poitras‘s Citizen Four?” The Snowden/Open Road response is that (a) 90% of your popcorn-munchers have never even heard of, much less seen, Citizen Four, and (b) Snowden’s real-life saga transformed into a feature narrative = a Bourne movie without the fights, guns or car chases.

I don’t feel snarky about Stone’s film. Yes, the trailer suggests that Stone is using the usual devices to jack up the threat levels, but I’m half-persuaded that it might be a reasonably engaging thing. I too was taken aback by Cage popping up, and I didn’t even recognize Shailene Woodley, who plays Snowden’s girlfriend. And a brief snip of JGL staring at a computer eye while having sex with Woodley seems like a wrong call. I don’t want to think about Ed Snowden having sex with anyone, ever.

The real problem, I suspect, is not that some people are still critical of (or indifferent to) Snowden’s NSA whistleblowing, but that they really are okay with giving up their digital privacy in exchange for protection from Islamic bad guys. I’m not sure that the liberal media understands the degree to which Average Joes have decided “fuck those guys” when it comes to Islam. The common-man animus is probably equal to general feelings about the Japanese-Americans in the wake of Pearl Harbor, if not stronger. This is partly what the Trump vote is about.