Support on Patreon Follow @wellshwood
5 Comments
Even Without Subtitles…

You can tell Cristian Mungiu‘s Graduation (i.e., Bacalaureat) is made of strong, jolting stuff. To his everlasting and glorious credit, Mungiu is not Zack Snyder. When disturbing or traumatic things happen in his films (such as in Beyond The Hills) he never slams them into your face. He captures incidents from a distance, in the corners of frames, sudden and unforeseen. Consider what seems to be happening in this trailer at 1:10 and 1:34. Pic has been described as “a powerful and universal study about the imprecision of parenthood, the relativity of truth and the ambiguity of compromise, revealed by a father-daughter relationship.” The Romanian drama will soon play in competition in Cannes.

Hollywood Elsewhere approves of Jason Bateman‘s The Family Fang (Starz, 4.29). So does everyone else for the most part. But I have a very slight issue with Nicole Kidman‘s film-set boob scene, and more particularly the fact that she doesn’t flash. Not that I care one way or the other, but what’s the big deal about topless these days? Nobody cares. It’s one thing if biology has taken you down a peg or two but if you have a relatively nice rack where’s the harm? Why even do a boob scene in 2016 if you’re going to shoot it like Clive Donner shot Paula Prentiss in What’s New Pussycat (’65)? Julie Andrews flashed in Blake Edward‘s S.O.B. 34 years ago. If you’d rather not go there, fine, but if that’s the attitude why not shoot another kind of film-set scene that explores or reveals Nicole’s actress character?

When I think of Captain America: Civil War (Disney, 5.3), which I reviewed a couple of weeks ago, I recall three things: (1) how I began to feel numbed and debilitated around the 100-minute mark (i.e., right after the Berlin airport brawl), (2) how much I loathed hanging with corporate Marvel whore Robert Downey, and (3) the only superhero character who really got my attention was Chadwick Boseman‘s Black Panther, if no other reason than the fact that he’s the new guy. All that stands out are the steel claws but I remember thinking, “Okay, he’s cool, nice outfit, whatever.”

You can tell Justin Chadwick‘s Tulip Fever (Weinstein Co., 7.15) is a carefully honed, well-crafted thing. The cinematography by Eigl Bryld (In Bruges) is obviously handsome; ditto the production design. It’s probably safe to assume that the screenplay by Tom Stoppard, based on a book by Deborah Moggach, will have a certain rhyme. But it has Christoph Waltz once again playing a cuckold with a much younger wife. His last outing in this realm was in Water for Elephants, in which Reese Witherspoon cheated on him with Robert Pattinson. This time it’s Alicia Vikander having it off with pint-sized portrait artist Dane DeHaan (who replaced the much brawnier Matthias Schoenaerts). The Dutch locale and the portrait painting also recall The Girl With a Pearl Earring. Not to mention those ridiculous 17th Century collars that Waltz has to wear. Fairly or not, it just feels like recycled material.

I was going to catch a 2:30 showing of Sir Carol Reed‘s Trapeze (’56) at the TCM Old Tourists Watching Old Films Festival, which kicked off last night. I saw part of this 1956 film on TV decades ago but never all the way through. But Bosley Crowther’s review gave me pause — “dismally obvious and monotonous story…you never saw so much rehearsing or heard so much dull and hackneyed talk.” And then I ran this brief highlights reel and said to myself, “Okay, that’s fine, but don’t blow an afternoon over this.” One arresting shot: Burt Lancaster (who performed some of his own stunts) falling from a trapeze and bouncing off the net and onto the ground. 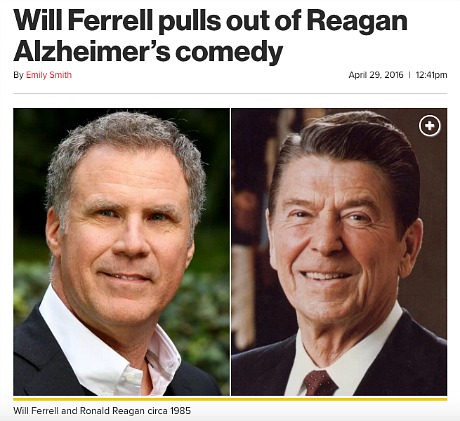 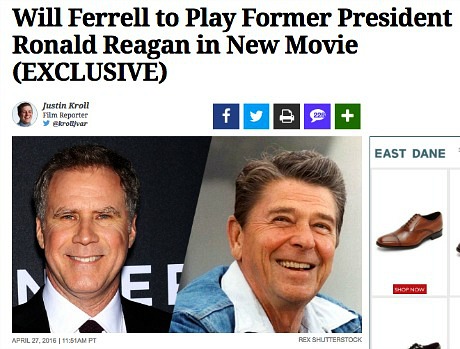 As previously noted, Marshall’s last decent concoction was 1999’s Runaway Bride and his last two, Valentine’s Day and New Year’s Eve, were groaners. So it wasn’t a tough call when I decided a couple of weeks ago blow off a Mother’s Day all-media screening in order to catch a 70mm screening of Patton on the Fox lot. Patton looked okay but a little bit dupey — that “stunning density and sharpness of 70mm” thing didn’t manifest. But I still think I made the right decision.

In for a penny, in for a pound. Embrace, flaunt, proclaim. The tanking of Quentin Tarantino‘s Grindhouse notwithstanding. There’s a suggestion (ignored in this corner) that The Nice Guys, is going to incorporate a scratchy-faded-blurpy aesthetic start to finish. Not that I’m hoping or expecting to be underwhelmed, but if it doesn’t deliver something richer than what’s being conveyed here, etc. Note: If I was lord and dictator of The Nice Guys, I wouldn’t allow face-punching. Creative challenge!