A 6.19 N.Y. Times story reports that the most appealing vp candidate to potentially run with Hillary Clinton — Elizabeth Warren — is “unlikely,” presumably because male hinterland voters would recoil at the idea of a granny ticket. Amy Chozick and Thomas Kaplan‘s story also mentions New Jersey Sen. Cory Booker and HUD Secretary Juan Castro, whom I would be okay with. But other candidates — Colorado Senator Michael Bennet, Secretary of Labor Thomas E. Perez, California Representative Xavier Becerra and Virginia Senators Tim Kaine and Mark Warner — sound dreary as fuck. My money’s on Booker — balls, a skilled orator, the requisite fire in the blood.

It’s only mid-June and I know very little for sure, but 2016 is seeming more and more like a relatively weak year for Best Picture contenders. The more I hear, the more I talk things over, the more I sniff the room, the less intrigued I feel. Gut feelings, insect vibrations, hairs on the back of my neck. A guy who’s seen some of the fall films told me the other day, “I hope things get better.”

I’m sounding like a broken record, I realize, but there appear to be six or seven hotties at best — Kenneth Lonergan’s Manchester by the Sea (I’ve seen it — a sad near-masterpiece), Martin Scorsese‘s Silence (maybe, maybe not — allegedly a difficult sit in terms of gruesome subject matter but who knows?), Ang Lee‘s Billy Lynn’s Long Halftime Walk (maybe — a modern-day Catch-22), Nate Parker‘s The Birth of a Nation (probably but troubles await), Denzel Washington‘s Fences (based on a respected play but much of it is set indoors in a single home — probably more of a Viola Davis-for-Best Actress opportunity than anything else), and Jeff Nichols‘ Loving (a good film but more of a ground-rule double than a triple or a homer — Ruth Negga vs. Viola Davis for Best Actress trophy?) and Clint Eastwood‘s Sully (maybe, seems thin).

I’m sensing different kinds of weakness (uncertainties, vulnerabilities, head-scratchings) from all of these except for Manchester by the Sea, Fences, Silence and Billy Lynn’s Long Halftime Walk, and even these four might run into problems down the road.

I should just shut up and wait for the fall festivals, but I have a special long-throw ability to detect little tingly vibes from certain films, and so far I’m not sensing the possible presence of serious electricity or extra-ness in the wings except for Manchester, which I know has serious heft.

Tarzan can’t part his hair with a comb. It’s not right. I haven’t seen David Yates‘ The Legend of Tarzan (Warner Bros., 7.1), but Edgar Rice Burroughs‘ Tarzan was born to a British Lord, right? I know he was referred to in Hugh Hudson‘s Greystoke (’84) as John Clayton. So I get why he’d part his hair if he’s back in England. But not in the jungle, for God’s sake. From a guy who’s seen it: “Tarzan’s hair is parted because the movie starts with him already domesticated and living in London with Jane when he returns to Africa for a diplomatic mission, and this turns into a jungle adventure. The movie is atrocious, by the way.” 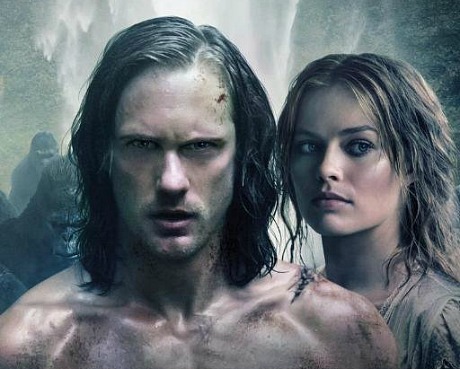 I didn’t see Alice Winocour‘s Disorder (a.k.a. Maryland) at last year’s Cannes Film Festival, but it sounds a bit like Mick Jackson‘s The Bodyguard. One thing that Kevin Costner dealt with when that 1992 film came out was that he shouldn’t have worn a Steve McQueen crewcut. Same thing there — Matthias Schoenaerts looks like hell with tennis-ball hair.

Anton Yelchin is dead at 27 from a bizarre miscalculation, a freak accident. The poor guy was found early this morning, pinned between his car and a brick mailbox on a downslope driveway at his Studio City home. The car was reportedly in neutral and still running when he was found.

“It appears he had exited his car and was behind it when the vehicle rolled down a steep driveway,” the LAPD said in a statement.

Yelchin was a gifted actor, but his boyish looks, thin frame and refined demeanor led to his playing a certain type of guy over and over — i.e., the bright, sensitive, somewhat tortured puppy dog. That was his brand, his handle. When you wanted that thing, you went to Yelchin.

36 Comments
O.J. Made in America Marathon

I’ve seen Episodes #1 and #5 of Ezra Edelman‘s obviously first-rate O.J.: Made in America. So far it feels like one of the most brilliantly crafted murder-mysteries ever made (doc, narrative, whatever) and one of the most penetrating explorations of our late 20th century racial dichotomy, ever. And a psychodrama about a self-destructive Othello complex second to none.  8:45 pm update:  I’ve seen it all; watched episode #5 a second time. What a sprawling epic tragedy…wow.

The man was guiltier than sin itself, the blood evidence alone proving it dozens of times over, and at the end of the day the jury said “nope, the murders of Nicole Brown Simpson and Ron Goldman are not what really concern us — what matters is the importance of pushing back against decades of racist brutality by the L.A. police department by symbolically freeing a brother, even if that brother was a super-egotist who never really self-identified as ‘a black guy’ and was in fact ‘a Brentwood white guy’ through and through.”

This morning I decided to marathon through episodes #2, #3 and #4. I’m watching #2 now, and more particularly the section covering the ’92 L.A. riots. I was there. Actually, I wasn’t — I was mostly huddling in my West Hollywood home — but I remember the faint but distinct aroma of burnt wood and rubber, and how empty the nearby streets were after a dusk-to-dawn curfew order, which was in effect for at least one night. (More?) On one of the curfew nights I met with Entertainment Weekly‘s then-editor Barbara O’Dair on a hotel patio near Sunset Blvd.

A few days later I was filing a story from Cannes about a highly-charged conversation I’d had with director Spike Lee. I had shown Lee a quote from Mickey Rourke that basically laid the blame for the L.A. riots on Lee and John Singleton for having incited the conversation, or something along those lines. Lee flipped out — here are his remarks.