I never received invite #1 to see Steven C. Miller‘s Marauders, which of course is opening on Friday (7.1). The Falco guys invited me to a NYC screening, but no LA-based publicist has invited me to jack squat. Has the premiere already happened? Is there a screening this week? I feel concerned about the participation of Dave Bautista. I feel deflated when I hear/see women weeping during a bank-robbery sequence. I feel conflicted in general. In your hands…or not.

June 27, 2016 8:01 amby Jeffrey Wells
26 Comments
The Depression I’ll Feel When Hillary Announces Tim Kaine As Her VP Will Be Incalculable

The Hillarybots (i.e., a crowd vividly repped by Sasha Stone) who keep saying it’s time for Bernie to persuade his followers to vote for Hillary have some kind of entitlement complex — “She won the most delegates so shut up, bow down and get in line.” Hold on, hold on — it’s on Hillary to bring these people in, not Bernie. But one way to totally smother enthusiasm among the Berniebots will be for Hillary to choose Tim Kaine, a go-along Virginia Senator and liberal-humanist establishment politician, as her vp. Hillary will never be a levitational candidate, but Hillary + Kaine….good God, welcome to the ’90s.

“Curiosity is the lifeblood of creativity, and when we lose curiosity I think we lose, entirely, inventiveness and we start becoming old.” — Guillermo del Toro. On August 1st a portion of GDT’s “Bleak House,” which I was given a tour of in December 2012, will be on view for nearly four months (8.1 thru 11.27) at a Los Angeles County Museum presentation called “Guillermo del Toro: At Home With Monsters.” The show will present 450 objects, or roughly 10% of GDT’s entire collection.

Actors starring in smaller-scale films tend to seem recognizably human, but when they appear in blockbusters they exude a narcotized aura, as if their organs (including their brain) have begun to shut down. So it is with Chris Pine. I realized he was an interesting actor seven years ago when I saw him in a Geffen Playhouse production of Farragut North. Pine was at least semi-engaging in Unstoppable, Z for Zachariah and Into The Woods, and his performance as a Texas bank robber in David Mackenzie‘s Hell or High Water, which I saw in Cannes last month, may be his best yet. But mostly Pine makes big-budget CG action crap, and movies like this send me into the cave of hell. I will do nothing but submit and suffer when I see Star Trek Beyond, all so I can go home and explain how it feels to nod off from a lack of oxygen, and how many times I retreated to the lobby to check messages, etc.

Sorkin remark #1: “No one ever in life starts a sentence with ‘dammit.'” Wells counter: “True, but I say ‘dammit’ to myself over and over so if a character is alone at a desk, in bed, driving or in the shower, it’s usable.” Sorkin remark #2: “I’m in a constant state of writers’ block. Writers’ block is my default position.” Wells counter: “What Aaron means is that it’ll sometimes take him a couple of hours to start churning out thoughts and passages. Which is more like writers’ stall than block.” Sorkin remark #3: “It’s not that dialogue sounds like music…it actually is music.” Wells counter: “But if you try too hard to write ‘music’ it’ll come out stilted and turgid. You just have to turn on the spigot and hope for the best.”

Six years ago I wrote the following about a trailer for Terrence Malick‘s The Tree of Life: “It’s basically saying that the cosmic light of the altogether is out there and within us, but the rough and tumble of survival (along with some brutal parenting at the hands of a guy like Brad Pitt‘s character) keeps us in a morose and damaged place. And what a sadness that is when brutalized kids (Sean Penn‘s character) grow up and start passing the grief along.”

I dealt with a fair amount of dark-cloud vibes from my late dad, an advertising guy who passed eight years ago this month. I’d like to think that I didn’t pass along the bad stuff to my sons, but of course I did to some extent. This is especially true concerning my younger son, Dylan, and for this I am truly sad and sorry. This morning I happened upon a piece that I wrote about my father a couple of days after his passing. It’s honest and decently written, and in honor of all that water under the bridge…

“My father, James T. Wells, Jr., had 86 years of good living, mostly. He was miserable at the end, lying in a bed and watching the tube and reading and sleeping and not much else. I think he was okay with moving on because his life had been reduced to this. He was a good and decent man with solid values, and he certainly did right by me and my brother and sister as far as providing and protecting us and doing what he could to help us build our own lives.

“But he was also, when I was a kid and a teenager, a crab and a gruff, hidden-away soul (his Guam and Iwo Jima traumas as a Marine during World War II mashed him up him pretty badly) and, when he got older, something of a curmudgeon. But not altogether. He could be funny about it. Mean funny. Two or three years before his death we were in a Woodbury luncheonette, and when one of the waitresses called out to another in a nasally tone — ‘Jeanine!’ — my dad delivered a nasal imitation that was audible to several diners sitting nearby — ‘Jeanine!’

“I feel very badly for his suffering the indignities of old age and the mostly horrible life my dad lived over his final year or two. I know that whatever issues I have with my manner, attitude or personality, it is my charge alone to deal with, modify and correct them. But I also know deep down that Jim Wells was the father of it. He lived in a pit so deep and dark. 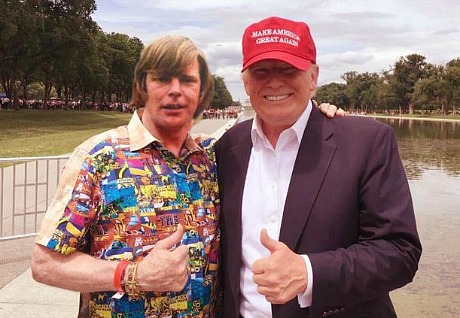 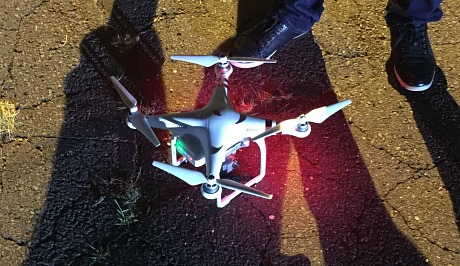 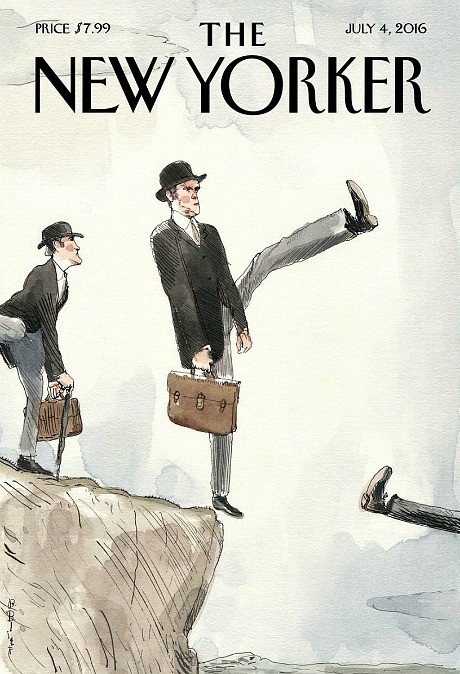 The forthcoming TV spots supporting Trump and Hillary will almost certainly be more savage than anything seen in any previous Presidential season. That famous 1964 “Daisy” ad, an anti-Goldwater spot beginning with a little girl picking flowers and ending with nuclear Armageddon, is generally regarded as the most damning, but Hillary’s forthcoming beware-of-Trump ads will be tastier still. This 6.20 PAC ad hits the mark, but seems relatively restrained given what Trump has said over the past year.

“Published in 1977, almost a decade after his yearlong sojourn in Vietnam and after he had recovered from his own bout of depression brought on by his war experience, ‘Dispatches‘ was a sensation — an acutely observed, acutely felt, wisely interpretative travelogue of hell, deeply sympathetic to the young American conscripts, and deeply skeptical of the political and military powers that kept them there.

“Written with the residual rhythms of the 1960s counterculture, redolent of drugs and rock ’n’ roll, it was also partly fictionalized, though its authenticity was received by critics — and ordinary readers — as indisputable, and they treated it as an exemplar of the kind of fiction that is truer than fact.

“In an interview on Thursday, the novelist Richard Ford, who was a friend of Mr. Herr’s, said ‘Dispatches’ ‘gave an emotional, verbal and aural account of the war for a whole generation — of which I am a member — particularly for those who didn’t go. His nose was right in the middle of it, and he wrote exactly what it was like to be in that place and to be that young.” — From Bruce Weber‘s 6.24 N.Y. Times obit-profile of Michael Herr. Here’s my 6.24 quickie.

There are three 20somethings bantering on my Fairfield-bound train.  They won’t stop giggling at almost every remark, and after a while you can’t ignore them any more.  You have to look up, give them a stink-eye and telepathically ask “what is fucking  wrong with you?” Some people have the serenity and the character to just listen and respond to others according to the funny-tude or intrigue levels or wisdom being shared.  If a laugh or a howl or a chortle is warranted, fine.  But when every other damn sentence is hyuck–hyuck hilarious, it’s an indication of a kind of social neurosis. I’m telling you it’s fucking exhausting to listen to these giggly dogs (two dudes and a girl).  I just zapped them with another stink-eye beam — ignored.  I just want you to hurt like I do. 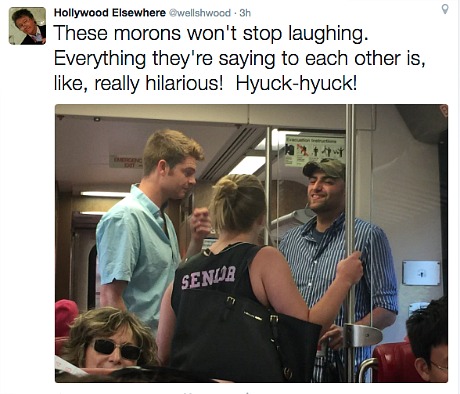 Not to get all icky but some of us self-identify as female foot fans, and I thought I’d put this out there. Every woman on the face of the planet walks around in sandals during the summer but a very tiny fraction have feet that you could honestly describe as seriously arousing, astonishing or wowser. Most, I would say without malice, seem unfortunately shaped in one way or another. This is not “a problem” but it is, to be candid, a fact. Rather than sound all pervy by describing great-looking feet, here’s a shot that a girl I was friendly with four or five years ago sent me once. Her own, taken by herself. I’m sorry but this — this — is what world-class feet look like. Lean, trim, athletic with a perfect pedicure. Big toe not too long, little toe not too small. 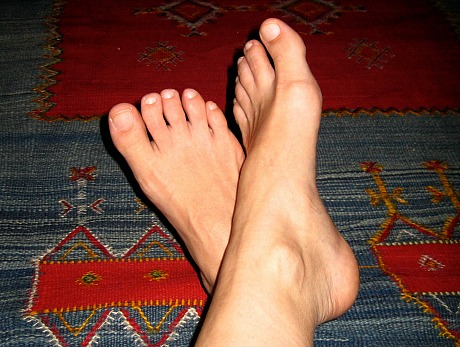