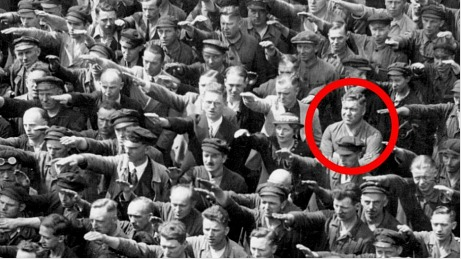 Ted Cruz’s closing words at tonight’s Republican convention gathering: “Vote your conscience.” He was booed. Zero philosophical agreement with this creep, but I respect his decision to refuse to fold and endorse Donald Trump.
(More…)
July 20, 2016 8:21 pmby Jeffrey Wells
41 Comments
Respect The Man

I learned of the death of the admired, much beloved Garry Marshall early last evening during a long walk along the beach. I didn’t mean to convey a lack of respect by not posting a remembrance or at least an acknowledgment earlier today, but honestly? I never felt that strongly about his influence upon TV comedy (Happy Days, Mork & Mindy, Laverne and Shirley) or the films he directed. The truth is that Marshall, a sharp, tough-minded guy known for warmth, caring and solid professionalism, had a thing about feel-good material. He liked fantasies, loving friendships, up vibes, romances that end well, families, communities. No disrespect is intended when I say I genuinely liked two films of his — The Flamingo Kid and Runaway Bride. And that I honestly hated Pretty Woman. Marshall brought a lot of laughter and lifted the mood of millions who watched his stuff for 40 years, but he wasn’t my kind of guy. In my book the best thing Marshall ever did was that classic Las Vegas scene with Albert Brooks in Lost in America. I loved the way he referred to Santa Claus in this scene as “Santy” claus.

From Owen Gleiberman’s Variety review, filed during 2016 Cannes Film Festival: “Directed by the Venezuelan-born Jonathan Jakubowicz, who also wrote the script, Hands of Stone punches ahead in a conventional, aggressive, no-frills way.

“At this point, of course, the bar for boxing films has been set rather staggeringly high. Raging Bull turned the pugilistic melodrama into Shakespearean blood opera (it also had the greatest fight scenes that had ever been staged), and in recent years other movies have only built upon its achievement. The Fighter, with its dizzying use of hand-held camera, put the audience even more close-up into the ring, and Creed, with its fight scenes coming at you in astonishingly fluid unbroken takes, upped the existential intensity.

The highlight of my publicity work during the mid to late ’80s (staff writer at Samuel Goldwyn, unit/in-house publicity for New Line Cinema, press kit writer for Cannon Films) was trying to sell a notion that the great M. Emmet Walsh deserved a Best Supporting Actor Oscar nomination for his performance as sleazy shamus Loren Visser in Joel and Ethan Coen‘s Blood Simple. Walsh paid me to create press releases, create trade ads and generate press attention that might push this along. We ultimately couldn’t persuade the Academy, but Walsh won the 1985 Spirit Award for Best Male Lead. And I got to join Walsh for a lunch with Joel and Ethan somewhere in downtown Manhattan.

A digitally restored 4K version of Blood Simple is being re-released theatrically in Los Angeles on 7.29. The Criterion Bluray will pop on 9.20.16.

I wouldn’t go to Comic-Con with a knife at my back and a $1000 cash bribe in a brown paper bag. Except for noteworthy exceptions like Ant-Man, Avatar, portions of the 2014 Godzilla, Guardians of the Galaxy, the first two Captain America flicks and others I’m forgetting right now, the Comic-Con influence is the nexus of evil in the action-movie realm. ComicCon culture despises real-world thrills. Knowing as I do that real-world thrills (example: Han Solo dodging asteroids in The Empire Strikes Back) are the only kind that drill right into my nervous system and that nothing puts me to sleep like generic CG pigfucks in fantasy action flicks (example: the dino stuff in Jurassic World), there’s no choice but to despise ComicCon with every fibre of my being.

Seriously — Solo dodging asteroids in Episode V (a memory that is 36 years old now) feels like bare-bones, no-frills reality compared to the fake-itude and crap-itude that ComicCon product has come to represent in my head.

Comic-book/superhero/fantasy/CG/fanboy culture has obviously been good for Hollywood’s bottom line from time to time, but it’s been poisonous in terms of its formulaic reliance and suffocating repetitions, and the general dilution of the influences and traditions of 20th Century dramas, spectacles, comedies and action films. The ComicCon mentality is a sworn enemy of the actual realities of life on the planet earth, which is to say recreations of same for centuries, going back to the time of Shakespeare. ComicCon-ers are the aesthetic locusts of our time — the dustbowl drought visited upon potentially fertile cinema.

Yesterday afternoon’s post about my loathing for the idea of Hillary Clinton choosing Secretary of Agriculture Tom Vilsack for her vice-presidential running mate was honest but too brusque, too emotional. Here’s a more measured rephrasing. My basic reaction was “where did this jowly bear come from? A good fellow by all reports but what does he have to do with 2016 fever?” 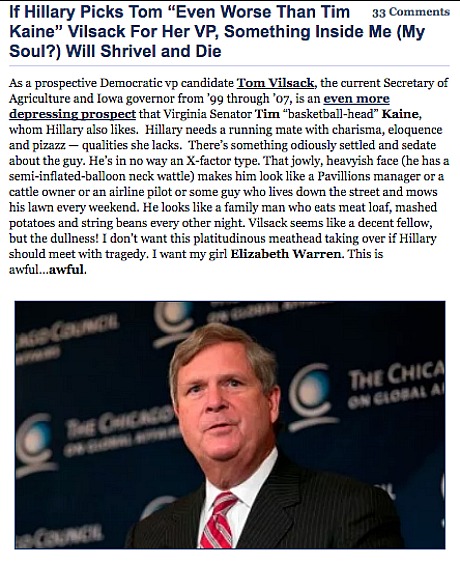 Vilsack seems like a nice, decent, liberal go-alonger, but the spirit of the 2016 primary season, including much of the frothy passion on the Republican side, was about “no, no…something cleaner, angrier…something that blows off the usual procedures and reshuffles the deck.” Vilsack (along with Virginia Senator Tim “basketball-head” Kaine, whom Hillary also likes for vp) is a card in the deck. He’s not a re-shuffler or a gamechanger. He’s an amiable politican from Iowa.

Choosing Vilsack/Kaine over electric Elizabeth Warren — who should have run against the 1% oligarchy instead of Bernie Sanders — will be nothing short of (a) a spiritual dilution and even a kind of poisoning of the Democratic climate and (b) a backhanding of the whole Bernie movement and the strongly passionate sense that “we need a revolution” and “we need to get rid of the settled, go-along, acquiescent mentality of legislators who seem less than passionate about reducing the influence of the 1% and advancing income equality,” etc.

The whole primary season was about this feeling, this clamor, and now Clinton is apparently prepared to say “okay, that was that but I’m the cheese now, I’m running the show and this is what I want from a practical perspective.” It makes me seethe. I want to spit on something. If I owned a pair of boxing gloves I’d punch my refrigerator door with everything I have.

14 Comments
Melania Was The Culprit…No, Wait, Meredith McIver Is

Yesterday Trump campaign honcho Paul Manafort (a) discarded the narrative about a “team of writers” being the principle authors of Monday night’s partly plagiarized speech delivered by Melania Trump in favor of (b) saying it was “Melania’s speech.” (What happened to the “team”?)

That all changed this morning when Melania’s speechwriter Meredith McIver accepted blame for inserting Michelle Obama‘s words into the speech and offered her resignation, which of course Donald Trump refused to accept. N.Y. Times reporter Maggie Haberman broke the story an hour ago. It includes quotes McIver’s statement on the matter, taken from the Trump website:

“In working with Melania on her recent first lady speech, we discussed many people who inspired her and messages she wanted to share with the American people,” McIver wrote.

“A person she has always liked is Michelle Obama. Over the phone, [Melania] read me some passages from Mrs. Obama’s speech, as examples. I wrote them down and later included some of the phrasing in the draft that ultimately became the final speech. I did not check Mrs. Obama’s speeches. This was my mistake and I feel terrible for the chaos I have caused Melania and the Trumps as well as to Mrs. Obama. No harm was meant.”

(More…)
July 20, 2016 10:48 amby Jeffrey Wells
8 Comments
Black Poker: The Year of the Oscars-So-White Apology Vote (and the Backlashes That Will Follow)

As usual, Sasha Stone and I talked too long, went astray and meandered half-assedly into topics that we should have left well enough alone. But then Sasha cut it down. At least we got into the likelihood of African-American films being front and center in the coming awards season, if for no other reason than to make up for last year’s Oscars-So-White nominations that led, in part, to AMPAS Board of Governors expanding membership and seeking to reduce the influence of old, encrusted white farts. Here’s the mp3.

As I wrote yesterday, Nate Parker‘s The Birth of the Nation and Denzel Washington‘s Fences will probably be eyeball-to-eyeball in the Best Picture race, and it’ll likely be Fences‘ Viola Davis vs. Loving‘s Ruth Negga in the Best Actress race or — this is Sasha’s brilliant suggestion — Negga sidestepping the Davis competish by running for Best Supporting Actress. Again, the mp3.