Support on Patreon Follow @wellshwood
25 Comments
Before The Cock Crows

I’m only just getting around to watching Bill Maher‘s “Whiny Little Bitch” show, which was performed last night (Wednesday, 11.2) at Largo while live-streaming on Facebook Live. (I was at the Paramount preview event last night.) I’m not all that worried about the election — it’ll be tighter than expected but Hillary will win — but Maher makes me feel better about…well, everything.

Ezra Edelman‘s O.J.: Made in America has more or less been annointed as the reigning kingshit documentary of 2016, and Ava Duvernay‘s 13th has been deemed the runner-up. That’s the basic takeaway from the first annual Critics Choice Documentary Awards, which will probably influence the outcome of the documentary Oscar race.

The award show happened tonight in Brooklyn at BRIC, and if you weren’t there you were probably square. I would’ve gone if I’d been in the vicinity, but we can only spread ourselves so thin.

Of all the Hollywood hotshots I’ve interviewed or played verbal tennis with since I got going as a journalist in the early ’80s, Warren Beatty has been far and away the most fun to fritter away the time with. Because as good as they taste, Beatty chats always feel nutritional on some level after they’re over. And you always feel good about having spoken to someone as silky-polite and considerate as he.

I’ve never actually “interviewed” Beatty, but I’ve been shooting the shit with him for 25 years. Off the record, I mean. And yet our very first chat (a discussion about the limited marketing effort on behalf of Reds) happened in the fall of ’81. There’s no seminal figure like Beatty, no one who has greater stories, who’s more personally charming, whose life more fully reflects and encompasses the most tumultuous and fascinating era in American history (early ’60s to the present), who knows or has known nearly every person of consequence in this town and in Washington, D.C. combined for the last 55 years, and whose apparent disinterest in not wanting to write a great Balzacian novel of the 20th Century is…well, on one level I’m sorry but on another level, fine, whatever.

13 Comments
Thoughts of Lawnofsky & A Tranquility That Can’t Last

Whatever’s happening in a personal, one-on-one sense between Darren Aronofsky and Jennifer Lawrence, it began with their work on Mother, an ensemble relationship drama that they shot last summer. Directed and written by Aronofsky, it’s about how “a couple’s relationship is tested when uninvited guests arrive at their home, disrupting their tranquil existence.” Lawrence and Javier Bardem are the couple, I’m guessing; the costars are Michelle Pfeiffer, Domhnall Gleeson and Ed Harris. Wikipedia says that Paramount will distribute. 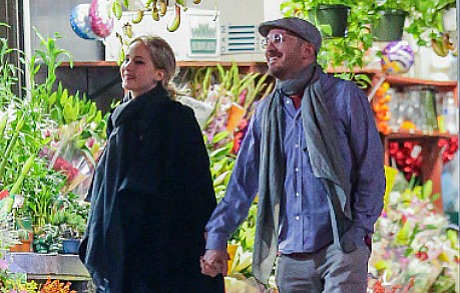 The only possible sources of intrigue in Patty Jenkins‘ Wonderwoman (Warner Bros., 6.2.17) are (a) Gal Gadot, whose brief appearance in in Batman v. Superman: Dawn of Justice was more enticing than the performances by Ben Affleck or Henry Cavill, (b) the World War I period trappings and atmosphere, and (c) possibly Chris Pine‘s performance as a quipping, deadpan love interest, Steve Trevor. Otherwise it has the same old cartoony elements that all the other superhero films have. Every new superhero flick is like the last one and the one before that, etc. Jenkins’ last big film was Monster (’03), which resulted in Charlize Theron‘s big Best Actress win.

Roughly three months ago I spoke hopefully of Craig Johnson and Daniel Clowes‘ Wilson (Fox Searchlight, 3.3.17). “It seems like my kind of film,” I wrote. You know what I mean. A smart, sardonic, character-driven, vaguely pissed-off movie that’s nonetheless funny in an LQTM way.” Well, the just-released trailer debunks that notion. Trailers tend to emphasize the lowest-common-denominator elements, I realize, but this still feels forced. The story is about a lonely, middle-aged dude (Woody Harrelson’s Wilson) and his ex-wife (Laura Dern) reconnecting with a teenage daughter who was put up for adoption as a kid. (Or something like that.) I was thinking before that with Clowes having written Ghost World and High School Confidential, and Johnson having directed The Skeleton Twins that this might be okay. Now I’m less certain.

I don’t laugh at raunchy formula comedies like Office Christmas Party (Paramount, 12.9). I did, however, watch this trailer during last night’s Paramount preview party, and while I sat there silent and ashen-faced, a journalist pal sitting two seats away was going “oohh-whoo-hooh-hoahhh-hee-heeeeeee!…oh-hoh-hah-hah…hee-hee-hee-hee-hahhhh!” and so on. Did I look over and give him the old stink-eye? No. I just sat there like Boris Karloff‘s mummy before taking a sip of tana leaf tea.

Wiki synopsis: “When company CEO Carol Vanstone (Jennifer Aniston) announces an intention to close the branch of her hard-partying brother Clay (T. J. Miller), he and his chief tech officer (Jason Bateman?) must rally their co-workers and host an epic office Christmas party in an effort to impress a potential client and close a sale that will save their jobs.” Costarring Courtney B. Vance, Kate McKinnon, Olivia Munn, Jillian Bell. Directed by Josh Gordon and Will Speck.

This is a dumbshit thing to say but I feel a very faint kinship with Marion Cotillard‘s French-spy character in Robert Zemeckis’ Allied (11.23). Her name is Marianne Beausejour, you see, and I’ve long felt a special affection for a cute little Montmartre flophouse called the Hotel Bonsejour so no cigar but close. It’s all symmetrical in the end. I last stayed at the Bonsejour on 5.8.15. I don’t care if you think I’m an idiot for posting this. I can post anything I want within the bounds of reason and rationality. Update: “Bon sejour” means “have a good stay” and “beau sejour” means “nice stay.” Sejour is from the Latin root; the Anglican version is sojourn. 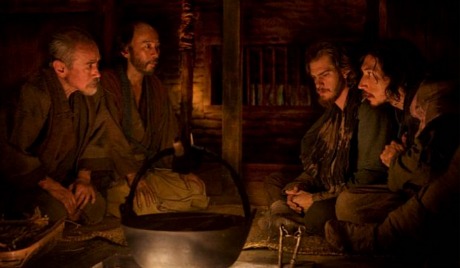 The highlight for me was a longish dialogue scene from Denzel Washington‘s Fences, which will screen in its entirety this Saturday in Westwood. It was about Denzel’s Troy Maxson sharing a tale of fatherly abuse to a couple of male friends as they sit in the shade of a Pittsburgh tenement. I like the way Denzel-the-director holds and holds and doesn’t cut. I could just sense that Fences will be formidable as fuck, and that Viola Davis has the Best Supporting Actress Oscar all but sewn up.

Clips from Denis Villeneuve‘s Arrival (11.11) meant little as I’m not a huge fan, but I was taken with an extended dialogue scene from Robert Zemeckis’ Allied (11.23). The Wiki synopsis as well as a recent trailer convey the basic set-up — anti-Nazi assassins Max Vatan (Brad Pitt) and Marianne Beausejour (Marion Cotillard) married with a child in England. But then a pair of British intelligence officers (Simon McBurney, Jared Harris) explain to Vatan that they believe Marianne is a “sleeper” spy for the Germans, and that Vatan needs to help them confirm or disprove this.

I found it odd that McBurney’s character is not only indifferent to the shock that Vatan would naturally be feeling, but seems to be poking him with a stick. Anyone with a semblance of humanity would say to Vatan, “Look, we don’t like this situation any more than you do, Max, and we’ll be delighted if proved wrong, but we obviously have to clarify things one way or the other, and if our suspicion turns out to be true, there won’t be any choice about what will come next. It’s an awful situation, but this is war.”

This new La La Land poster goes wide on Thursday morning at 7 am Pacific, 10 am Eastern. BFCA members have been told they can post at 5:30 am Pacific, 8:30 am Eastern — a 90-minute advantage on non-BFCA sites. I don’t break embargos but it’s 12:25 am Pacific, and I want my six hours of sleep so I’m posting this a bit early. It’s not that big of a deal. It’s not news or an announcement story — just a nice-looking variation of a poster we’ve seen before but with an emphasis on rave blurbs. 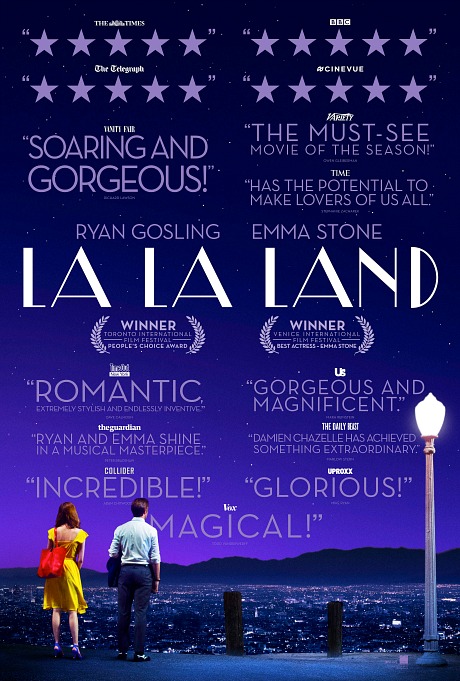