Due respect and condolences to friends, family and fans of Florence Henderson, who passed today (Thursday, 11.24) at age 82 from a heart attack. Everybody knew her as Carol Brady, of course — the soothing matriarchal figure on The Brady Bunch. Which, no offense, I avoided like the plague.  And which millions of viewers swore by during its four and a half year run (9.26.69 to 3.8.74).  The final episode of that ABC-produced, Nixon-era sitcom aired 42 and 1/2 years ago. 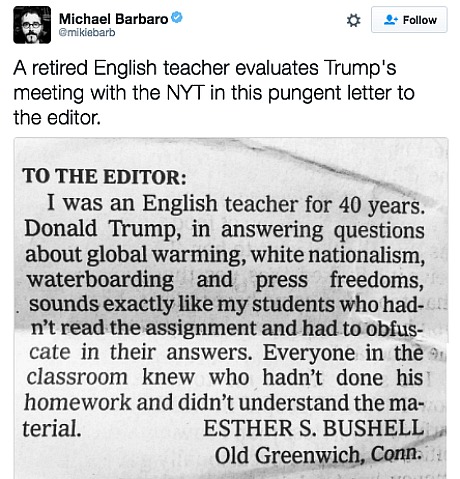 Sean Penn‘s The Last Face was butchered like a steer during last May’s Cannes Film Festival. A tale of a torrid affair between attractive aid workers (Charlize Theron, Javier Bardem) as third-world horrors unfold, Face currently has a 12% Rotten Tomatoes rating. It will open in France on 1.11.17 but so far Summit Films hasn’t announced a domestic release date. AV Club‘s Mike D’Angelo: “By the time [Theron] wraps things up with a sententious speech about how dreams are more important than oxygen, both have been completely sucked out of the theater.” The Hollywood Reporter‘s David Rooney: “[A] stunningly self-important but numbingly empty cocktail of romance and insulting refugee porn.” Cole Smithey: “If ever there was a movie that could make you dislike relief-aid doctors, The Last Face is it.”

Back in my Westfield days there was a big, dark-haired beefy guy named Bob Simon who used to give me all kinds of shit in junior and senior high. I hated him with a passion, and I seem to recall hearing a few years back that he’s dead. God’s grace if true! I was once beaten by Simon in the back of a car on a trip back from Staten Island, where’d we’d go every weekend to get drunk as skunks. Admittedly I would act like an asshole after downing four or five cans of beer (“I’m a six-can man!” I triumphantly slurred one night) but that’s a side issue.

The animus between Simon and I began during 8th grade band practice. I played second trumpet; Simon was on the bass drum. During an attempt to perform a marching number, the headstrong music teacher (Mr. Buriss, called “Mr. Bur-ass” by some of his more spirited students) got angry with Simon for repeatedly missing a cue. He lost his temper, whacked his conductor’s stick on a metal bandstand, glared at Simon and blurted out “my God, man…you are thick!” I told the guys in our peer group about the incident, and for the next few days “Simon, you’re thick!” was a thing. From that moment on I was on Simon’s shitlist. The goadings, humiliations and degradings were constant.

The Westfield high-school climate was hellish, no question. I suppose on some level it sharpened or toughened my game, but I think I suffered from a kind of PTSD for a couple of years after our family moved to Wilton, Connecticut.

(1) “The fundamental reason that Trump won is the anger in America and other developed countries at the unfairness of the distribution of wealth. It’s been building and building, and all of a sudden it broke through.” HE comment: “Globalism has sent manufacturing jobs to less wealthy countries, but at the same time white bumblefucks haven’t acquired the skills or the mindset to be part of the new economy. Faced with an ‘adapt or die’ situation, they chose to throw a hand grenade by electing a sociopathic strong man who lacks the necessary temperament and brain-cell count. I hope and pray that the misery quotient in their lives will continue to be strong and draining. The sooner these people die out, the better for all of us.”

(2) “Sanders wounded [Hillary Clinton] badly. He’s the one who sold the argument that she was corrupt and bought by Wall Street. Sanders helped Trump become the guy who says we are tired of rich guys getting away with everything. Sanders helped persuade people that she is on the wrong side of that issue.” HE comment: Sanders spoke the truth about Clinton but ran, for the most part, a highly principled and inspirational campaign.

(3) “If [Hillary] hadn’t been using that e-mail system, she would have won, and [FBI director James] Comey exacerbated the problem.” HE comment: The majority of Americans wanted Hillary to be President — she’s currently over 2 million votes ahead of Trump in the popular vote — but without the emails and the Goldman Sachs speeches, Hillary would have most likely won an electoral college majority.