Debbie Reynolds, the 84 year-old actress and musical legend who was the mother of the just-departed Carrie Fisher, died this afternoon after being hit with a stroke around 1 pm. It doesn’t feel like a stretch to imagine that the stress brought on by her daughter’s passing might have been a contributing factor. Debbie’s breakout performance in 1952’s Singin’ In The Rain (shot when she was only 19, which was also Carrie’s age when she made Star Wars: A New Hope) is her most referenced. Her biggest subsequent films were The Catered Affair (’56), Tammy and the Bachelor (’57), How the West Was Won (1963), The Unsinkable Molly Brown (’64), Divorce American Style (’67) and Albert Brooks‘ Mother (’96), and In & Out (1997). Ms. Reynolds became the Jennifer Aniston of the early ’60s when her husband, pop singer Eddie Fisher, left her for Elizabeth Taylor, who in turn became that era’s Angelina Jolie. Reynolds was also a popular nightclub and concert performer until relatively recently. A superb, warts-and-all portrait of Debbie and Carrie’s recent joys and travails is contained in Alexis Bloom and Fisher Stevens‘ Bright Lights: Starring Carrie Fisher and Debbie Reynolds, which will air three months hence on HBO. 2016 — the killer that keeps on killing.

I can’t let 2016 slip away without offering a final thanks to Hillary Clinton and the corporate-funded, 50-plus, go-along neoliberal DNC establishment machine for ushering in a Donald Trump victory, and in so doing permitting the worst catastrophe since 9/11 to be visited upon the U.S.A. Seriously….thanks, guys! Thanks for refusing to recognize what was going on during the primaries (Trump and Bernie Sanders tapping into the same angry, fed-up voter pool) and willing yourselves into believing that Hillary would somehow marshall that anger and use it to win because it was time for a woman in the Oval Office, when in fact she represented, however ignorantly, what these angry voters were fed up with and wanted to get rid of. Yes, I voted for Hillary in order to deny Trump, but I never liked her, not really. And too many angry, fact-free dumbshits hated her, and that’s why she lost. And now we’re in hell. Thanks, genderists! And thanks, low-information African-American voters for torpedoing Bernie in the southern states because he didn’t have a black-enough vibe…good one! And thanks, Elizabeth Warren, for not challenging Hillary in the primaries — you could’ve been the female Bernie figure and a winner to boot. (Would Jill Stein have run if Warren had landed the nomination? I doubt it.) And thanks, Hillary, for choosing Tim stodgy Kaine as your vice-president instead of Warren or somebody with serious anti-corporate credentials.

What’s the response to what I’ve been saying since November, which is that it’s a taut, better-than-decent, above-average docudrama and that the Act Two gunfight sequence in Watertown is a classic of its kind? 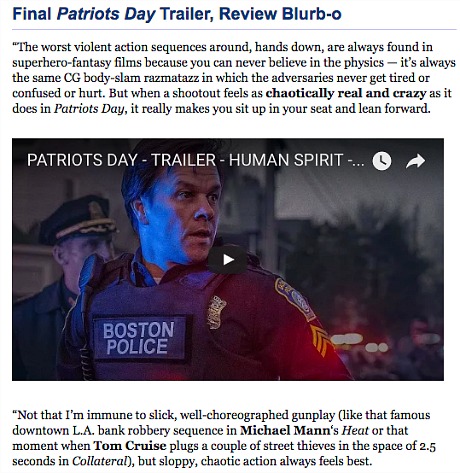 Three years ago I bought a high-def (HDX) version of Michelangelo Antonioni‘s Blow-Up (’66) on Vudu. It’s easily the sharpest, best-looking version I’ve ever seen. Does this mean I’m not interested in the forthcoming Criterion Bluray (3.28.17)? No, I’m interested. Restored 4K digital transfer plus the usual extras (including a new 52-minute doc about the making of this seminal ’60s culture film). I’m there — a sucker for this stuff. 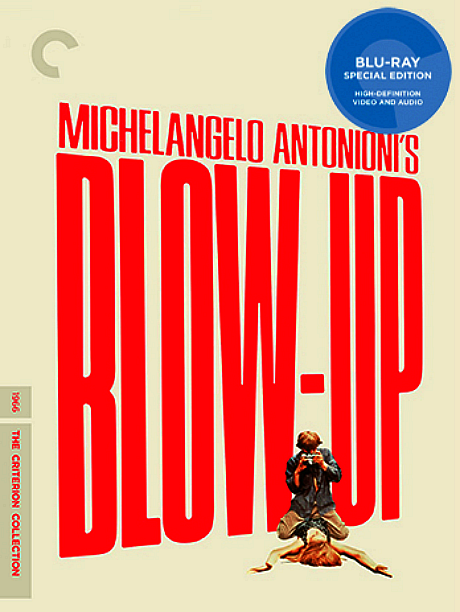 Am I appalled at Criterion’s apparent intention to crop this new version at 1.85:1? Yes, I am. Because it was shot in 1.66, and should damn well be presented that way. Will it look awful at 1:85? No, but it’ll be wrong to do this. When I think of all that wonderful headroom being sliced off…

And the Criterion guys used to agree with me! A scan of the notes used for a Criterion CAV laserdisc of Blow-Up says the following: “This edition of Blowup was transferred from a 35mm master print in the correct aspect ratio of 1.66:1. The soundtrack was mastered from a 35mm magnetic track.” In a 2010 review of a Japanese DVD version, which was cropped at 1.78:1, DVD Beaver‘s Gary W. Tooze wrote the following: “We can confirm that these DVDs are in the incorrect aspect ratio. This film was definitely shot at 1.66.” 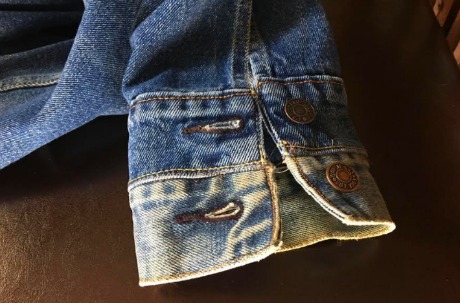 I found a perfectly fitting jean jacket — trim, real denim, inexpensive. The only problem was that the sleeves were a bit short. So I bought it and went home and cut off the cuffs on another old jean jacket (i.e., one that I’ve been ignoring for years) and drove to Hollyway Cleaners and told the tailor to attach them. Good job. 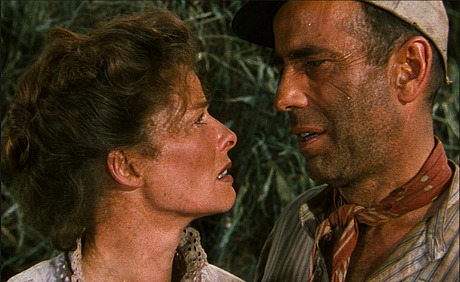 If Humphrey Bogart hadn’t worn his usual rug when he played Charlie Allnut in The African Queen, audiences wouldn’t have bought the romantic relationship between Allnut and Katharine Hepburn‘s Rosey and he almost certainly wouldn’t have won his Best Actor Oscar. Same standard applies in other professions. You can’t let your hair get too sparse. You can go with a Jack Nicholson thing to a certain extent, but you have to hold on to something up top. I told this to a balding friend last weekend. “Don’t take this the wrong way but you have to stop the ebbing,” I said. “You can fix things in Prague at $2K per session, which is one-third of what it costs in the States. And it doesn’t look like anything. You have to keep up appearances — you can’t go full baldie.” Unless you do a Vin Diesel head-shave thing, I mean. But if that doesn’t work for you, micro-plugs are easy.
(More…)
December 28, 2016 2:14 pmby Jeffrey Wells
28 Comments
Films Are About Focus, Concentration — Netflix/HBO Longforms Are About Couches, Sprawling Narratives, Camping In

What’s behind this exactly? Why do viewers routinely complain about films that last longer than 115 or 120 minutes but are always down with six, eight or ten-hour commitments at home? I’ve said repeatedly that movies are a more difficult form to crack than longform cable narratives, and are therefore more formidable in the long run — higher nutritional levels, greater linger-effect, etc. The other factor, obviously, is that couch comfort trumps the communal theatrical experience all to hell. People start to get itchy after the two-hour mark, but weekend binge-viewings are far less challenging and actually soothing on a certain level. If, that is, you don’t mind sprawling narratives that just go on and on because there are so many hours to fill. 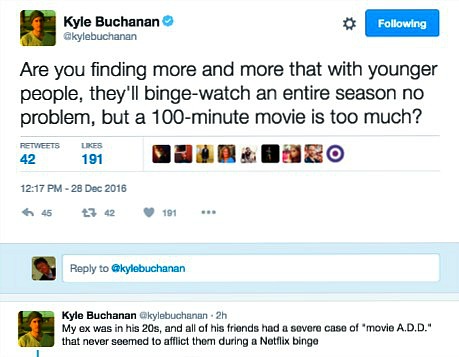 Every so often a Rolling Stones earbug will take over. It happened last March in Hanoi with “Monkey Man.” Now it’s “Backstreet Girl” — a gentle mood piece with a waltzy tempo. Well, not lyrically “gentle” — it’s actually an ode to heartlessness and diminishment in which a married guy tells a sometime girlfriend to keep her distance. But the musical accompaniment — vibraphone (Brian Jones), harpsichord (Jack Nitzsche) and accordion (Nick de Carolulls) — lulls and soothes. Especially the accordion. The arrangement argues with the content and vice versa, but that’s the odd charm of it. Again, the mp3.

“Backstreet Girl” was on the British version of Between The Buttons (’66) but not the U.S. version — it later turned up on Flowers (’67).

After posting about Carrie Fisher’s passing I spent most of yesterday (five or six hours) tapping out the first draft of a short film. Just a one-set conversational thing (based on a real encounter that happened in New York in the early to mid ’80s), but it has a mapped-out beginning, middle and an ending and a fair amount of backstory and exposition to cover. And it has to be done within 15 pages or less. I was happy with the dialogue and portions of it here and there, but it’s hard to get it right as a whole. I punched out three or four spec screenplays in the mid ’80s before realizing that my talents lay elsewhere, and yesterday those old feelings of frustration came rushing back. It was fun for a while, but then I began to feel like I was making my way across Lake Michigan in a rowboat. I learned a long time ago that short, concise reviews are a lot harder to bang out than longish, sprawling ones. Same deal with scripts.

Yesterday an Independent headline proclaimed that this Star Wars audition tape showed that Carrie Fisher was “perfect” for the role of Princess Leia, and that an “immediate chemistry” between herself and Harrison Ford was apparent. I don’t see that. My takeaways are as follows: (a) Raw readings of not-quite-there dialogue remind you that scenes, scripts, performances and films themselves are always improved upon bit by bit, and that minus the right elements and final refinements (cutting, pacing, scoring) you can be excused for thinking “Jesus, this isn’t very good”; and (b) I love the fuzzy, low-rez images and noisy textures of mid ’70s reel-to-reel videotape. I bought a black-and-white video camera and tape player in late ’76, and taped a lot of bands, odd events and fooling-around material for a year or so before moving to Manhattan. None of it was transferred to VHS or DVD…sad!

7 Comments
We All Improve With Age

In an 11.28.16 interview between Carrie Fisher and Fresh Air‘s Terry Gross, Fisher discussed the character of the youngish Harrison Ford, with whom she had an affair during the making of Star Wars (i.e., Episode IV: A New Hope).

Gross noted that Fisher had described Ford in “The Princess Diarist” as “kind of quiet and maybe kind of cold.” Fisher elaborated somewhat:

“Well, he’s not the warmest person. He’s not accessible, let’s say that. He doesn’t talk a lot, and I’m very extroverted. And so that…it sort of was going nowhere. It was sort of one half of a conversation was happening. You know, he’s not a big talker. That’s all. He just…he’s very quiet and chews the side of his mouth a lot.”