All of a sudden and out of the blue, I found myself today respecting and agreeing with Senator Marco Rubio. I can’t believe it, but there it is. He manned up, stood tall, told it straight, no quarter.

From David E. Sanger and Matt Flegenheimer‘s N.Y. Times story about Rubio’s interrogation of former Exxon CEO and would-be Secretary of State Rex Tillerson: “One especially skeptical Republican was Senator Marco Rubio of Florida, whose vote on the Foreign Relations Committee might well decide the fate of Mr. Tillerson, the former chief executive of Exxon.

“In one contentious exchange with Mr. Rubio, who ran against President-elect Donald J. Trump last year for the Republican nomination, Mr. Tillerson rebuffed an effort to get him to describe Mr. Putin as a war criminal for ordering the bombing of civilians in Chechnya. ‘I would not use that term,’ he said.

I’ve rsvped to an IMAX Playa Vista screening of La La Land tomorrow evening at 6 pm. Apparently Damien Chazelle‘s award-winning musical has been up-rezzed with a propriety IMAX technology called DMR, and not solely for this event but a forthcoming domestic release (100 IMAX bookings nationwide) plus a China release.

China Film Insider‘s Fergus Ryan reported yesterday that although a specific date has yet to be determined, the Lionsgate film “has been approved for distribution in China and will screen in the China Giant Screen format and possibly IMAX 2D.”

Tomorrow’s IMAX presentation will present the film in the same 2.55:1 aspect ratio that everyone else is seeing in regular theatres. Which means, of course, that while La La Land will look bigger it won’t really look IMAX-y in a super-tall sense, which is what the whole IMAX hoo-hah is more or less about.

90 Comments
Piss Trump, Part 2: Not Just in Moscow But, According to CIA Source, Also In St. Petersburg

BBC’s Paul Wood in a BBC broadcast (1.11.17): “The details of what are alleged to have taken place in a Moscow hotel room with a group of prostitutes would certainly damage even someone with Mr. Trump’s sexual history. The claims are in a report commissioned by am opposition research company funded by a Democratic Party donor, but it was actually written by a former MI6 officer. He spoke to members of the Russian security service, the FSB, and they told him there was a blackmail tape.

“Needless to say no one has seen it, but the former MI6 agent is not the only source for the claims about Russian kompromat, or compromising material, on the President elect. 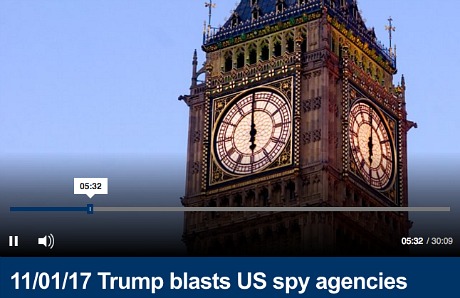 “Back in August a retired spy told me he’d been informed of its existence by the head of an East European intelligence agency. Later I used an intermediary to pass some questions to active duty CIA officers dealing with the case file. They would’t speak to me directly. I got a message back that there was more than one tape, audio and video, on more than one date and [in] more than one place — in the Ritz Carlton in Moscow and also in St. Petersburg.

“The compramat claims were credible, the CIA believed. That’s why they ended up on President Obama‘s desk last week, and [were sent also to] Congressional leaders and to Mr. Trump himself.”

Woods’ report begins around the 5:00 mark.

Poor Silence, Martin Scorsese‘s spiritual epic that has received no award-season action since opening last month, has finally been nominated by a Hollywood-based org. The American Society of Cinematographers has nominated Rodrigo Prieto‘s cinematography on Silence for its top honor at the 31st annual ASC Awards, which will happen on 2.4.17.

Prieto has been ASC-nominated twice before, for Frida (’02) and Brokeback Mountain (’05). If he wins, great. His Silence capturings are magnificent. But I’m not expecting that. Sandgren or Laxton, I’m thinking, will take the prize.

In the view of Indiewire‘s David Ehrlich, Emiliano Rocha Minter’s We Are The Flesh (Arrow, 1.13 in LA, 1.209 in NY) is some kind of ultra-grotesque ode to cruelty and perversion in the vein of Pier Paolo Pasolini‘s Salo: The 120 Days of Sodom. He describes Amat Escalante‘s Heli, which I described three and a half years ago as a fairly gruesome experience (“a starkly drawn, no-frills, deeply ugly Mexican art film about the ravaging of Mexican society by drug traffickers and how poor people always take it in the neck”), as a relatively palatable thing compared to We Are The Flesh. Minter, says Ehrlich, “takes the defining tropes of his country’s contemporary filmmaking, liberates them from the burden of narrative logic, and stretches them across the screen like Hannibal Lecter hanging a victim by the flaps of his skin.” No thanks.

“CNN’s decision to publish carefully sourced reporting about the operations of our government is vastly different than BuzzFeed’s decision to publish unsubstantiated memos. The Trump team knows this. They are using BuzzFeed’s decision to deflect from CNN’s reporting, which has been matched by the other major news organizations. We are fully confident in our reporting. It represents the core of what the First Amendment protects, informing the people of the inner workings of their government; in this case, briefing materials prepared for President Obama and President-elect Trump last week. We made it clear that we were not publishing any of the details of the 35-page document because we have not corroborated the report’s allegations. Given that members of the Trump transition team have so vocally criticized our reporting, we encourage them to identify, specifically, what they believe to be inaccurate.” — CNN statement about yesterday’s reporting about an unsubstantiated dossier that included salacious allegations about Trump’s behavior in Russia during a visit in 2013 (i.e., “Goldwater Republican”).

Speaking as a longtime admirer of refined, upscale horror cinema (Repulsion, Rosemary’s Baby, The Witch, The Invitation), the idea of four women having directed an omnibus horror film sounds and looks intriguing. Because the instincts of females in this realm, I believe, are likely to be less coarse and exploitive than your garden-variety horror directed by guys. The helmers and their shorts are Karyn Kusama (“The Invitation”), Annie Clark (“The Birthday Party”), Roxanne Benjamin (“Southbound”) and Jovanka Vuckovic (“The Captured Bird”). Sofia Carillo is also listed as a kind of animator, coordinator or showrunner of some kind. XX will open in select theaters and on VOD on 2.17.