This Anti-Defamation League spot is four years old, but I hadn’t seen it until last Thursday night when it screened at the Santa Barbara Film Festival’s Arlington Theatre.

Last night’s SBIFF tribute focused on directors — La La Land‘s Damien Chazelle, Manchester By The Sea‘s Kenneth Lonergan, 13th‘s Ava Duvernay and Arrival‘s Denis Villenueve. Pete Hammond moderated. Ever the good soldier, I was sitting in the right-front second row, passively grinding it out, taking mental notes. You know who Roger Durling should have also booked? O.J.: Made in America‘s Ezra Edelman, a sharp, fascinating dude who hasn’t been interviewed to death.

I’m a big Irish Spring or Old Spice body wash guy these days, and when I run out there’s always bar soap (Irish Spring, Dove, Dial). Every so often I’ll not only manage to run out of both, but forget about their absence until I’m in the shower with all the hot water and steam. And then I’m stuck. One substitute that isn’t too bad, I’ve noticed, is shaving cream. I’ve taken more than a few shaving-cream showers. When I’m really in a jam I’ll scamper out to the kitchen to grab a plastic-squeeze bottle of dishwashing liquid — not as good as shaving cream but at least it’s something. What happens when there’s no body wash, soap, shaving cream, dishwashing liquid, deodorant or Aqua Velva? I steam rinse, towel off and then spray myself with Febreze. I’ve honestly done that once or twice.

Hollywood Elsewhere has long been bothered by illogical elements in classic films. One is the whopping absurdity of 19th Century settlers living in the barren wilderness of John Ford‘s Monument Valley (no grass for cattle, no rich soil, no river, no nearby forest). Another is the natives of Skull Island having built a huge wall to prevent King Kong and the dinosaurs from invading their village, and yet having also constructed a super-sized gate that could only have been built to allow a beast invasion.

To these I’m adding a third head-scratcher: what the hell are the residents of Black Rock, California — the tiny hole-in-the-wall ghost town in John Sturges‘ Bad Day at Black Rock — doing there in the first place? No soil, no industry, no oil, no trees, no gold mine, not much groundwater except for the well that the late Kimoko discovered, no lake, no tourists — nothing but rocks and heat and nothing to do except sit around, play cards and scowl.

Ernest Borgnine and Lee Marvin are too dumb to realize what a blessing and godsend Spencer Tracy is because at least he’s given them something to do — i.e., prevent Tracy from learning what happened to poor Komoko. Without Tracy poking around their lives would revert to the usual paralyzing nothingness.

What are Robert Ryan, Lee Marvin, Ernest Borgnine, Anne Francis, Walter Brennan and the rest doing there? Are they all…what, living on government relief checks? Why is there a hotel in Black Rock? Who the hell would ever visit?

Another issue: Are you telling me that in the middle of this parched desert moonscape that Francis’s Liz, the 20something sister of John Ericson‘s Pete, isn’t married or “seeing” anyone in town? In a town this dead you know that someone would have stepped up and wooed his way in, and yet Liz could have been played by Thelma Ritter or Mildred Dunnock for all the action she’s getting.

“And unfortunately, during her hearing, Betsy DeVos proved beyond a shadow of a doubt not only that her ideology is incompatible with the mission of the Department of Education, but that she is fundamentally incompetent to be its leader. Throughout [her] hearing, she was unable to answer basic questions about her views on important issues. She was unfamiliar with basic concepts of education policy. I can’t overstate how central growth vs. proficiency is to education…an extremely basic, important question, and [yet during Mrs. DeVos’ hearing] she had no idea what I was talking about.”

Sen. Al Franken‘s remarks become quietly hilarious around the 20-minute mark — the “how many yards does it take to get a first down?” football-question analogy is brilliant.

“When asked how he sees comedy changing in the Trump era, Oliver offered a thoughtful answer: ‘I think you’ve probably got to work harder. That’s not necessarily a bad thing. There’s a lot of low-hanging fruit with administrations like this, and you kind of need to reach past that.'” — from 2.6.17 Hollywood Reporter interview with Hilary Lewis. 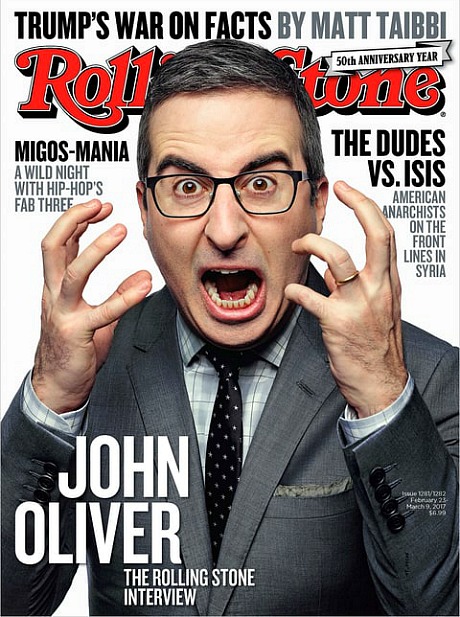