Support on Patreon Follow @wellshwood
23 Comments
Ready To Inject Fresh 2017 Serum, But There’s Not Much Happening Until 3.10

The 2017 Sundance and Santa Barbara film festivals are history, the Spirits and the Oscars are less than two weeks away and all but concluded in the minds of most, and I for one am ready to jump into the 2017 batting cage and start swinging. But not until the next three weekends are past us. Okay, one or two might pass muster. This Friday’s (2.17) top openers are Gore Verbinski‘s A Cure For Wellness (already dismissed as a shortfaller) and Zhang Yimou‘s The Great Wall (Chinese monster epic, Matt Damon)…nothing. The 2.24 toppers are Eran Creevy‘s Collide (blah) and Jordan Peele‘s Get Out….wait, this might be something. The three big openers on 2.28 are Ry Russo Young‘s Before I Fall, James Mangold‘s Logan (might be decent) and Stuart Hazeldine‘s The Shack (faith movie with HE’s own Octavia Spencer as God). As far as I’m concerned the first two rip-snorters are opening on 3.10 — Jordan Vogt-Roberts‘ Kong: Skull Island and Oliver Assayas‘ Personal Shopper. Don’t listen to the naysayers — anyone who dismisses this film needs to refresh their browser and/or upload new software. Here’s my coverage going back to last May’s Cannes Film Festival.

The Denzel surge is about the SAG win, of course, but two things have happened since to alter the chemistry — i.e., Affleck winning the BAFTA Best Actor trophy and Deadline‘s Mike Fleming running an in-depth, highly flattering making-of-Manchester piece.

Yes, there’s a perception of a horse race here and I’m not saying it’s settled, but I am saying that the Denzel surge happened two weeks ago and has since receded.

A year or so ago I posted the following about Love, the quirky Netflix romcom series created by Judd Apatow, Lesley Arfin and Paul Rust, and starring Gillian Jacobs, Rust, and Claudia O’Doherty. A new 12-episode second season will debut on 3.10. My earlier riff was basically about the fact that even by the laws of the Apatow realm (i.e., guys who were too schlubby or dweeby-looking to be cast as hapless best friends in the ’80s or ’90s are now playing leads who get the girl), Rust is too Eddie Deezen-ish to land Jacobs as a girlfriend:

“The writing on Love is obviously first-rate (genuine, unforced, not too cute) and the acting seems fine…okay, pretty good. Everything seems right and harmonious except for one small element. In real life Paul Rust would be too dorky-looking to attract someone as hot as Gillian Jacobs. She looks like Kathryn Harrold, for God’s sake, and Harrold was a little too hot even for Albert Brooks in Modern Romance.

“Girls like Jacobs know what they have and the kind of guy they can land with a little luck and connivance. If Rust was lucky enough to pair up with Jacobs in real life it would be one of those odd relationships in which both parties realize that she’s doing him a huge favor. These always end sooner or later because the guy starts to feel diminished because he doesn’t feel he has any sense of equality; he feels like a waiter who’s been given an astonishing tip.

“These things also end because it’s always just a matter of time before she decides ‘okay, he’s cool and a good soul and not a bad lover, but that beak! Plus he’s neurotic and bothersome in about 17 or 18 different ways, and I know I could do better if I get out there and start sniffing around.’

Even without the recent flare-up of the Trump Muslim ban and the natural, humanist instinct to respond to that, Asghar Farhadi‘s The Salesman should be — is — the clear favorite among the Best Foreign Language feature nominees. Farhadi can’t help but exude brilliance, such that even a respectably midrange effort like The Salesman (which, despite its admirably unhurried pacing, subtle plot turns and fascinating social undercurrents, isn’t quite the equal of A Separation or The Past) is clearly superior to the other four nominees — Toni Erdmann, Land of Mine, A Man Called Ove, Tanna. On top of which we have had the attempted Muslim travel ban (thankfully neutered by the courts), and…well, what other choice in the wake of that? 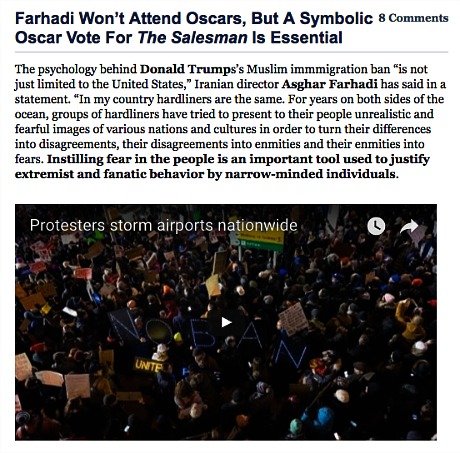 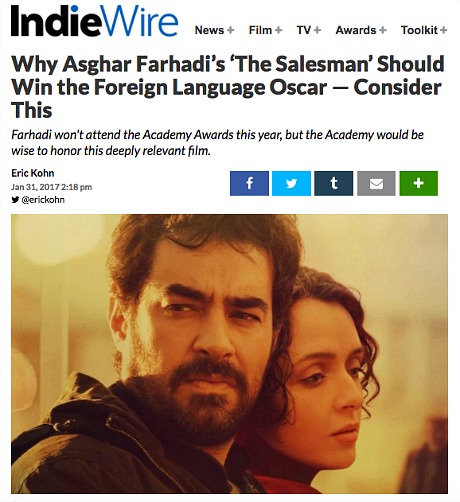 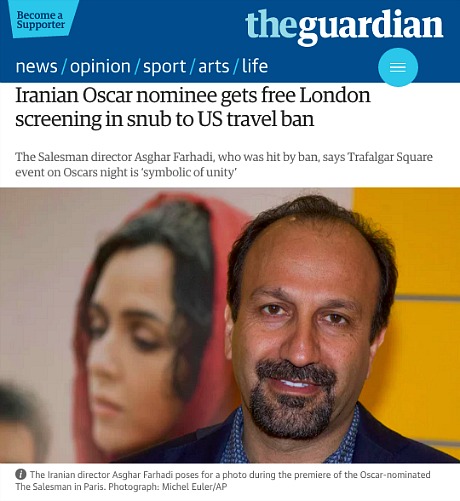 “More often than not, we’d be disappointed. It wasn’t the film we dreamed of. It wasn’t the perfect film we each had inside of us. The film we would like to have made. Or, undoubtedly, the film we would have wanted to live.” — an apparent quote from a Godard film that I can’t identify but nonetheless included in “The Empty Screen,” a video essay posted on 2.6.17 by Talkhouse.com‘s Mark Rappaport. Be honest — who has ever wanted to live inside a CG-driven bullshit comic-book fantasy flick? I’ve seen hundreds of films that I would gladly step into and merge with a la The Purple Rose of Cairo, but not once have I ever said “wow…what a beautiful thing it would be to step into a fucking Marvel movie and live in it…not once.”

The Trump administration is 28 days old, and already I’m feeling those old expanding/exploding Watergate scandal vibes. Everyone’s blood is up, the sharks are circling…I’m feeling happy again. Especially with the Trump-Russia mishegoss compounded by evidence showing that the FBI suppressed Russian intel while Comey torpedoed Hillary by reigniting the bogus email thing at the last minute. We’re looking right now at strong indications of secretive treasonous collusion with a hostile government run by an Al Capone-like gangster who ices his opponents. Plus a possible pee-pee tape! It’s a Tom Clancy novel, and it’s just starting to heat up. 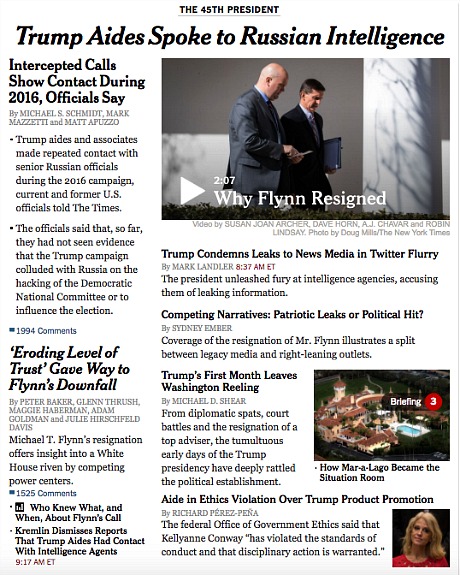