It was reported four months ago that duelling Janis Joplin pics are in preparation — one called Janis, about Joplin’s last six months of life (May through October of ’70) with Michelle Williams in the lead role.

There was another Joplin project that had been kicking around for six or seven years called Get It While You Can with Amy Adams attached or signed to play the fabled blues singer. But that ship has apparently sunk, according to relatively recent alleged statements by Adams and formerly attached director Jean Marc Vallee.

Would anyone in possession of a recent PDF screenplay for either project please send them to gruver1@gmail.com. I don’t care if Get It While You Can is dead — I want to read it anyway. Thanks.

Janis will be directed by Sean Durkin (Martha Marcy May Marlene) and produced by Peter Newman, who reportedly holds the rights to a good portion of Joplin’s music catalog and written materials. Before Williams came aboard Zooey Deschanel, Pink and Lili Taylor were going to play the Jop.

Get It While You Can had been starting and sputtering for years due to lawsuits and whatnot. Fernando Meirelles, Lee Daniels and Vallee were all going to direct at various stages in the journey. It would have apparently covered the whole sprawl of Joplin’s life from her miserable early days in Port Arthur, Texas to her accidental heroin-induced death on 10.4.70.

When you’re young you tend to laugh at anything that paints any kind of clown face on normality or the status quo. I was thinking this morning about how I couldn’t stop laughing when I was 18 or thereabouts when I drove by Art’s Hot Dogs, a little stand on Route 7 in Norwalk about a mile south of the Wilton town line, and noticed that some kid had hand-painted the sign so it read “FArt’s Roessler Hot Dogs.” For some reason this made my day. I was giggling about it for hours. Now if I happen to see a commercial sign that’s been defaced I feel badly for the owner — another thing to fix and make right. Then again if I was Art (or whomever owned the stand) I would have accepted from the get-go that every so often some high-schooler would paint the extra “f.” Only natural. In a way Art was asking for it. If I’d been Art I would have always kept paint on hand with one or two brushes, always ready to go. 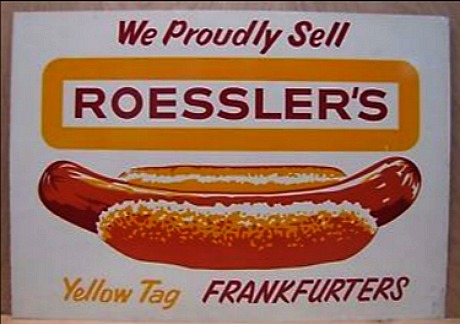 I’ve said this three or four times, but it can’t hurt to say it again. In Michael Mann‘s Collateral Tom Cruise‘s Vincent is literally the guardian angel of Jamie Foxx‘s Max. He’s tough love in a rough guise and a perfect suit. He jeopardizes and even threatens Max’s life once or twice, but ultimately he saves it. The motivator who finally gets through. And at the end, as he’s dying on a Los Angeles metro car, he’s one of God’s lonely men — “Think anybody’ll notice?”

Vincent: “Look in the mirror. Paper towels, clean cab, limo company someday. How much you got saved? Someday…someday my dream will come? One night you’ll wake up and you’ll discover it never happened. Because suddenly you are old. Didn’t happen and it never will because you were never going to do it anyway. You’ll push into memory then zone out in your Barcalounger, being hypnotized by daytime TV for the rest of your life. Don’t you talk to me about murder. All it ever took was a down payment on a Lincoln Town Car. Or that girl. You can’t even call that girl. What the fuck are you still doing driving a cab?”

Last night Manchester By The Sea‘s Casey Affleck and Michelle Williams engaged with The Hollywood Reporter‘s Scott Feinberg for a 95-minute chat at Santa Barbara’s Arlington Theatre. Everything was smooth and succinct and on-point — the time flew by. Casey and Michelle are nice, patient, open-hearted people, and this, ladies and gents, was more or less their last big-deal, award-season interview. Manchester director-writer Kenneth Lonergan presented the SBIFF trophies. Hats off again to Roger Durling‘s tech team for editing and delivering several interview clips the following morning — serious pros! 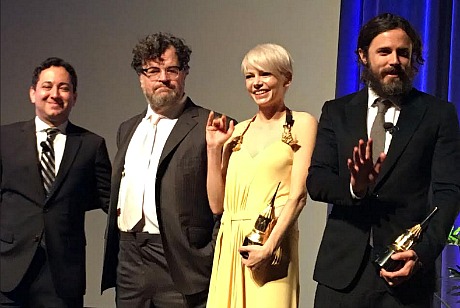 If John Wick: Chapter Two (Summit, 2.10) isn’t “funny”, what’s the point? I chortled and guffawed all through the original so give me that thing (i.e., a series of oafish funnybone moments punctuated by an occasional yaw-haw) or send me home.

I haven’t seen it, but in the view of Variety‘s Peter Debruge delivering man-chuckles may not be a top priority. He notes that the two John Wick flicks “accomplish what Hong Kong action fare did a quarter-century ago, seducing bloodthirsty (predominately male) audiences into appreciating an exquisitely choreographed modern ballet.” Rather than wallow in blunt carnage for carnage’s sake, John Wick: Chapter Two “achieves something more akin to dance.”

That’s cool but not enough, not for me. The Wick franchise is about dumb-fuck brutality made witty and occasionally hilarious by a smirking awareness of its own ludicrousness or, you know, a franchise absorbed by the mentality of an eight-year-old on Ritalin. Or even (can’t hurt to fantasize) a movie that would at its highest level be a kind of Duck Soup version of Grand Theft Auto.

Hell, why not try for a little Buster Keaton-like comic invention as Keanu Reeves sends way more than 75 guys (according to Debruge) to the pearly gates?

This is the second teaser for Pirates of the Caribbean: Dead Men Tell No Tales (Disney, 5.26), and they’re still being coy about showing Johnny Depp‘s appearance as Captain Jack Sparrow. They’ve waited until the last second to show him all caked with mud — obviously a sign of hesitation. It’s not as if Depp is some kind of exotic presence, but then again, the trailer implies, maybe he is as far as tradition is concerned.

As we all know over the last three of four years Depp has expanded into what could cruelly be described as Captain Fatass. Perhaps the CG slim-down software they’ll undoubtedly be using to make Depp appear like he did in the previous four Pirates of the Caribbean films (the first of which, Curse of the Black Pearl, opened 13 and 3/4 years ago) hasn’t been fully completed and refined yet.

Incidentally: The shot of the ghouls running across the surface of the sea isn’t bad. 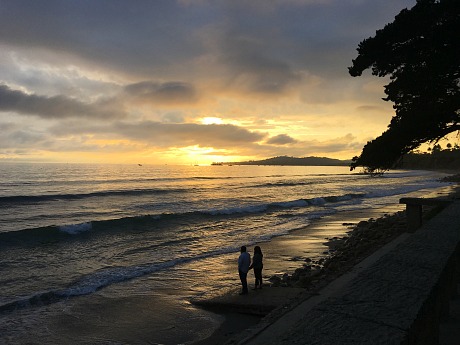 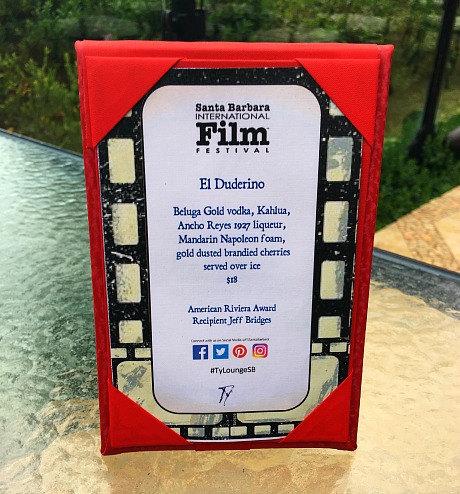 From a 2.4 Washington Post piece by Cindy Boren: “In one of the more unlikely developments surrounding a sports event, a Boycott Budweiser movement has taken root over the commercial that features an immigration theme.

“In a sepia-toned flashback, the company pays tribute to a German immigrant named Adolphus Busch who comes to St. Louis from Germany and decides to brew beer when he meets Eberhard Anheuser. Along the way, Busch faces taunts about how he doesn’t ‘look like he’s from around here,’ a message that comes on the heels of a controversial immigration ban imposed by President Trump.” 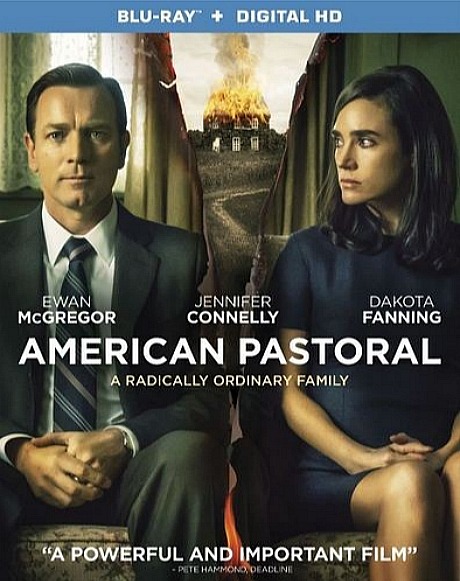 We don’t like goons at the Santa Barbara Film Festival. They’re not needed or wanted, and they just make everyone feel vaguely uncomfortable. For one thing they’re unnecessary — the SBIFF vibe is always loose and mellow and free of trouble of any kind. Last night’s goon [pictured below] was standing next to the stage in the right-front area, and I just knew that when it came time at the very end of the Virtuosos event to rush the stage in order to take snaps that this big fucking ape would probably block me. So I left early — who needs the aggravation? I understand hiring goons with infra-red scanners to guard against preview audiences from taking videos of unreleased films, but this concern obviously didn’t apply last night. Nobody was drinking, no one was rowdy or belligerent…why was this guy there? 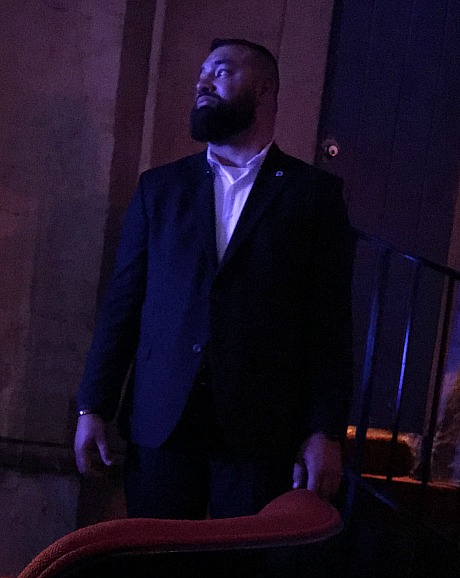 Florence Foster Jenkins‘ costar Simon Helberg, whose highly amusing performance as a self-deluding pianist should have been nominated for a Best Supporting Actor Oscar, was the funniest and most engaging of the SBIFF Virtuosos who were honored last night. The Big Bang Theory star was in his element and smooth as silk. Helberg is more of a witty ensemble guy than a lead, but he really needs to keep appearing in quality features.

I’m not a fan of Aaron Taylor-Johnson‘s absurdly demonic performance in Nocturnal Animals, and I was stunned when he recently won the Best Supporting Actor Golden Globe for this.  So I mostly just waited for his interview to be over. For what it’s worth I loved him in Anna Karenina.

Four years, 10 months and 15 days ago I embraced sobriety. Was this because I had a serious drinking problem? No — it was because a voice told me that if I continued to pour wine and beer into my system on a nightly basis (I quit the hard stuff in ’96) I might eventually come to resemble the present-day Steven Bannon. Honestly? If I did look like Bannon, if I saw that grotesque Luciferian puss in my mirror every morning, I would be sorely tempted to put a glock in my mouth and pull the trigger. [Apologies for accidentally wiping an earlier version of this post — I don’t know what the hell happened.] 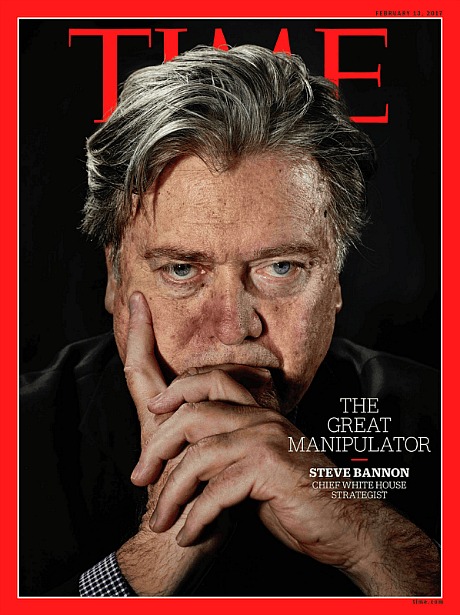