The question on Time‘s new cover arguably captures the cultural mood as closely as the famous “Is God Dead” cover did when it popped on 4.8.66. A little more than a year later, or sometime in the summer of ’67, Rosemary’s Baby director Roman Polanski took a shot of Rosemary (Mia Farrow) looking at the cover while waiting to see Dr. Hill (Charles Grodin), an obstetrician. The film’s story spans from late September of ’65 through June of ’66. (Ira Levin‘s novel was published on 5.12.67.) The film shows John Cassevetes‘ Guy watching a live broadcast of Pope Paul’s 10.4.65 visit to Yankee Stadium. And when Rosemary’s pregnancy is confirmed she’s told that the due date is 6.28.66. The visit to Dr. Hill’s office would have happened just before the June birth but the appearance of the Time cover is close enough, especially given that an April issue could have easily been in anyone’s waiting room a couple of months later. 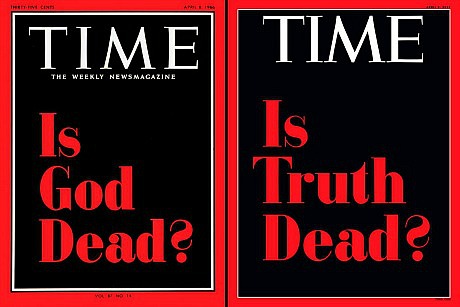 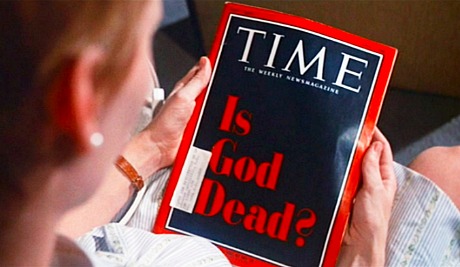 “There’s a stench of death about you. You carry it in your pack like the plague. Explosives and L-pills — they go well together, don’t they? And with you it’s just one thing or the other: destroy a bridge or destroy yourself. This is just a game, this war! You and Colonel Nicholson, you’re two of a kind, crazy with courage. For what? How to die like a gentleman. How to die by the rules. When the only important thing is how to live like a human being!”

Why don’t technically-sophisticated, state-of-the-art space vehicles in recent space flicks (Life, Passengers, Gravity) have the ability to track oncoming objects and/or debris and alter their flight path in order to avoid collisions? Remember the oncoming-Russian-missile sequence in Dr. Strangelove (“confirmed…definite missile track…continue evasive action”) and how Slim Pickens‘ B-52 banked and swerved and did all it could to avoid the missile? And how they managed to see the missile coming with this amazing technology called “radar”? Why can’t these space vehicles, 1000 times more technically advanced than an early ’60s B52, detect an approaching threat and commence evasive action (ducking, dodging, swerving) to steer clear of harm’s way? I’ll tell you why they can’t. Because the filmmakers like collisions. The rule in these films is that if an object or a debris field of some kind is coming your way, YOUR SPACE VEHICLE IS GOING TO TAKE A BIG HIT, period. No radar, no escape…it’s a demolition derby up there.

Daniel Espinosa‘s Life (Columbia, 3.24) is bullshit — an absolutely dreadful, soul-draining Alien ripoff. It’s basically just another CG display show (the monster is an unstoppable CG jellyfish-sting ray named Calvin) and an assurance of death among a crew of six on an International Space Station, and a question of how painful and gorey or grotesque their endings will be. We’re talking about rote handbook plotting, completely tired and 100% predictable…no snap, no freshness…unimaginative, uninvolving, checking my watch every 15 minutes.

Any critic who gives this thing a thumbs-up should never, ever be trusted again. Despite its first-rate CG and production values, Life is the very definition of a derivative piece of dogshit. On top of which Espinosa makes it perfectly clear at the finale that a sequel called Life: Eat The Earthlings is almost certainly in the offing. Don’t flatter yourself, pal. The only factor behind green-lighting this thing was a belief that the Calvin CG would be so cool that audiences wouldn’t be able to resist.

I was rooting for Calvin like my son Jett roots for the N.Y. Giants. For the cardinal sin of stupidity I wanted to see the crew members (Jake Gyllenhaal, Rebecca Ferguson, Ryan Reynolds, Hiroyuki Sanada, Ariyon Bakare, Olga Dihovichnaya) die horrible slithery deaths…”get them, Calvin!….get them!…die, actors, die!” And since I didn’t give a damn about any of them and was also bored stiff by Calvin (too omnipotent, too slithery, no weaknesses, no intrigue), the film seemed to take about two and half hours to end, even though the running time is 103 minutes.

Let’s say for the sake of argument that you and a slithery monster are sharing a space capsule that’s about to re-enter the earth’s atmosphere. You’re dead meat and you know it — no hope. But before the monster crawls into your mouth and transforms your bodily organs into currant jelly, you have a chance to make an adjustment. You can angle the capsule’s re-entry so that the heat shield doesn’t protect the capsule from the furnace-like conditions that occur during re-entry, which would cause the capsule to burn and melt and disintegrate into 10,000 flaming cinders. Which would kill the monster and save countless earthlings from a terrible fate.   If you have any heroism or nobility it’s the only thing to do. 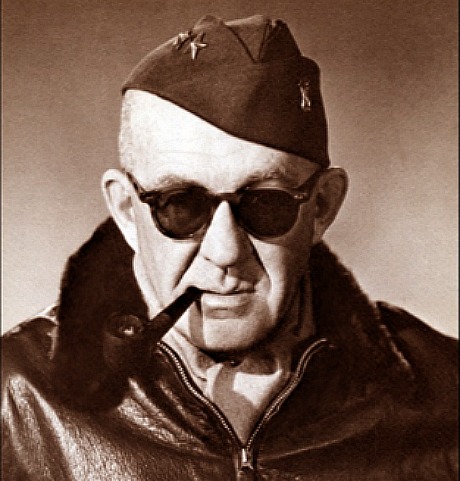 Cinemacon‘s Mitch Neuhauser announced earlier today that Big Sick star and co-screenwriter Kumail Nanjiani will receive the CinemaCon Comedy Star of the Year Award on Thursday, 3.30, inside Caesar’s Palace Colosseum. Congrats, but there’s still the question about whether anyone will remember Nanjiani’s name, much less how to spell it.

Every time I think of this dry-attitude comedian and Silicon Valley costar I say to myself “yeah, yeah, whatisname…karma Khalil Mangiafani…whatever.” Honestly — that’s as far as I get. But I’m working on it. I love Nanjiani’s droll, low-key performance in The Big Sick (Amazon/Lionsgate, 6.23), but I can’t get my brain to cooperate.

The trick in remembering a difficult name is to link it with something easy and familiar. Ten years ago I was having trouble remembering the name of former Iranian president Mahmoud Ahmadinejad, and then I read that Katie Couric, who had experienced the same problem, had learned it by saying “I’m a dinner jacket,” which mimics the cadence and some of the sound.

Except I can’t think of anything I know that sounds like Kumail, which I believe is pronounced “koo-mile.” This is a big stretch but all I can think of is Boy George singing “Karma Chameleon” or, even stretchier, the female Hindu god Kali, whom Eduardo Ciannelli‘s anti-colonialist “thugs” worshipped in George Stevens‘ Gunga Din. Or Khalil, a Palestinian terrorist played by Sami Frey in George Roy Hill‘s The Little Drummer Girl (’84).

I’m going to need a little time to figure how the Left Banke’s “Walk Away Renee” relates to Martin McDonaugh’s Three Billboards Outside Ebbing, Missouri (Fox Searchlight, sometime this fall). But it’s obvious Frances McDormand is going to be a Best Actress contender — tough-talking, grief-struck mom puts a pair of Trump Country lawmen (Woody Harrelson, Sam Rockwell) through hell because they’re more concerned with giving black guys a hard time than finding the person who raped and murdered her daughter.

McDormand’s last big score was in HBO’s Olive Kitteridge; her most acclaimed screen performances have been in Moonrise Kingdom, Burn After Reading, North Country, Almost Famous and — her crowning glory — Brainerd police chief Marge Gunderson in Fargo, which opened 21 years ago.

On 10.21.16 an HE tipster who’d attended a Three Billboards research screening called it “an incredibly smart, dark comedy with a great script.”

By all appearances Melanija Knavs agreed to a devil’s bargain when she married Donald Trump in 2005, and in so doing became Melania Trump.

In exchange for the usual conjugal access and bearing Donald a son (Barron William Trump) as well as looking hot and serving as her husband’s ceremonial arm candy, Melania was rewarded with a life of immense luxury and wealth. All marriages are negotiated deals of one kind or another — you get this, I get that and we’ll have each other. The apparent difference when it comes to Donald and Melania is that neither seems to care about the “we’ll have each other” part.

The seeming hollowness of the Trump arrangement has been sketched out by Us magazine in a non-bylined 3.22 story, and if it feels semi-credible it’s because the portrait provided — that of a chilly, all-but-loveless marriage — confirms what most of us suspect anyway.

Quote #1: “Melania does not keep hidden from everyone around her how miserable she is.” Quote #2: “They have separate bedrooms…they never spend the night together…ever.” (Another source says they do sleep in the same room but keep separate beds.) Quote #3: “Melania wants as little to do with Donald as possible…she is not interested in Donald, the presidency or anything involving him.” Quote #4 from Melania rep: “It’s unfortunate that you are going to feature unnamed ‘sources’ that have provided fictional accounts.”

Key Wikipage anecdote: “In February 2017, Melania Trump sued Mail Media, the owner of The Daily Mail, seeking $150 million in damages over an August 2016 article which alleged that she had worked for an escort service during her modeling days. The Mail had already retracted the article and apologized. The lawsuit claimed the article had ruined her ‘unique, once-in-a-lifetime opportunity’ to establish ‘multimillion dollar business relationships for a multi-year term during which Plaintiff is one of the most photographed women in the world’. On 2.18 the lawsuit was amended, omitting the language about her earning potential and focusing instead on emotional distress.”