Recent e-mail from critic friend: Walter Hill‘s The Assignment (Saban, 4.7) is a real grindhouse sleeper. It deserves to find an audience. I know it’s taking heat from the LBGTQ community for ‘exploiting’ the issue of gender reassignment surgery etc. But I don’t recall the same complaints when Pedro Almodovar covered more or less the same territory, brilliantly and even more luridly, in The Skin I Live In. Michelle Rodriguez is terrific as the male gangland assassin transformed into a woman by Sigourney Weaver‘s mad scientist (Dr. Frankenstein meets Dr. Moreau) in full-throated Hannibal Lecter mode. It’s much better than anyone except for Todd McCarthy and a few others have let on.”

Posted on 9.17.16 from Toronto: “I just saw it, and it’s nowhere near as problematic as I’d been led to expect. Pulpy and crude, yes, but fairly intelligent, a little slow but far from ludicrous, and generally not bad. It’s way, way better than either of the Sin City flicks. Michelle Rodriguez with a beard looks like Oscar Isaac in Inside Llewyn Davis. I suspect that those time & place title cards along with those animated freeze-frames were tacked on in post. It also seems as if those Tony Shalhoub-interviews-Sigourney Weaver exposition scenes might have been shot after principal photography. I’ve already mentioned that the plot bears a certain similarity to Pedro Almodovar‘s The Skin That I Live In. If Sam Fuller was still around he could’ve made something like this.”

The President Show (Comedy Central) kicks off on 4.27. Anthony Atamanuik does an excellent Trump, but Trump himself “does” Donald Trump. He’s his own parody. And how do you pronounce Atamanuik? (Like “automatic” without the “t” and ignoring the “u”, I’m presuming.) If I’d been in Atamanuik’s shoes I would have changed my last name to “Atomic” or “Adverse.” There are many, many people out there who don’t know who the late Vaughn Meader was. The poor guy’s bigtime career lasted a year and a half, from the spring ’62 release of “The First Family” to 11.22.63.

From Meader’s Wiki page: “According to several sources, Lenny Bruce went on with his 11.22.63 nightclub show as scheduled. Just hours after Kennedy’s death, Bruce walked onstage, stood silently for several moments, then said sadly, ‘Boy, is Vaughn Meader fucked.’ The joke proved true. Meader discovered that he was so completely typecast as a Kennedy impersonator that he could not find anyone willing to hire him for any of his other talents.”

I used to get stomach aches when I was seven or eight. I would eat too much of my grandmother’s cornbread and wind up groaning in my bed at 2 am or even throwing up. I haven’t suffered a stomach ache since. Occasional fevers but never any need for Maalox, Pepto Bismol, Ranitidine. Until last night, I should say. Today was worse. It felt like a hot copper coil was sitting in my stomach. My first thought was a possible ulcer, but don’t ulcers manifest gradually? Then I thought it might be stomach cancer, but that seemed overly dramatic. All I know is that I’ve felt weak all day (napped once) and barely able to write. As I noted 15 or 16 months ago, I don’t “do” illnesses as a rule. 10:30 pm update: Three or four hours ago “the pain stopped,” like Mia Farrow said in Rosemary’s Baby. I’m out of the woods. 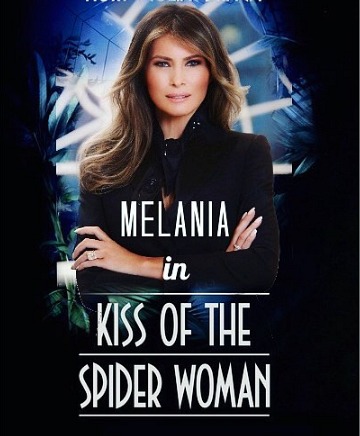 Deadline‘s Mike Fleming reported earlier today that Catherine Hardwicke may direct a Sony-financed remake of Gerardo Naranjo‘s Miss Bala, which I went nuts over when I saw it at the 2011 Cannes Film Festival. Gina Rodriguez (the CW’s Jane The Virgin) will play the beauty contestant (Stephanie Sigman in Naranjo’s version) who gets dragged into the grotesque intrigues of a Mexican drug gang.

One, why did Hardwicke and Hollywood wait for six years to remake this thing? If a foreign film is adaptable for the U.S. market, producers knows this within days of its first festival screening and are usually all over it, and Miss Bala was highly praised, nominated for Best Foreign Language Feature. Two, Hardwicke is probably going to make it into something fairly different from Naranjo’s drug-dealer melodrama, which basically played like an early ’60s Michelangelo Antonioni film. And three, the Antonioni treatment is why Miss Bala felt like such a knockout. Remove the arthouse element and you just have a kidnapping action drama.

HE tweet from September 2011: “Naranjo has totally ignored the chaotic action aesthetic of Michael Bay and his acolytes, and delivered an action thriller with a truly elegant visual style. Long shots and almost no cut-cut-cut-cutting.”

April 4, 2017 2:50 pmby Jeffrey Wells
22 Comments
Acting For The Audience Rather Than Engaging With The Reality Of A Scene

Yesterday’s “Greatest Female Villains” post led me to this Fatal Attraction clip, and a realization of how unrealistic and miscalculated Michael Douglas‘s acting is in this scene.

Like any husband who’s indulged in an impulsive weekend affair Douglas would naturally be focused on keeping his wife, played by Anne Archer, in the dark. However angry he might be about finding Glenn Close chatting with her, not getting busted would be absolutely paramount. The normal way to handle this situation would be to play along, be polite, adopt a pleasant demeanor and not give Archer the slightest reason to suspect that something’s up.

But Douglas, performing under the direction of Adrien Lyne, plays it the stupid way. He’s rude and sullen, giving Close a death-ray look and saying as little as possible. In the real world Archer would spot in a second that Douglas and Close not only know each other but that some kind of bad business might have gone down.

Lyne didn’t care about that. He wanted Douglas to echo the same negative emotions that the audience was going through when they saw Close sitting with Archer, and to hell with anything else.

This, in a nutshell, is what mediocre directing and acting are all about. Ignoring recognizable human behavior and focusing on goosing the audience.

The latest HE header logo is the old logo with the photo switched out. I’m fine with this. Site re-designs are traumatic — people always recoil and complain and ask “what was wrong with the original?” — so it’s good to keep the same old thing at the top.