Support on Patreon Follow @wellshwood
63 Comments
Still Twitchy, Still Haunted…Aacck!
May 4, 2017 3:18 pmby Jeffrey Wells
3 Comments
“How Does A Girl Like You Get To Be A Gigantic Praying Mantis?”

Before debuting June 9th on Showtime, Mark Kidel‘s Becoming Cary Grant will screen at the Cannes Film Festival. The title suggests a look at how the legendary film star found his professional footing or, you know, how he developed his on-screen persona. But the trailer indicates it’ll largely be about how Grant grew past his personal demons, and particularly how his LSD trips of the late ’50s and early ’60s changed his life entirely.

In short, it appears to be a documentary version of “Cary In The Sky With Diamonds“, the July 2010 Vanity Fair piece by Carl Beauchamp and Judy Balaban that covered the same turf.

I am definitely catching this in Cannes. Because I know all about those lysergic acid realms.

From “Nirvana Flow-Through“, posted a year ago: “I would always describe what LSD did to my brain as a kind of blissful washover that freed me from everything I’d learned in school and thereby delivered radiant truths. The usual mental associations and thought patterns were rescrambled by my senses turning all tingly and Technicolored — an elevator-in-the-brain-hotel sensation leading to heightened sensitivity. Which led to the opening of Dr. Huxley‘s doors of perception and the gates of prana.”

My rough understanding is that the House repeal of Obamacare, enacted today by a slim majority of Republican assholes, (a) will not survive the Senate, and (b) may trigger a decisive backlash that will cost a lot of Republican Congresspersons their seats. Hell, it may even cost those fuckers their House majority and thereby pave the way for an eventual Trump impeachment.

From N.Y. Times account: Senator Chuck Schumer of New York, the Democratic Senate leader, called the bill a “breathtakingly irresponsible piece of legislation that would endanger the health of tens of millions of Americans.”

“Members have been asked to vote for a bill that is particularly treacherous, that is going nowhere in the Senate,” said Representative Charlie Dent, the Pennsylvania Republican who has led the opposition among moderates. “This legislation will be gutted and we will have voted for a bill that will never become law. Will it cause headaches for people? Absolutely.”

“The upside for Republicans is that they can return to their districts and tell G.O.P. voters that they acted on a campaign promise,” said Nathan Gonzales, the editor of Inside Elections. “The downside is that the alternative may not go far enough for base Republicans, may go too far for moderate voters, and create a backlash that puts the House majority at risk in 2018.”

Morning Joe began in ’07, at which point the co-hosts were married to other people. At some point something began to happen, Scarborough divorced his second wife in ’13, and then Brzezinski divorced her husband in ’15. (Although it was first reported in June ’16.) Fox reports that Joe and Mika “are adamant that there was no impropriety in their relationship, that their marriages ended of natural causes.”

I’m sorry but that’s almost certainly bullshit. I’m not saying Joe and Mika did the deed before their divorces were finalized, but extra-marital wanderings are often decisive factors in any marriage headed for dissolution. Marriages almost never end without some degree of subterfuge and/or dishonesty about what’s really going on. Nobody gets a divorce and then embraces the next romantic partner in this sequence — things almost always happen the other way around, and more often than not in an untidy way.

It usually goes like this: (a) destined-to-be romantic partners feel the chemistry, strike a match, throw a little kindling on, (b) extra-marital currents get stronger and stronger, and then it’s suddenly a “thing,” (c) the infidel frets about how to break the news, and then frets and frets some more, (d) the infidel’s divided feelings are sensed, of course, by his/her partner, (e) eventually arguments ignite and the woundings increase, and (f) a divorce finally happens, especially if the extra-marital thing is any kind of bonfire.

Yesterday afternoon I wrote that I was crestfallen over an aspect of HE 2.0, which uses a wider column (640 pixels) than classic HE (460 pixels). It broke my heart that thousands of photos posted over the last 13 years (August 2004 to early May 2017) would henceforth be sitting flush left with a big dumb white space sitting to the right. Well, right after that Louisville-based WordPress specialist Dominic Eardley suggested a CSS solution, and 90 minutes later the great Sasha Stone figured out a fix. All classic HE photos will now be centered when HE 2.0 steps out of the cage, which may be later today. Or tomorrow. Playing it by ear.

Barack Obama‘s video endorsement of French presidential candidate Emmanuel Macron popped a few hours ago. Good call, but here’s the passage that got me: “I have admired the campaign that Emmannuel Macron has run…he has stood up for liberal values.” Does anyone remember Obama celebrating liberal values at any time during his eight-year presidency? I recall his avoiding the “l” word like the plague. Am I wrong? It’s nice, in any event, to hear him acknowledge the badge.

14 Comments
Man Of Wealth And Taste

Nice jacket, Charlie. Looks warm. I think I saw it in Barney’s last December. Obviously not in keeping with apparel commonly worn by Arthur and his mates, but Guy Ritchie is reimagining that period…tossing the salad. Which goes hand in hand with the Led Zeppelin tracks. King Arthur: Legend of the Sword (Warner Bros., 5.12) will screen next week in New York and Los Angeles (and perhaps elsewhere) for people on my level.

In a just-posted interview with GQ‘s Michael Paterniti, Brad Pitt announces that he’s turned away from booze and (I think) pot, which Pitt legendarily inhaled for 25-plus years. The interview is like an AA confession. Clean and sober, a new life…for now. Pitt calls it a “season” that he has to “run off a cliff,” but good for him anyway. I knew six days in (my sobriety began on 3.20.12) that I’d be clean for life, but we all follow our peculiar paths.

Pitt: “I do remember a few spots along the road where I’ve become absolutely tired of myself. And this is a big one. These moments have always been a huge generator for change. And I’m quite grateful for it.”

HE Overview:  Everybody drinks and parties for 20, 25 years. From their late teens to their early to mid 40s. But you can’t keep that shit up. Cut back, dial it down, embrace sobriety…whatever. But if you don’t rethink it or downshift to some extent, you’re likely to be in some kind of trouble by your early 50s. I speak from experience.

Pitt: “I can’t remember a day since I got out of college when I wasn’t boozing or had a spliff, or something. Something. And you realize that a lot of it is, uhm…cigarettes, you know, pacifiers. And I’m running from feelings. I’m really, really happy to be done with all of that. I mean I stopped everything except boozing when I started my family. But even this last year, you know…things I wasn’t dealing with. I was boozing too much. It’s just become a problem. 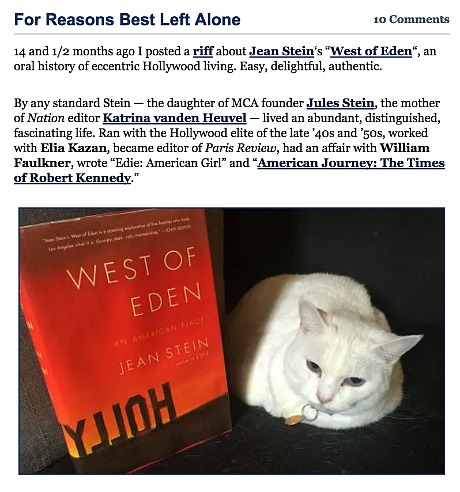 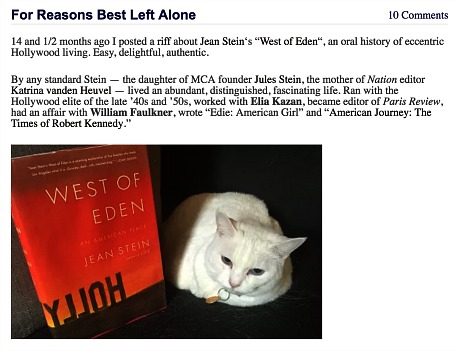 The Dark Tower is based on an eight-book Stephen King series that began in 1982. It also feels deja vu-ish as a motherfucker, and for good reason. It’s another name for Barad-dur, the fortress of Suaron in J.R.R. Tolkien‘s “The Lord of the Rings.” It’s the title of a 1987 horror flick starring Jenny Agutter. It’s the name of an early ’80s board game. Ditto a 1943 British thriller starring Herbert Lom.

Which is probably why, sight unseen and no offense, I feel all Dark Tower-ed out.

GRAHAM: "Is it fair to say that the Russian government is still involved in American politics?"