“Few Americans serve in uniform today, by design. Our all-volunteer force neither wants nor needs more than a couple hundred thousand recruits each year. Most Americans appear to feel comfortable with this relationship, whereby others serve and sacrifice in a well-compensated military so that they may continue to enjoy life uninterrupted. It may feel good to salute the troops at baseball games, or say you love them through other patriotic expressions, but those gestures are insufficient and fleeting. Supporting the troops starts with understanding who they are and what they do. Watching Thank You for Your Service is a good start.” — from a supportive Slate piece by Phillip Carter, posted today at 5 pm. 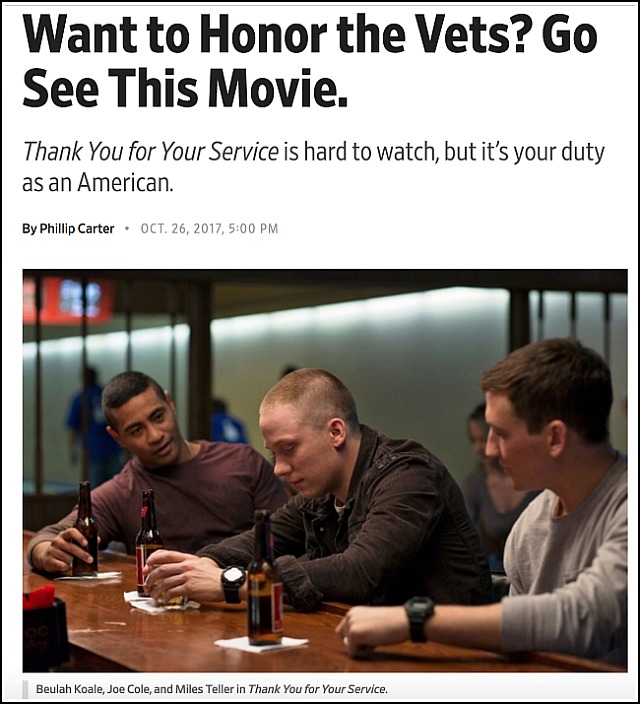 It’s after 7 pm Eastern and we’re still waiting for the long delayed JFK assassination files to be released. Maybe this evening; maybe not. It appears that some of the files (roughly 200 out of 3000) will be held back for six months due to redaction requests from the CIA and FBI. All this delay, all these decades and they couldn’t get things ready for the deadline. Slackers. Foot-draggers.

Jefferson Morley‘s jfkfacts.org and maryferrell.org are two of the most respected JFK assassination sites around. In a 10.25 piece for Alternet, Morley stated that “the most significant story in the new JFK files will be details of the CIA’s pre-assassination monitoring of Oswald,” which were allegedly known to and under the control of CIA spook James J. Angleton. If Trump approves CIA and FBI requests to withhold some records, the JFK files that Trump keeps secret will be more important than the ones he releases.”

Dee Rees‘ Mudbound (Netflix, 11.17), a ’40s period piece about racial relations amid cotton farmers toiling in the hardscrabble South, is a heart movie. It’s about community values, hard work, compassion or a lack of, racial resentment on both sides and the eternal struggle to survive among the dirt-poor.

As such it bears more than a few resemblances to Robert Benton‘s Places In the Heart (’84). The Benton is far, far superior — better story, more skillfully written, more emotionally affecting. But three Mudbound performances — given by Mary J. Blige, Jason Mitchell and Carey Mulligan — are quite special and almost redeeming.

Three Billboards costar and likely Best Supporting Actor nominee Sam Rockwell to Variety‘s Kris Tapley [4:20]: “I couldn’t survive El Lay as a struggling actor so I had to go back to New York. I say to actors there are two El Lays. There’s El Lay when you’re successful, which is fabulous. And then there’s El Lay when you’re not, and that’s not a good El Lay. So New York was a little easier [or at least] it was back [in the ’90s].”

I’ve been a Sam Rockwell fan for ages. He’s primarily known for playing loopy eccentrics or crazy fucks. He plays a somewhat more interesting character in Three Billboards outside of Ebbing, Missouri — Jason Dixon, a small-town, none-too-bright deputy who screws his life up with violence and stupidity, and then actually self-reflects and grows out of a place of despair and self-loathing. And you admire him for that. This is why, I suspect, Rockwell is looking at a likely Oscar nomination.

But his two most likable performances, for me, were variations of droll — Owen, a droll father figure type, in Nat Faxon and Jim Rash‘s The Way, Way Back (’13), and Craig, a droll single dad and a possible romantic attachment for Keira Knightley, in Lynn Shelton‘s Laggies (’14). And he was even more winning as the perversely droll Mervyn in Martin McDonagh‘s A Behanding in Spokane, a B’way play that happened in 2010.

So in my mind Rockwell’s forthcoming nomination is about Jason, Owen, Craig and Mervyn all rolled into one. Plus the dancing thing.

By the way: New York City is a better place to be if you’re in a marginal, existentially gloomy place. The mass-man density of it all — the skyscrapers, asphalt canyons, grubby subways, churning swarms of humanity everywhere you look — allows you to dissolve into the crowd, to bury yourself in solitude and despair. But you still need a lot of money to get around. Too damn much. I’ll never live there again.

Then again there’s nothing like a lonely life in Los Angeles to make you think despondent thoughts and truly embrace the gloom. I think I can definitely say that any place in the world is better if you have a good income, and that almost any place sucks if you’re under-employed and struggling.

If I didn’t have this daily column to bang out and I had a flush fixed income, I could be very happy living in Paris, Rome, London, Munich, Berlin, Hanoi or Prague.